Last month I participated in Hacktoberfest. I made four contributions to open source projects. I learned a bunch, got more development experience, and solidified a bond with open source. 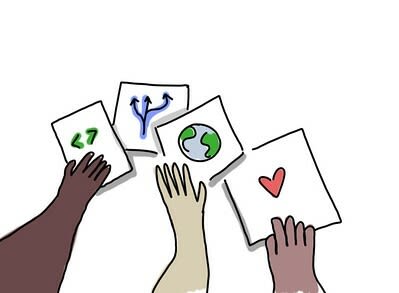 2021 was the eighth year Hacktoberfest rocked and rolled. Last year there were 166,057 PR's merged and this year probably eclipsed that!

Open source has always intrigued me and I jumped into making contributions before Hacktoberfest. Having gone through Hacktoberfest I can say that it lit a spark under me.

I did brand new things like create a robots.txt file. Never knew about them before! I made that file for an Elm project. I had never heard of Elm before.

The magic behind Hacktoberfest and open source runs deep. Not only are there new languages, techniques, and concepts you can indulge in, there are amazing maintainers and contributors you can collaborate and learn from.

I had Zoom sessions with two project maintainers. They were both super helpful, upbeat and willing to help in any and every way. Shout out to @kirkcodes and @nickytonline 🙌.

Kirk's project was the Elm game I made a robots.txt for. Not only was he helpful with any questions I had, he gave me a great overview of Elm! I had done some research on it, but hearing more about it from someone using it shed even more light on Elm.

Nick's web3 starter project accounted for two of my contributions. The second of the two issues was trickier than the first. I needed to get Storybook working with webpack5.

This is a relatively new setup and Nick made updates to his code-base that helped smooth things out. After hitting roadblocks on my own I jumped on a call with Nick, pulled in recent changes, and got it running smoothly.

Pair programming is a part of working on any team and these were great examples of the power it yields. Open source can offer these important experiences for any developer at any level.

Going forward I'll do Hacktoberfest every year. It's an opportunity to work on new projects, skills and with folks you may have never worked before.

Open source doesn't just open its doors in October either. Contributions can be made all year round.

There's a special energy that emanates when everyone is diving into open source collectively. Hacktoberfest and the community at Virtual Coffee made it special.

No matter what time of year it is, find projects you'd like to contribute to. Ask to be assigned to an issue, work and seek help as needed, and get your PR merged like a boss!

Quickest method to have webpack recompile your files