Understanding the meaning of Class is perhaps the very first step to take when diving into Object-Oriented Programming.

In this article we will use a very basic example written in Java to explain the concepts of Class, Object, methods and variables.

a dog called Muffin is talking.

In our fictional world, we know that:

we can use Object-Oriented programming to describe the previous scenario in terms of code.

Breaking the scenario into actor and action, as we did, can help us better understand the meaning of Class and class method.

We can usually refer to the Class as being our actor, while the method describes some kind of action. Lastly, the variable can be seen as something that "belongs" to our actor.

Let's now convert into code what we have seen before, step-by-step, starting from our actor:

we just created a class called Dog.
Forget about the public keyword, for now. Just assume that it means our class will be accessible from anywhere in our program.

Let's go ahead. We want to make it possible, for a dog, to have a name:

finally, our dog will be able to talk:

As for the public keyword, do not focus too much on the void keyword, it just means that our method does not return anything, it only prints something to the console. However, this will be covered more in-depth in another tutorial.

Here is a view of our project so far:

We are not finished yet! The thing is, what we did so far was only designing a blueprint for real-life dogs, without actually creating any of them.
And here comes the concept of Object.

An Object is a class instance.

In our example, it would be a dog "coming alive" with his own name.

Let's create a new class that we will call DogDemo.
This class will be responsible of using our Dog class to create actual dogs, making them talk as well.
The class will have a single main method to perform these operations.

Try to only focus on the content inside the main method (don't worry about all that strange keywords public static void String[] args, for now):

Inside the main method of our demo class, we just made a dog called Muffin come alive.
We created a new Dog() and assigned the name Muffin to his instance variable name.
Finally, we invoked the talk() method on the class instance.

Here is our updated project:

At this point, to see the output of our program, we need to run the main method of our DogDemo class.

Let's do that by using the command line.

From the root directory of the project, launch these:

Here is the result of running them from the integrated IntelliJ terminal: 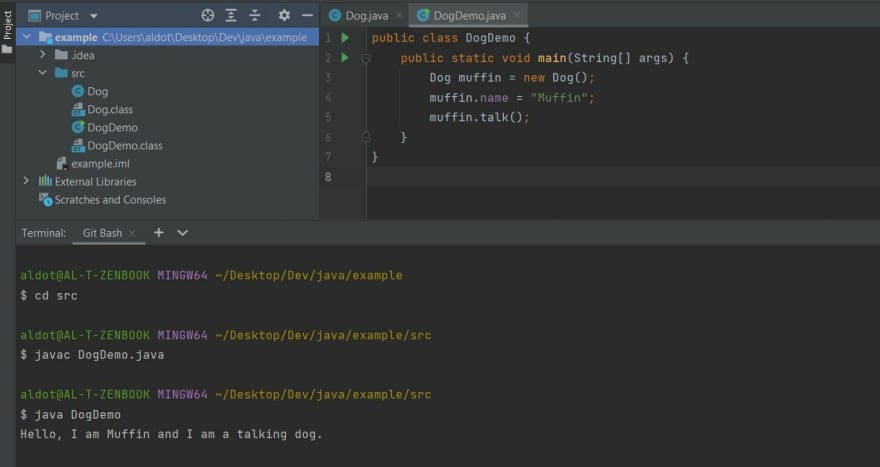 As you can see, the final output is the one we were expecting: our dog talking.

Note that two new files appeared within our project: Dog.class and DogDemo.class. These were generated by the compilation command, and executed in the third step.

This example was intentionally simplified in order to convey the meaning of Class and Object. There are a few concepts that are missing, in addition to the mentioned ones, and above all: constructor, getters and setters, that will be covered very soon in another tutorial, by following the same example. They will specifically impact the way we created the Dog instance and assigned the name to our dog.

And that was our first dive into the world of Object-Oriented Programming!

Let me know if you found this example useful to grasp some of the basic OOP concepts, any feedback is welcome, just leave a comment below!

How to create a simple SFTP server using java stack

Once suspended, aldotele will not be able to comment or publish posts until their suspension is removed.

Once unsuspended, aldotele will be able to comment and publish posts again.

Once unpublished, all posts by aldotele will become hidden and only accessible to themselves.

If aldotele is not suspended, they can still re-publish their posts from their dashboard.

Once unpublished, this post will become invisible to the public and only accessible to Aldo Telese.

Thanks for keeping DEV Community 👩‍💻👨‍💻 safe. Here is what you can do to flag aldotele:

Unflagging aldotele will restore default visibility to their posts.