Some days ago I found a course about computer science called Structure and Interpretation of Computer Programs, and I've been learning many interesting things through it. Data directed programming is one of the topics I would like to share with you today.

In the following post we're going to create an interpreter for arithmetic operations using complex numbers. So if you like maths and Lisp keep reading the post, and if not, you will see some cool concepts anyways!

Therefore, we have four important constants, x, y, magnitude (R) and angle (a).

Let's start to define the operations. For this example, we're going to use the addition and multiplication.

Enough of maths! Now that we know how a complex number is represented and how the operations are done, we are ready to start the development of the interpreter!

First, we need to take an important design decision, how are we going to represent the numbers? The rectangular form seems to be a pretty straightforward implementation. Therefore, complex numbers will be represented using an ordered pair with the real-part and the imaginary-part (x,y). To find the angle and the magnitude, we should use the trigonometric relations.

The solution was running well, but after a few months our partner Hal implemented other strategy. He chose the polar form (r,a) for representing the complex numbers.

Both solutions are ok. Non of them is better but now we have two incompatible representations because we're duplicating the definitions. Now we want both representations to coexist, without interfering with each other.A picture is worth a thousand words, so let's take a look to the system structure that we would like to create. 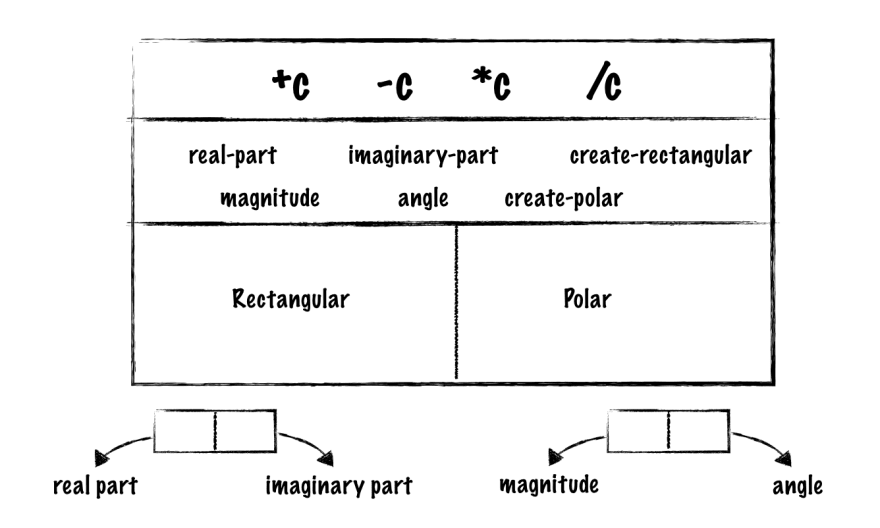 The interpreter is divided in 2 layers, one for the operators, and the other for the representation of complex numbers.

The operations in the middle abstract layer (real-part, magnitude, angle, imaginary-part) should work without being affected by the different definitions of complex numbers. Therefore, this layer should acts as an interface. But how can we achieve this behaviour? What if we tag the data with the type in the following way? 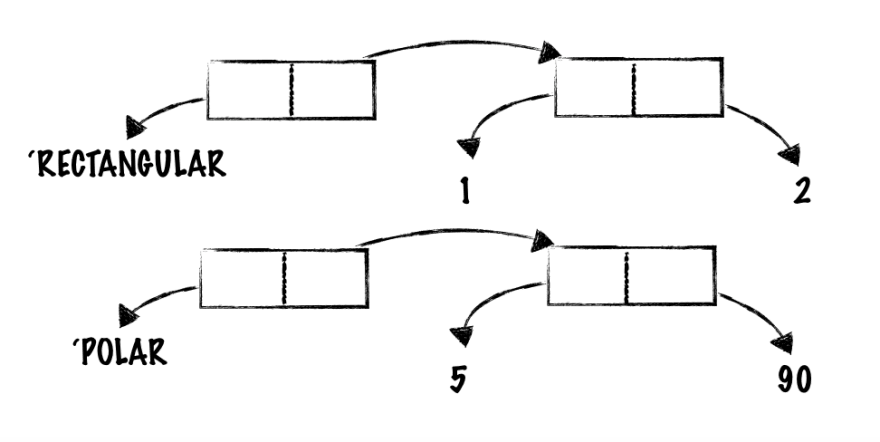 In order to manipulate this tagged data, we should implement a function that attaches the type to any content.

Where can we add this types? Constructors sounds like a good place to do it! Let's refactor both representations

Two main changes have been implemented in this refactor.

Regarding the operations +c *c, we can still use them. Since each representation works well in different scenarios, lets use both of them.

Once the data was tagged with each type and once we have different functions for both representations, it's possible to implement a *Manager that will take care of calling the corresponding function.

Each function will check the type of the data received, and after that, the Manager knows which representation should be called. In each case, the parameter of the called function will be the content of the data.
This technique receives the name of Dispatching on type, we use it to keep the modularity of our system.
Anyway, this solution has two main weaknesses

Is the manager necessary? It is responsible of calling different functions but it doesn't do much. In fact, it's acting like the following table

When it matches the type and the operator, it knows the correct function to apply.

Using put, each developer is responsible of mounting their functions to the system table in the following way

To get completely rid of the manager, we need to create an interface with the operators.

The advantage over the previous solution, is that we don't have a central point of control, in fact the responsibility is moved to each representation. They achieve that mounting themselves to the system using the function put. Moreover, if there are 100 hundred new representations of complex numbers, the above code won't suffer any change!
To fix the naming conflicts, now we're using lambda expressions.

To wrap up, for me it was the first time I heard about those concepts. Behind them, what we're really trying to do is to create a polymorphism for the representations.

I hope this example was clear enough for all of you! Normally, we're far from maths when we're working, but from my point of view, it's also interesting to mix programming and maths.

Furthermore, everything was implemented using lisp (scheme), which is a beautiful language =D (I know what you're thinking, you don't like to see many ()()() but you get used to them, I promise).

Striver's SDE Sheet Journey - #10 Find the duplicate in an array

Alan Campora
Software engineer from Argentina! I'm working as a FE engineer and from to to time I upload videos to my youtube channel https://www.youtube.com/frontendtopics
Thank You DEV 😊
#beginners #codenewbie #discuss #showdev
What Makes You Stay In A Community?
#discuss #community #watercooler
When can you declare yourself a Full-stack Dev?
#discuss

Once suspended, alancampora will not be able to comment or publish posts until their suspension is removed.

Once unsuspended, alancampora will be able to comment and publish posts again.

Once unpublished, all posts by alancampora will become hidden and only accessible to themselves.

If alancampora is not suspended, they can still re-publish their posts from their dashboard.

Once unpublished, this post will become invisible to the public and only accessible to Alan Campora.

Thanks for keeping DEV Community 👩‍💻👨‍💻 safe. Here is what you can do to flag alancampora:

Unflagging alancampora will restore default visibility to their posts.