I was amused by JavaScript ever since I saw the things that can be done using it and the ease, with what we can achieve such things. I've been working with React JS and Node JS for almost a year and a half now. Needless to say, I'm a big React fanboy.

Recently, I've started to understand what's really going on under the hood and behind all those layers of abstraction presented to us as developers. This revelation has made go back to basics and understand workings of JavaScript in detail 😲

Every time I look back at all the work I've achieved with JS without knowing really anything about its inner workings is really amusing to me. Please, take that as an ode to the JavaScript community. You guys are amazing 🙌

Note: In this article, I hope to cover introduction to JS and 4 topics/ features that intrigued me about JavaScript and made me an avid reader of MDN Web Docs and other JS related articles. It'll be useful for folks just getting started with JS or, it'll act as a refresher for the experienced.

I hope you too get inspired to understand this mysterious world of JavaScript 🌎 (or, just learn something new 😉).

Here’s a little introduction to JS from my personal favourite.

JavaScript is notorious for being the world’s most misunderstood programming language.

It is often derided as being a toy, but beneath its layer of deceptive simplicity, powerful language features await.( Async pun, eh ? 😜 )

JavaScript is now used by an incredible number of high-profile applications, showing that deeper knowledge of this technology is an important skill for any web or mobile developer.

Unlike most programming languages, the JavaScript language has no concept of input or output. It is designed to run as a scripting language in a host environment, and it is up to the host environment to provide mechanisms for communicating with the outside world.

Host environment is usually a browser.

JavaScript interpreters can also be found in a huge list of other places, including Adobe Photoshop, SVG images, server-side environments such as Node.js, NoSQL databases like the open source Apache CouchDB, embedded computers, complete desktop environments like GNOME (one of the most popular GUIs for GNU/Linux operating systems), etc.

JavaScript is a multi-paradigm, dynamic language with types and operators, standard built-in objects, and methods. Its syntax is based on the Java and C languages — many structures from those languages apply to JavaScript as well.

I’ll also point you to some articles, if you wish to read more. These can be features of ES6 or it’s predecessors.

What’s with the name ?

JavaScript was created in 1995 by Brendan Eich (Netscape Engineer). It was originally named Mocha and was changed to be called LiveScript, but it was renamed after a marketing decision that attempted to capitalise on the popularity of Java language at that point in time.

Netscape submitted JavaScript to ECMA (a European standards organisation), it resulted in the first edition of the ECMAScript standard that year.

The standard received a significant update as ECMAScript edition 3 in 1999, and it has stayed pretty much stable ever since.

So in conclusion, I believe JavaScript is considered the Language which implements a standard called ECMAScript.

JavaScript is the implementation of the standard that is, ECMAScript.

One of the most fascinating features for me personally

JavaScript only has one construct: objects. Each object has a private property which holds a link to another object called its prototype. 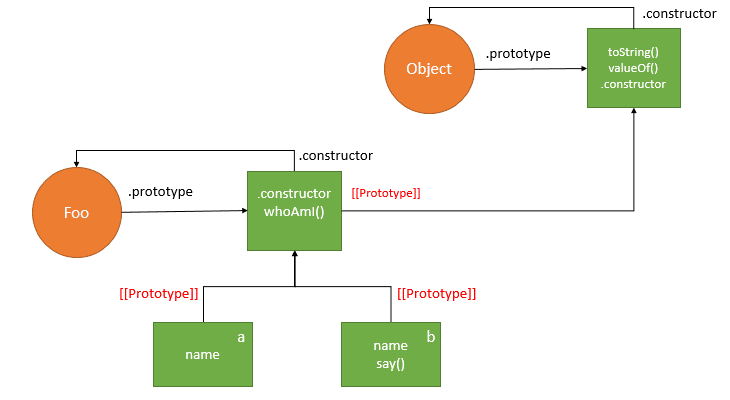 The prototype is a property on a constructor function that sets what will become the __proto__ property on the constructed object.

Now, tell me about classes ?

I'm gonna let you take it from here to find out more about classes.

this behaves a little differently in JavaScript compared to other languages. It also has some differences between strict and non-strict mode in Javascript.

The value of this remains at whatever it was set to when entering the execution context.

To pass the value of this from one context to another, use call, or apply:

ES5 introduced a new function for Function.prototype called the bind().

Calling func.bind(someObject)creates a new function with the same body and scope as func, but where this occurs in the original function, in the new function it is permanently bound to the first argument of bind

With the introduction of arrow functions this retains the value of the enclosing lexical context's this.

I can keep going.But, for more on this take a look at the MDN Docs. 😉

Note: Read about how this binding is only affected by the most immediate member reference.

Hoisting came in to picture or specification only with ES6.

Hoisting was thought up as a general way of thinking about how execution contexts (specifically the creation and execution phases) work in JavaScript.

A definition of hoisting might suggest that variable and function declarations are physically moved to the top of your code.

It's not true , the variable and function declarations are put into memory during the compile phase, but stay exactly where you typed them in your code.

Above example shows hoisting in action. Conceptually, how your run time sees it is.

A closure is the function bundled together (enclosed) with references to its surrounding state (the lexical environment).

Closure gives you access to an outer function's scope from an inner function. In JavaScript, closures are created every time a function is created, at function creation time.

Closures are usually used to give objects data privacy and to fix order of partial application of functions.

I hope this article got you inspired or curious to learn more about JavaScript.

Which functions/methods do you...

The Ultimate Guide To Software Engineering.