Question: There are a number of spherical balloons spread in two-dimensional space. For each balloon, provided input is the start and end coordinates of the horizontal diameter. your task is to burst all the balloons with a minimum number of arrows.
Eg: let suppose given array is the horizontal diameter of ballons : [[1,3],[2,7],[5,9],[2,9],[9,12],[8,10],[12,15],[11,13]] and your task is to find minimum number of arrows to burst all balloons.

Let's break it down.
1> Balloons can be seen as x-coordinates start and end points.
2> We're aiming for bursting as many balloons as possible in a single arrow.
3> This leads us to find all the balloons whose x-coordinates overlap so that we can cover maximum possible balloons.
4> Also note that inputs are not strictly increasing/decreasing start and end points, will sorting help us?

This is how balloons stack up.

From the above observation we can say that we're greedily choosing ballons that have common start and end point range.

Step 2:
We need a start and end points of the first balloon as the initial point.
end = balloon[0][1] //
count =1 // need at least one arrow to burst one balloon

Since balloon 4 was out of the range of the previous arrow, we need one more arrow to shoot down balloon 4, but at the same time we have to burst as many balloons as possible with it.

These observations will help us derive to our solution. 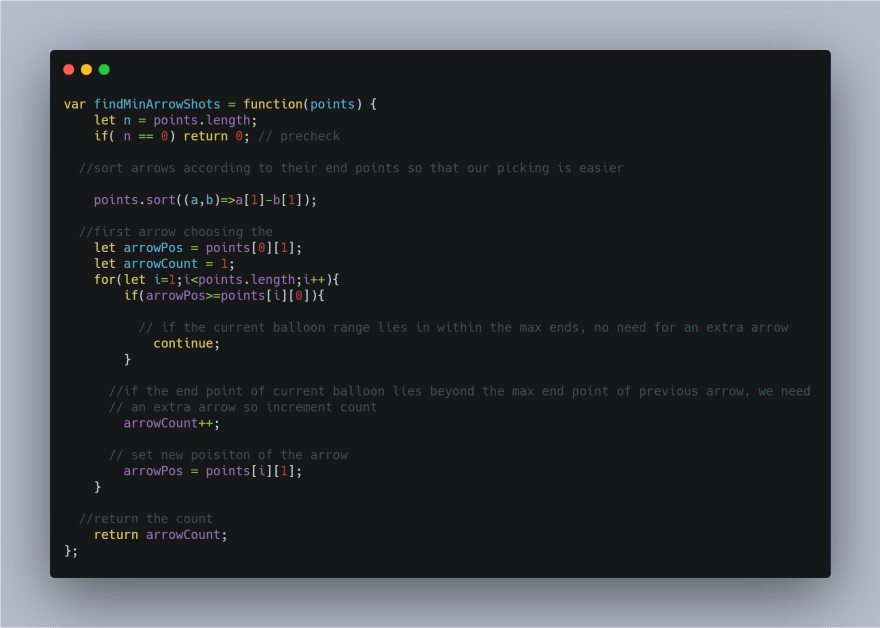 Now you know how to burst balloons