MVC stands for Model View Controller. MVC is a pattern that is commonly used for developing applications. This pattern allows the developer to compartmentalise various parts of application logic which helps in maintaining cleaner, sustainable and organised code.

The model is the application's dynamic data structure, independent of the user interface. It directly manages the data, logic and rules of the application.

The view deals with the user interface(text, images, videos etc). It's main job is to present the data to the user. An important principle of the MVC pattern is that the view is completely ignorant about the model. Views are often called dumb things/objects.

The view is the representation of information such as a chart, diagram or table.

An easy diagram to help visualise this 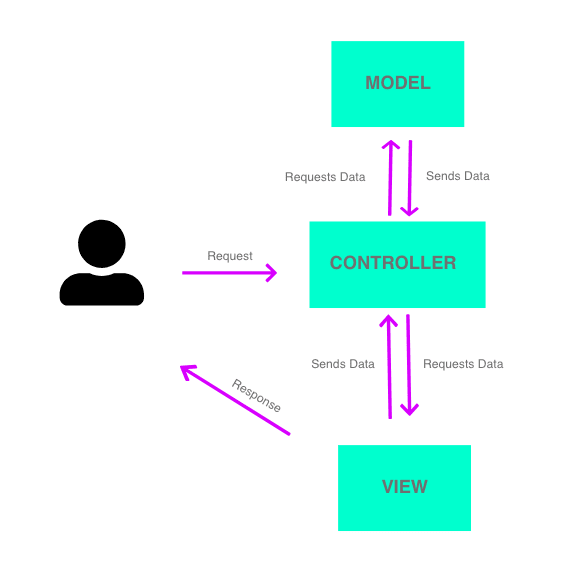 You might be thinking, all this is great but why should I use it? This is why -

These advantages are only a part of the story, a lot of the code we write does not belong in the model nor the view. You might read this and think that yah, no problem just dump it in the controller. Problem solved. Not really. After a while, you will end up with huge controllers with thousands of lines of code which will become imposible to read or test and we'll end up with a colossal mess.

Recently, developers have come up with a new pattern which is both similar yet different than MVC. It is the Model View View Model. I'm going to discuss this in my next post.

Once suspended, akashshyam will not be able to comment or publish posts until their suspension is removed.

Once unsuspended, akashshyam will be able to comment and publish posts again.

Once unpublished, all posts by akashshyam will become hidden and only accessible to themselves.

If akashshyam is not suspended, they can still re-publish their posts from their dashboard.