It was released on November 26, 2020. It is a major new version, which means that it will introduce some major changes, as well as many new features and performance improvements.

As this installation is for development and not for production, it is logical to use PHP 8.0 instead of PHP 7.4 and to test existing systems and their compatibility with this version, as well as the creation of new applications.

An installation of a Local Web Server in the wsl2 subsystem allows to have a true integrated Linux system with their files accessible from Windows and with Windows applications, in addition to sharing the clipboard to copy and paste between the 2 systems (with Ctrl + C / Ctrl + V) in an easier way than with a kind of type VMWare or VirtualBox virtual machine.

WSL2 is not a graphical Linux environment as provided in the default installation (for now) but as a web server it is not required at any time.

Even so, there are tutorials on the Internet to give you access to WSL2 through a graphical user environment (At the end of the guide, one of those procedures is used to allow user access in a graphical environment).

The server is accessed from the browser in Windows with the url: localhost or 127.0.0.1, but it can also be accessed from any other computer in the Local Area Network knowing the IP assigned to the Windows computer host of the WSL2 subsystem installed on that computer and that it also has an IP that is different from the Windows system (see the procedure at the end of the guide).

In the BIOS of the computer, the virtualization option must be enabled, just like when you want to run the virtual machines VMWare and VirtualBOX.

To see what the status of our hardware is, we will open the task manager by pressing the Ctrl + Shift + Esc keys at the same time (simultaneously) or by right-clicking on the taskbar and selecting the task manager option.

Once this is done, we expand the view and go to the Performance tab, where we can see the different views of the hardware installed on our computer and that is where you can see the text Virtualization: Enabled or not. 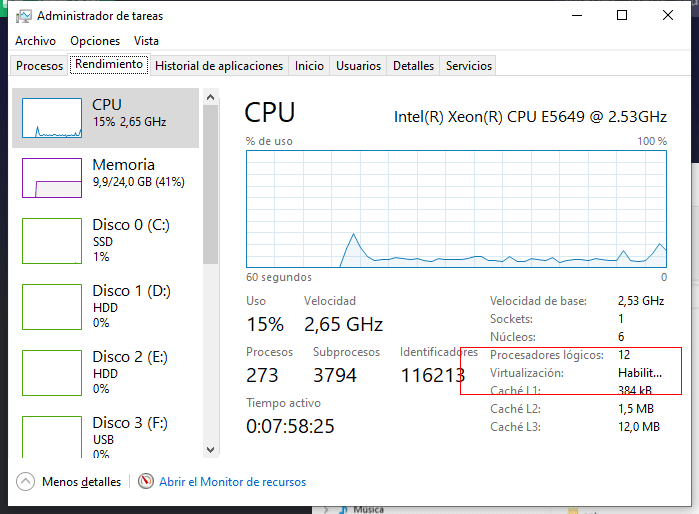 If this is not the case, you must start the computer and access the BIOS menu (see the computer manual) to enable this hardware feature.

There are systems that do not have this option available, which makes it impossible to install virtual machines on the system.
Verify that the version of Windows 10 is version 1903 or later by doing the following:
Windows key + R 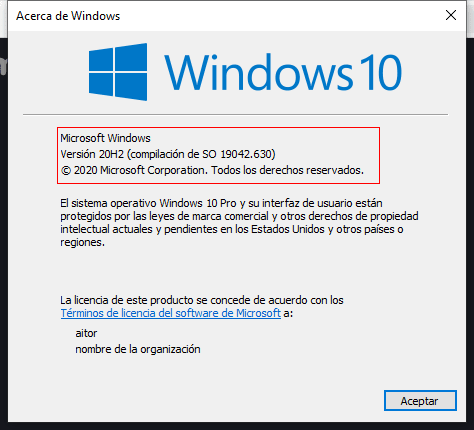 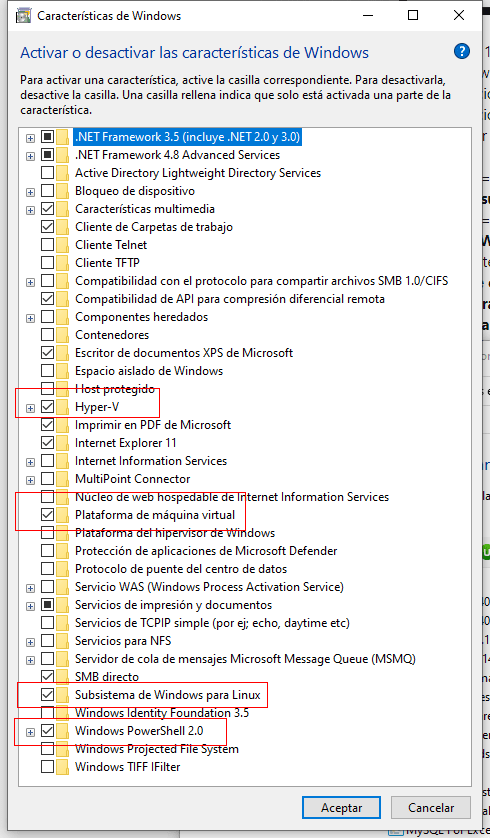 Open PowerShell
On the taskbar next to the Windows logo, type PowerShell.
The PowerShell icon will appear. Select the Run as administrator option.

Run the following statement to enable the Windows 10 for Linux subsystem in the PowerShell console:

Whichever option is used you must do the following afterwards:

In your internet browser download the latest version of the WSL2 linux subsystem with the latest updated kernel:

Execute the installation of the downloaded file by pressing the right mouse button on it and choosing the option to install.

Open PowerShell
With the same procedure as in the previous time.
To set wsl2 as the default linux system by entering and executing the following statement in the PowerShell console:

From the Windows Store look for LINUX and you can choose any ubuntu distro or others. 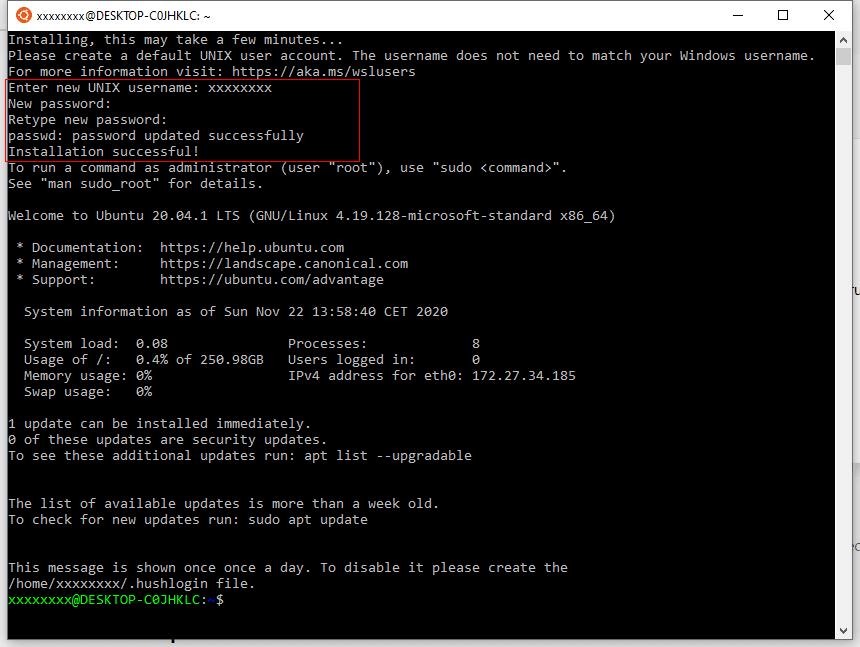 In the Windows PowerShell console you can check which version of wsl is active and which distro is installed with the command:

Will appear on the console

See help for wsl commands with :

To turn off wsl :

To work from the windows file explorer or from any other windows application on the files within the wsl2 subsystem, we must first have the wsl2 subsystem started to avoid corruption problems if those files were accessed.

The way to start the wsl2 subsystem for the installation of the rest of Ubuntu programs is through the linux root user, for this we must execute, with administrator privileges, in any command console in windows (cmd, PowerShell preferably, windows terminal) and enter the following command:
Set as the default user for now and the following sessions:

From now on and later with the wsl.exe command it would also be the root user if that is what you want.

On the other hand, the Linux wsl2 subsystem can be accessed as root or any other user in the session that is opened with the following command:

The following times, if nothing is indicated, it will be with the user defined by default in the installation.

From that moment we can edit the same file in the Linux subsystem with:
In a Windows console:

In the Linux wsl2 console:

There may be a problem with the permissions defined in the wsl2 Linux Subsystem that do not allow access to users not logged into the system.

With WSL2, a much more comfortable development environment is created using the Windows tools for code editing and maintenance of the files involved and running on the Linux Ubuntu web server.

Obviously this is also achieved in windows development with other utilities that act as local web servers of type WAMP like xampp, Uniform Server Zero XIV, Local, etc ...

To access the files in the wsl2 UBUNTU distro from the WINDOWS 10 explorer:

The filesystem of the Ubuntu distro installed in wsl2 appears 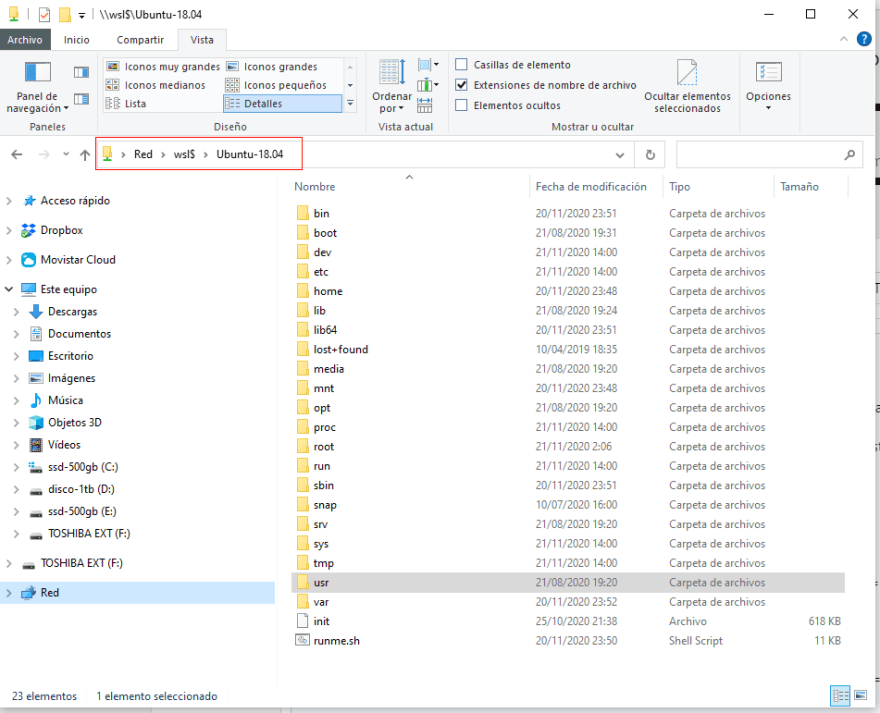 You can copy, delete and edit any file or folder in Ubuntu from Windows using Windows applications.

To access disks, folders and files in Windows from the Ubuntu prompt in WSL2

Once Ubuntu is installed in WSL2, it can be started from several places:

The Ubuntu window will open with the system prompt.

For the installation of the rest of the utilities and applications of the Ubuntu system, we are going to specify and concentrate all the basic and initially automatable in a single batch execution file that will be executable from the "prompt" of the system.

First you have to change to SuperUser mode to have the necessary permissions with the following command:

Enter the password "YYYYYYYY" of the user "XXXXXXXX" previously defined at the beginning of the Ubuntu installation.

Then change to the root directory of the system with the command:

Execute the command "cat" to create the file:

Add (copy and paste) the "command lines" that are below.

Make the file executable with:

When executing this installation file, you should pay attention to the messages that are displayed and answer some related questions.

After execution of the installation of Apache2 / PHP 8.0 / MySQL 8.0 / phpMyAdmin 5.0.4 the Local Web Server is finished, then enter the following instruction to exit SuperUser mode:

To set the priority of PHP files over HTML files on the Apache server:

Restart the Apache server for the changes to be recognized with:

Then to START the services manually every time wsl2 is started:

But it is more practical to make these instructions run automatically at startup to activate the services, therefore you have to edit the bashrc file:

When starting WSL these services are started asking for the SuperUser password since they are executed with permissions with the SUDO instruction.
Instructions when exiting the system at shutdown by editing the bash_logout file.

In the case that you want to access the Linux subsystem in a graphical environment, among many other solutions, is using the Windows 10 Remote Desktop, for which you have to execute ONE BY ONE (copy and paste in the terminal) the following instructions in the Ubuntu installation on WSL2:

Then edit the following file:

Search and find the following lines and put the symbol # at the beginning of the lines:

Add these lines to the end of the file:

Then Ctrl + O and Ctrl + X to save the changes and exit.

Then write, in the terminal, to initialize the following:

Then in Windows in the search field where it says "Type here to search" write Remote Desktop Connection and then click on the open option. 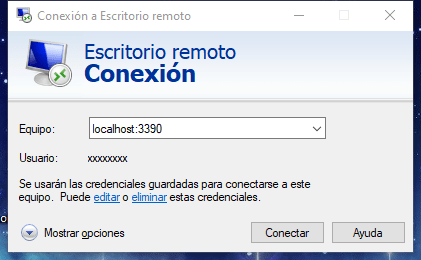 If you want to automate the remote desktop service startup at the same time when the system starts.

Add at the end the line:

Then Ctrl + O and Ctrl + X to save the changes and exit. 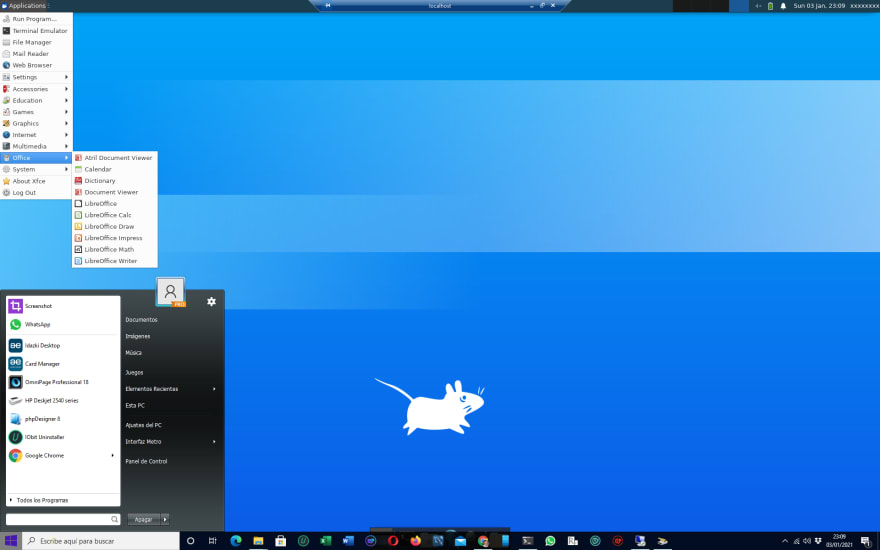 As a continuation of the procedure for installing a local web server in WSL 2, we will proceed to establish access from any device connected to the local area network, either by cable (PC / laptop) or by Wi-Fi (smartphone / tablet / laptop ) to this server.

Suppose that the host PC / laptop where the web server is installed in the WSL 2 subsystem is connected to the local area network through a Wi-Fi connection.
In a PowerShell or cmd console / terminal and through the ipconfig instruction we see that the IPv4 address of the host in the wireless network is 192.168.1.40

Once a PC / Laptop / Tablet / Smartphone connected to the same Wi-Fi network is able to "PING" with a positive response to this previous IP address, we will do the following.

In the Windows system of the "host" computer of the wsl2 subsystem, with a text editor must be created a text file "startup-server-web.ps1" in the directory of the computer you want, but preferably in C:\ with the following instructions (copy & paste):

From a PowerShell console/terminal opened in administrator mode, execute this file:

At this time the web server in WSL 2 can be accessed from a device on the same local área network with the instruction in the browser of the host's IP address: 192.168.1.40

If there is any error in this guide, please comment to be corrected