In this tutorial we aim to create a simple Node.js app with Express.js and containerize it with Docker then publish it to Docker Hub.

NOTE: This will be a practical tutorial so I will not be explaining any concepts such as Node.js, containerization or Docker. And I will also assume you already have node and docker installed on your machine. But if you want me to write an article explaining those concepts, let me know in the comments.

We will first create a simple Node js app that we will then work with. Follow these steps to create the app:

and cd into it

Fill out the information and set entry point to be src/app.js
the final package.json should be something like

3. Install the packages
We are going to need these packages:
express, cors and (as an optional dev dependency) nodemon
run:

5. Use nodemon to watch for changes (Optional)
Installing and using nodemon is optional and I've included it in the tutorial just as an example to simulate a real-life scenario.
In the scripts section in package.json add the dev script as follows:

and now in a terminal session you can run:

6. Write the code
Now we are going to write our actual application.
The goal is to make a simple web server that listens on port 8080 and have 2 endpoints:

So now in your favorite text editor edit the source code as follows:

The source code for src/app.js will be:

and for src/routes/home.js it will be:

7. Test the app
Now we are going to test if our code works or not.

You should see a web page as follows: 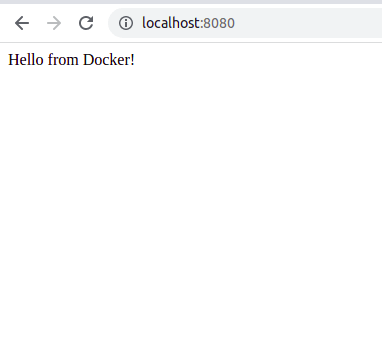 And if you go to http://localhost:8080/greetings/Ahmed you will see something like: 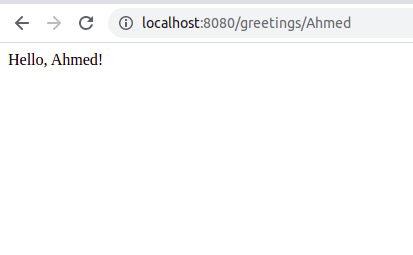 Congrats! Now the app is done and we can move to the docker stuff!

2. Containerize the App with Docker

1. Stop the running node app
First thing to avoid port conflicts later on, we need to stop the app for now, use Ctrl+C on the terminal session where you started your app.

2. Create a Dockerfile
In the root directory of the project create a file named Dockerfile, for example you can run:

3. Dockerfile code
In the Dockerfile you just created put the following code:

The Dockerfile is divided into steps, each line represents a step (lines starting with # are comments)
So I'll explain each line/step:

We select the base image to use for the custom image we want to create, here we are using the Official Node Image with the alpine tag which will basically import the Alpine Linux image with Node installed in it. I'm using Alpine image just because it is lightweight, but you can use any other image you like and you can specify what version of node you want, for example you can use:

We specify a directory -inside the container- to put our app inside of it, you can use anything you like.

This command will basically run npm install with the --production and --omit dev flags. You can use any other flags but this is what I personally use for production apps.

Step 5: Copy the source files to the working directory

Now we will copy out source code files to the working directory we specified on Step 2.

Step 6: Run the node app as the entry point of the image

This is the command that will be run when we spin up a container with our image and we just want to run node src/app.js.

So that's it, we are done with our Dockerfile.

2. Build the Docker image
Now we want to build the actual image that we will use to spin up containers of our app.
In the terminal run:

NOTE: You might need to run the docker commands with sudo if you haven't done the Docker Post-installation Steps

After the command is done you should see something like:

3. Get the Image ID
We will need the Image ID so we can use it since we didn't specify any tags for it. You can copy the ID from the above docker build output on your terminal or you can list all the images you have using:

Replace <IMAGE_ID> with the ID of your image.
The flag -d is used to run the container in Detached Mode(in the background).
The flag -p will expose a port from the container on the host machine. It uses the syntax -p hostPort:containerPort.
You can read more about these flags in the Docker Run Reference.

It means that you are up and running. If you go to http://localhost:8080 you should find the app running!

5. Stop the container
You can stop the currently running container using the command:

Replace <CONTAINER_ID> with the output of the previous step or run:

To get a list of the running containers and then copy the CONTAINER ID from the output.

Now we know our image is ready and we can publish it to a Container Registry to use it from anywhere we want!

3. Publish the Image to Docker Hub

Now we have completed developing our app and we built a Docker image of it, now we need a way to distribute/publish our image either publicly or privately.

Docker Hub is a Container Image Library or a Container Registry where people can push(publish) their images to repositories and make those repositories either public for anyone to view and pull(download) or private where only those authorized can view it or pull it to spin up containers.
We will be pushing our image to a public repository on Docker Hub where we can pull it and use it from anywhere.

1. Create a Docker Hub account
If you don't already have an account go to hub.docker.com and create an account.
Note that your username on Docker Hub will be your namespace for your repositories, for example mine is ahmedwadod so my images will be ahmedwadod/image_name:tag

Now fill out the details of your repository, we will be setting the visability to Public, if you set it to Private you are going to need to login with your credentials on Docker whenever you want to pull the image.

Now click Create and you will have your repository set to go.

3. Tagging the image
Now we need to rebuild our image with the appropriate tags, the tag for your image will be: YOUR_USERNAME/REPO_NAME:TAG for the :TAG we will use latest as it is the default. The :TAG can be used to when you want to upload different versions of your app for example it can be :v1.0 or :v2.0 or it can be used for different variants of the base image used, for example :v1.0-alpine or :v1.0-ubuntu.
In my case the tag will be: ahmedwadod/nodejs-docker-tutorial:latest

To build the image go to your project's root directory and in the terminal run:

4. Login to Docker Hub
Now to publish our image we need to first login into Docker Hub from the terminal, run:

Now if you go to the repository in Docker Hub and then to the tags tab you will find the tag latest available. 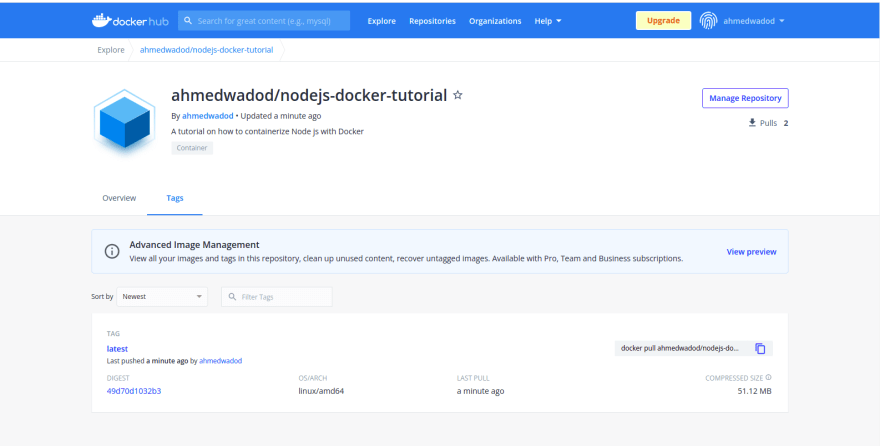 6. Run the image from anywhere!
Now you can go to any server with docker installed on it and run:

And it will spin up a container with your Node js App!

Now that you have containerized your app, you can deploy it. I will be posting in the future about deploying web apps with Dcoker, so follow me to stay tuned.

You can find this tutorial's code on my Github

If you have faced any problems with these steps, comment down below and I will try to help you fix it.

Ahmed A. Elkhalifa
A CTO and DevOps Engineer who also likes backend development and low-level programming.
Merging Pull Requests Like a Pro With Mergify
#programming #git #productivity #tutorial
How to style this up?
#swift #design #discuss #mobile
How to Handle Events in a Node.js Ecommerce Platform
#opensource #javascript #webdev #programming