“So will wasm replace Docker?” No, but imagine a future where Docker runs linux containers, windows containers and wasm containers side by side. Over time wasm might become the most popular container type.Docker will love them all equally, and run it all"

TLDR: Containers will remain relevant , however the WebAssembly revolution will take over behind the scenes impacting all the major frameworks and libraries, that are transitioning to webassembly modules. This is for both client and server applications. https://madewithwebassembly.com/ . WebAssembly IS Cloud Native and a distributed computing assassin.

5.WebAssembly facilitates the combination of software. Server + Client side. Allows for interop between all languages which compile to the WASM target.e.g. WebAssembly seamlessly supports server application frameworks, such as Node.js and Python. You can call python code from your nodejs application.

6.Part of kubernetes is being re-written in Rust, which highly complements WebAssembly.

7.Because of its small size, we can move compute to data, instead of pulling data into applications. Compute can now be funneled to the data , this reduces data duplication, data movement, and is more scalable as data sizes explode. See wasi-data ( https://github.com/singlestore-labs/wasi-data)

Streaming compute to data!
Think map reduce on steroids, and the impact that had on creating an entire "Big Data" industry.

If you enjoyed my post I'd really appreciate it if you could check out my new webapp WannaGo. Its meant for developers and designers to come together on a cross-skill platform with built in scheduling and instant WebRTC based peer-to-peer text, audio and video chat in the browser.

Collaboration app for devs, designers and people who just wanna study or watch movies together :p 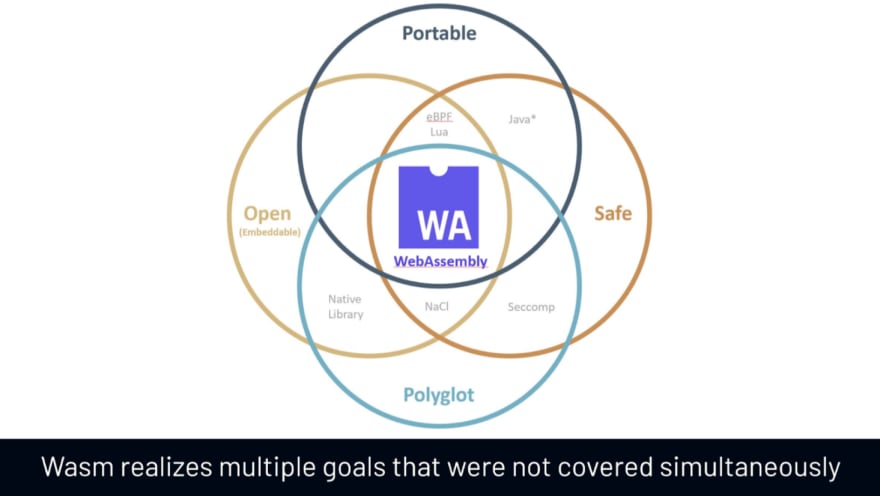 Once suspended, ahmad_butt_faa7e5cc876ea7 will not be able to comment or publish posts until their suspension is removed.

Once unsuspended, ahmad_butt_faa7e5cc876ea7 will be able to comment and publish posts again.

Once unpublished, all posts by ahmad_butt_faa7e5cc876ea7 will become hidden and only accessible to themselves.

If ahmad_butt_faa7e5cc876ea7 is not suspended, they can still re-publish their posts from their dashboard.

Once unpublished, this post will become invisible to the public and only accessible to Ahmad.

Thanks for keeping DEV Community safe. Here is what you can do to flag ahmad_butt_faa7e5cc876ea7:

Unflagging ahmad_butt_faa7e5cc876ea7 will restore default visibility to their posts.