1. From manual to automated tests

a. The organization of manual tests teams – V-cycle
For many years, software was mainly developed with a V-cycle methodology. As a reminder, the V-cycle is a project organization model that is characterized by a flow of activity that details the product until its realization and a flow that assembles the product by checking its quality. 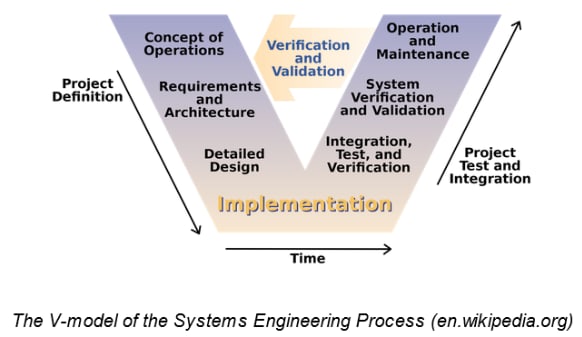 In this model, the further upstream the steps are, the later the validation of the step. This observation was made by experts who wanted to implement ‘Shift Left’, which is used to detect anomalies as early as possible, by implementing processes such as reviews. As a reminder, reviews are processes for verifying written deliverables that can be adapted to a wide range of subjects such as code, specifications, scripted tests…

In addition to late testing, the V-Cycle offers other problems. The delivery cycles are long and thus limit the number of deliveries per year (often between one and four). The specific test ‘phases’ also take place in a very punctual manner. Another issue arises with SUTs (System Under Test) that have many changes to test, with many requirements, leading to test campaigns that can last several weeks.

This V-cycle method gives the advantage to manual testing. Testing teams working in V-cycle spend a lot of time preparing a campaign with design and test writing phases. After that, the testing campaign can begin, after the software has been delivered. As this test campaign can be long, a follow-up is regularly set up to have intermediate assessments. At the end of the campaign, the test team moves on to another topic, such as preparing a new campaign for a different SUT.

The test loads on a particular SUT are therefore not at all smoothed out with the V-cycle method. However, a good understanding of the business, the ability to understand the specifications and to design the tests are a must. In V-Cycle, there is much less room for error compared to the Agile method, where a new version can be delivered very quickly.

This methodology has trained testers to be highly skilled in the art of understanding the business, implementing strategies around RBT (Risk Based Testing) and designing quality tests. Testers who are used to the V-cycle have not generally been asked to work on test automation. Indeed, there are few campaigns that are regularly enough executed to be considered repetitive and require automation.

b. Challenges faced by manual tests
Download and read this book for free here.

Once suspended, agilitest will not be able to comment or publish posts until their suspension is removed.

Once unsuspended, agilitest will be able to comment and publish posts again.

Once unpublished, all posts by agilitest will become hidden and only accessible to themselves.

If agilitest is not suspended, they can still re-publish their posts from their dashboard.

Thanks for keeping DEV Community 👩‍💻👨‍💻 safe. Here is what you can do to flag agilitest:

Unflagging agilitest will restore default visibility to their posts.