We have released “Dev” tokens in order to support the sustainability of Open
Source Software (OSS).

“Dev” works to achieve fair monetization of your OSS.

Neither commission fees nor usage fees are required.

Utilizing the token economy allows developers to concentrate on development, and
investors to effectively support any OSS.

For the most part, OSS are provided free of charge. OSS developers maintain
their OSS projects by securing a revenue source separate from their OSS.

Typical sources of revenue are as follows.

Since [1] and [2] are not revenue produced by the OSS itself, the OSS is only
allocated a limited amount of their disposable time.

The revenue of [3] tends to be an amount that deviates from the value of their
OSS due to the arbitrary model of high evaluations. OSS developers are required
to focus their efforts on fields other than just technology so that they can
continue to raise their evaluations.

[4] and [5] essentially achieve monetization directly from the OSS, but this can
be done only with a few limited large-scale projects.

“Dev” works to realizes revenue proportional to the real value of the OSS. In
addition, it does not require changes to the OSS itself. With this
loosely-coupled system, we evaluate the OSS with simple and powerful evaluation
logic and actualize monetization according to that evaluation.

To begin, it can be depicted in a simple diagram. 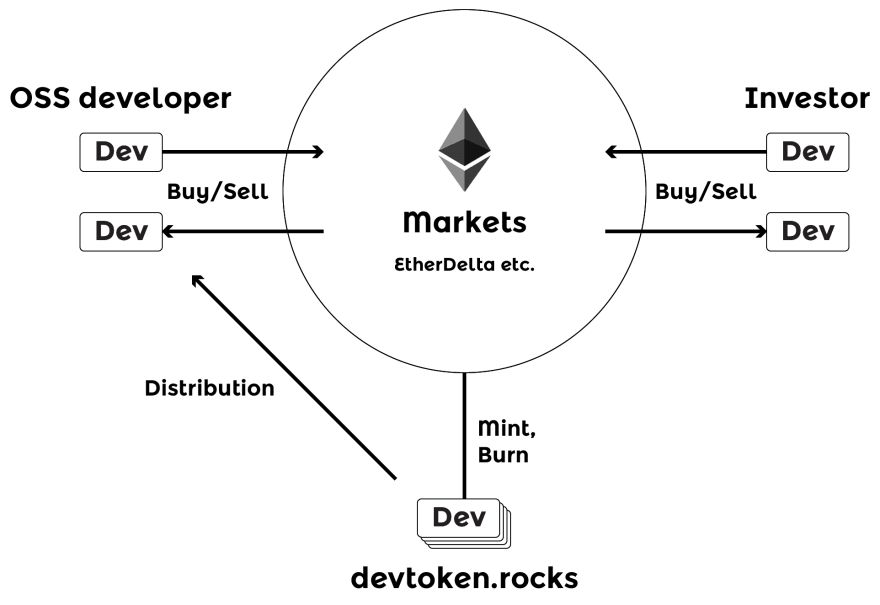 “Dev” is created based on the ecosystem of Ethereum. It is easy to understand if
one has an understanding of block chains, but it doesn’t matter even if they
don’t.

“Dev” can be traded on the market like Ethereum or Bitcoin. Since “Dev” conforms
to the Ethereum standard (ERC20), the price of 1 DEV is determined by the rate
between 1 DEV and 1 ETH.

The outline is as follows.

As “Dev” is a token that continues to mint, there is a mechanism to suppress the
dilution of the value of “Dev” itself. This involves evaluation logic.

The following variables are used in calculations to determine allocation to the
OSS:

The calculation formula is as follows.

The per-diem rate of “Dev” tokens retained by that OSS is added to the number of
OSS downloads. The same equation is calculated for each OSS individually and all
OSS total, and the ratio is determined for each OSS.

The number of allocations is determined by multiplying the monthly number of
mints by that percentage.

The number of tokens retained by the OSS are added to suppress dilution of the
value of “Dev.”

The more tokens possessed by an OSS, the more tokens will be allocated each
month. In other words, you can increase the number of shares by purchasing or
saving tokens. This will prevent tokens from being sold all at once and suddenly
diluting the value. Investors don’t want the value of the token to be diluted.

As an application of this mechanism, if you send “Dev” tokens to the OSS you
want to support, you can increase the number of token allocations to that OSS.

The calculation logic is available for viewing on GitHub
(frame00/dev-distribution).

Future plans to distribute to contributors

“Dev” is currently in alpha. Tokens are distributed to the owner of the OSS.

We want to implement the ability to distribute tokens to OSS contributors.
Contributors would be able to receive compensation relative to their
contribution.

With active use of “Dev,” we would be able to proceed to advance functional
development as soon as possible.

How to connect with “Dev”

There are a number of ways to get involved in the OSS community for “Dev”.

I want to monetize my OSS

If you are self-publishing your OSS, you can begin to achieve monetization by
registering your OSS on devtoken.rocks.

Registration is quick and easy, and there is no need to make any changes to your
OSS.

As it is currently in alpha, only OSS that are published in npm can be
registered.

I want to support OSS

You can contribute to an OSS by using “Dev” tokens.

“Dev” can be contribute efficiently in order to realize a world where OSS are
more actively developed.

Order Book can be opened from devtoken.rocks to buy
and sell “Dev.” EtherDelta is used for main exchanges.

There is an OSS that I want to directly support

If the OSS that you want to support is registered in “Dev,” you can send “Dev”
directly to the wallet address of the OSS.

If the number of tokens retained by the OSS increases, it increases the amount
of monthly distributions made to that OSS. In this way, you can provide
continuous support even without making a new contribution every month.

Refer to GitHub
(frame00/dev-distribution) to
check the wallet address of the OSS. OSS information is stored in
config/packages.ts.

Growth of “Dev” is accelerated through active use by OSS developers and
investors.

This article was originally posted on Medium.

NPM is good friend of every web-developer in JavaScript community

Why you should host public npm packages in a private registry