In this post I've put together some of the naming conventions, rules, and ideas that I tend to follow when creating database schemas to work with. This also applies to schema-less databases, distributed systems databases, graph, time series, or whatever else I am working with. It's always good to have some good conventions to work with, and the descriptions and ideas in this post are a solid starting point.

What We're Working With, Some of The Database Rules

Let's start with a SQL Server rule. Table names must be less than 128 characters. To force SQL Server to use non-standard table names one can use brackets. Then in scripts these names have to be single quoted.

There are many other rules about naming things in SQL Server. But let's talk about some other database specific rules for other databases.

SQL identifiers in Postgres and key words must begin with letters (a-z), which include diacritical marks and non-Latin letters. After the first letter and identifier can have letters, underscores, digits, or dollar signs. If an identifier is double quoted, you can also yse keywords, albeit I would very strongly reccommend against this practice.

As these examples provide, there are a number of ways that the rules are just different enough from one database to another that it is often very helpful to use a naming convention that would work across databases. I'm often working with a variety of databases so this post will cover naming convention ideas and respective patterns and practices around them that would work with every conceivable database I know to exist!

In many databases there are additional organizational and related structures that help us to setup tables, functions, stored procedures, compiled SQL/queries, and other objects in groupings. Naming these objects accordingly is easiest by following the same convention as the table naming convention.

For example, if the table naming convention is following Camel Case then continue that;

Table Names for Returns in an E-commerce Domain:

Table Names for Pricing in an E-commerce Domain:

Table Names for Core Tables, for multiple schemas, within the E-commerce Domain:

This could be split out to three schemas;

Here's an example I put together with some naming conventions I've found useful, reduces confusion, and manages to tell a reasonable amount of information about the domain space and schema of the database without conflicts. 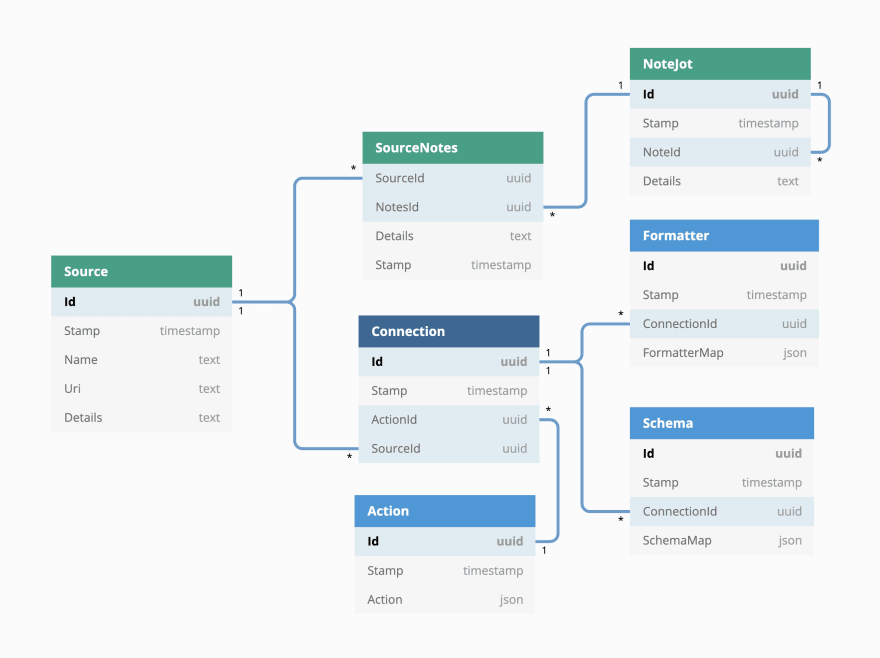 Throughout this schema I've used Camel Casing, with most single word column and single word table names. Keeping it simple, such as Id and Stamp are some of the recurring columsn that are useful for retrieval, relationships, and determining origins of data over time. In production settings there are default columns that are often needed and one can rest assured, a time stamp is most likely one of those that is needed everywhere for audits!

For my foriegn key columns, one can determine the relationship by the name of the column itself. For example, in the Connection table the are two foreign keys, one to the Action table and one to the Source table, to the respective Id columns in each of those tables. The one exception is NoteJot, which I named because Note tends to conflict in certain systems. In that table I've added a relationship, for recursive data, back to itself with the use of the NoteId foreign key back to the table's primary key Id.

The diagram above, without any further details can be used to create the schema, with SQL code that would look like the following.

We have the tables and keys, all following the Camel Case standard. Much of this however could be - if you preferred - to Pascal Case however switching them to Snake or Kebab Case would cause a number of issues depending on the database.

Do NOT Use These

Unless you want to spend tons of time with errors, debugging, and related issues skip these practices.

Working up a set of patterns, practices, rules, and generally conventions to work with on the database side of things is immensely useful. It helps the Database Administrators, Data Scientists, Software Developers, others that need to utilize the database, and to communicate with each other in reference to the database and data.

That's it for now. However, if you're interested in joining me for more database and data oriented things, language stack setup, software development, patterns, practices, and more in addition to writing some JavaScript, Go, Python, Terraform, and infrastructure, web dev, and all sorts of coding I stream regularly on Twitch at https://twitch.tv/thrashingcode, post the VOD's to YouTube along with entirely new tech and metal content at https://youtube.com/ThrashingCode. Feel free to check out a coding session, ask questions, interject, or just come and enjoy the tunes!

For more blogging, I write at https://compositecode.blog and the Thrashing Code Newsletter for more details about open source projects and related efforts I work on, sign up for it here!

Web Scraping with Xpath and Python

Build on Flow | Learn FCL - 14. How to Mutate Chain State by Signing Transactions with a Private Key

Thanks for keeping DEV Community safe. Here is what you can do to flag adron: