Hi community!
This is my first post in DEV and I'm excited about telling you about myself.
In the time I'm writing this post I think I have no followers (for sure) but hope someone sees my post someday and I would have some comments under it.
Anyways let's get started!

Who am I and how did I become a programmer?

My name is Adnan Babakan, I'm 19 and I'm from Iran (a country in middle east) and my city is called Tabriz.

Living in Iran might sound strange but it isn't anything close to what you hear from the news outside especially news from the USA channels like CNN. Are there problems? Yes a lot but not as you might think. I play a lot of games especially online games like Overwatch and Rainbow Six Siege and I encounter lots of people from around the world speaking thousands of languages but fortunately I can speak English and sometimes they also can and most frequently asked question is that aren't you scared? My immediate answer is what the frick? What should I be scared of? And the response to that is WAR!!!! Let's clear this for ever there is no war in Iran, absolutely no war. Actually Iran is a pretty safe country.

Anyways, I'm a computer engineering student in the University of Tabriz and sometimes it feels really bad, why? because everything they are trying to teach me in the programming subject I already know them since I'm a self-taughtt programmer and I feel board in the class but anyways I have to pass these classes anyways (I know I used anyways a lot, but anyways).

It was awesome to learn these brothers but I needed more and that more happened to be PHP for my first real programming language.

An advice: Do not learn PHP as your first programming language since you are going to struggle learning others due to PHP's spaghetti problem. 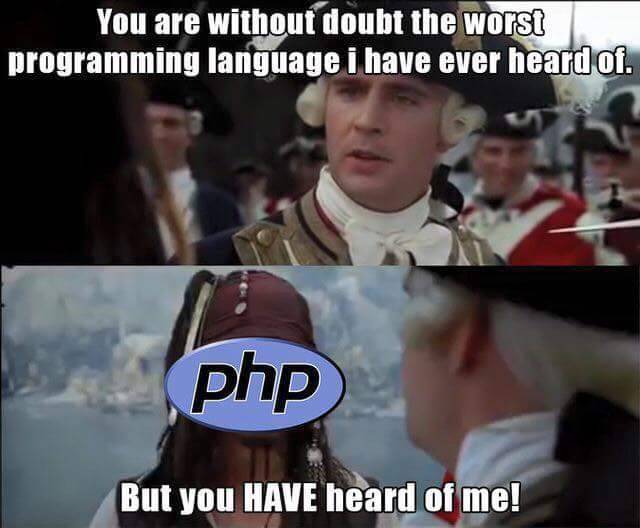 I'm a PHP programmer myself so don't get mad at me and let's accept other programming languages like JavaScript and Python are way better organized than PHP.

These three languages were my mates for a year or two then I started to get the feel that I need JavaScript. I hated it by then but I had to learn it, there was no other languages for client side so this was me:

So that's why I told you never start programming by PHP. After these scenarios I started learning jQuery on CodeCademy.com. I assure you jQuery was one of the best ways of starting to learn JavaScript by then.

After learning jQuery I was almost shocked by the power JavaScript has then started to learn Vanilla JavaScript (a fancy name which is given to plain JavaScript with no libraries included in case you didn't know it) and after few years that I was writing simple programs I got introduced to Node.JS and that was the beginning of a great journey to a big community that is absolutely lovely.

Oh, I forgot about SQL. SQL is the thing I loved the most after JavaScript. SQL is awesome and there is no doubt about it and if you want to be a Full-Stack developer you must learn it and never listen to those who say "YOU DON'T NEED SQL YOU WILL USE FRAMEWORKS AND THEY HAVE ORMS". You will absolutely need SQL even in a higher level program.

After learning the syntax of these languages and after learning that every language is worth trying at least one I started working on Python and Ruby for a few weeks and I can tell you that these languages are awesome but unfortunately never had the chance to really work on these since I am very comfortable with JavaScript and never dared to bring my main projects on these two and that's absolutely my problem and not these guys'.

What do I do for living?

I'm student at university but I make web apps a lot and that's how I make some money nothing more.

What about other hobbies?

OK this is a very interesting question. Let's say since I'm a computer guy I love almost everything that is distributed digitally (LOL) especially video games, movies and musics. What kind of music do I listen to? Every kind that makes me feel better in any way.

Except for these I love learning, and learning languages on top of all of them. Languages can be both programming languages and human languages.

I know almost 5 languages and don't think I will ever cease to continue.

Let's start by my mother tongue. Although Iran's official language is Persian (AKA Farsi) but the city I'm living in is the main place of a language called Turki which is almost like Turkish from the country Turkey.

This is how it looks with Persian script: سلام نجورسوز؟ And this is the romanized one: Salam, Najursuz? Which means: Hi, How are you (plural)?

My romanization isn't standard actually but you can read it at least.

It might sound strange but it actually makes sense believe me.

Let me introduce Persian/Farsi to you. So the first question might come in your mind is that why does this language have two names? The answer is that it is actually called Farsi or Parsi (These are almost the same and there are lots of talks about which is the main one) but English language calls it Persian.

So these two are the languages I learnt as soon as I was born, OK not as soon as that but pretty quickly.

My sister used to watch a lot of Turkish series and since it is close to my mother tongue I adopted it pretty quickly. An example of course is: Merhaba, bu benim ilk gönderim. Which doesn't need romanization but the meaning is: Hi, This is my first post.

Then I started to learn English when I was 12 or something and after a few years I was able to listen, speak, write and read and do what I need in English.

These are the 4 languages I know and the 5th one is actually pretty cool and I love it so much which is Spanish or Español. How I learnt it? By using Duolingo.

You can translate that yourself by using Google Translate or something.

So that's me.
Let me know if there are any questions regarding my path or anything else I would be happy answer all of them.