First lets talk about both in brief -
Components let you split the UI into independent, reusable pieces, and think about each piece in isolation.
Props are like function arguments, and we send them into the component as attributes.
Technically,Components are like javascript functions.They accept arbitrary inputs (called "props") and return React elements describing what should appear on the screen.
The simplest way to define a component is to write a JS function :

We can also use an ES6 Class to define a component:

The above two components are equivalent from react's point of view.

BUT with newer versions of React, now we can add state even in functional components by using "React Hooks".

for example, this code renders "Hello Aditya" on the page : 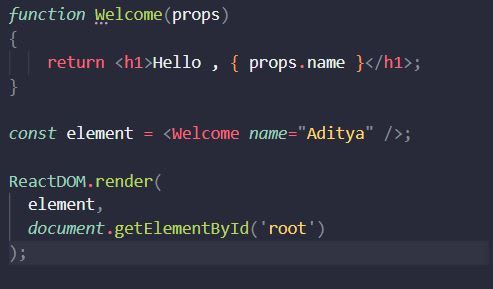 To conclude there are two things to remember which are :

TypeScript Utility Types: The 6 Most Useful

Once suspended, adityasharan01 will not be able to comment or publish posts until their suspension is removed.

Once unsuspended, adityasharan01 will be able to comment and publish posts again.

Once unpublished, all posts by adityasharan01 will become hidden and only accessible to themselves.

If adityasharan01 is not suspended, they can still re-publish their posts from their dashboard.