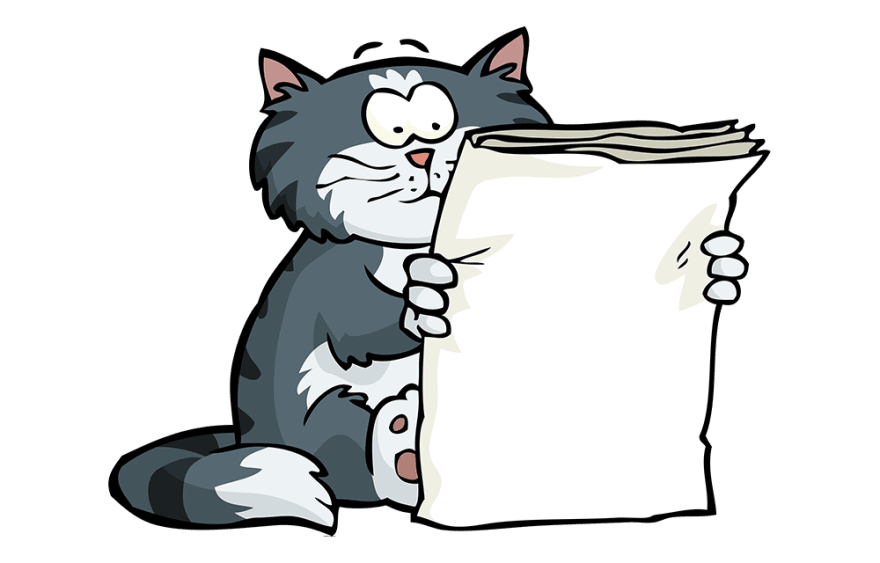 This is part 1 & part 2 of the full guide on React re-renders. The guide explains what are re-renders, what is necessary and unnecessary re-render, what can trigger a React component re-render.

The full guide also includes the most important patterns that can help prevent re-renders and a few anti-patterns that lead to unnecessary re-renders and poor performance as a result. Every pattern and antipattern is accompanied by visual aid and working code example.

What is re-render in React?

When talking about React performance, there are two major stages that we need to care about:

Re-render happens when React needs to update the app with some new data. Usually, this happens as a result of a user interacting with the app or some external data coming through via an asynchronous request or some subscription model.

Non-interactive apps that don’t have any asynchronous data updates will never re-render, and therefore don’t need to care about re-renders performance optimization.

🧐 What is a necessary and unnecessary re-render?

Unnecessary re-render - re-render of a component that is propagated through the app via different re-renders mechanisms due to either mistake or inefficient app architecture. For example, if a user types in an input field, and the entire page re-renders on every keystroke, the page has been re-rendered unnecessarily.

Unnecessary re-renders by themselves are not a problem: React is very fast and usually able to deal with them without users noticing anything.

However, if re-renders happen too often and/or on very heavy components, this could lead to user experience appearing “laggy”, visible delays on every interaction, or even the app becoming completely unresponsive.

When React component re-renders itself?

There are four reasons why a component would re-render itself: state changes, parent (or children) re-renders, context changes, and hooks changes. There is also a big myth: that re-renders happen when the component’s props change. By itself, it’s not true (see the explanation below).

When a component’s state changes, it will re-render itself. Usually, it happens either in a callback or in useEffect hook.

State changes are the “root” source of all re-renders. 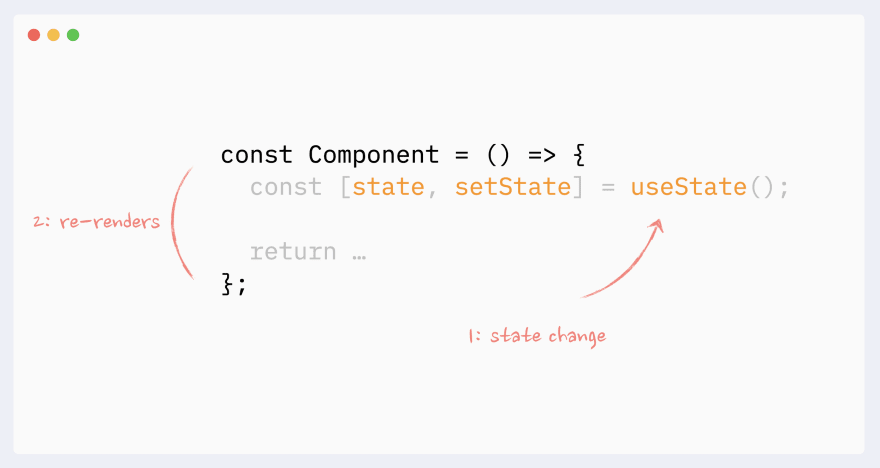 It always goes “down” the tree: the re-render of a child doesn’t trigger the re-render of a parent. (There are a few caveats and edge cases here, see the full guide for more details: The mystery of React Element, children, parents and re-renders). 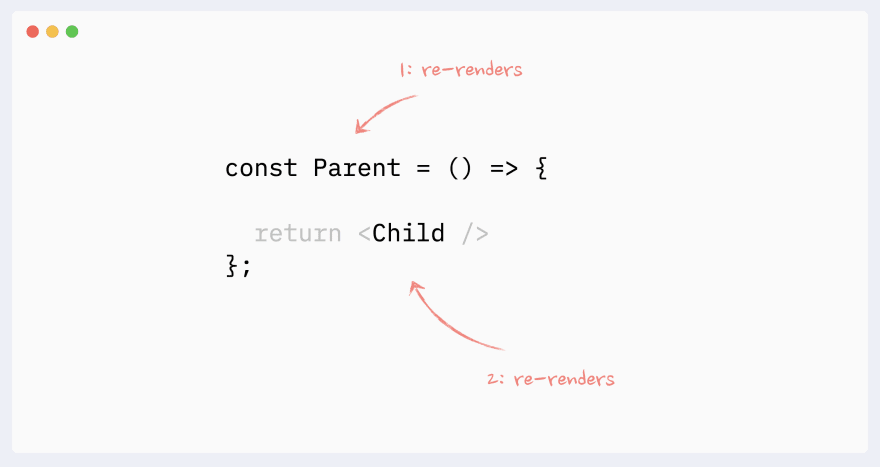 When the value in Context Provider changes, all components that use this Context will re-render, even if they don’t use the changed portion of the data directly. Those re-renders can not be prevented with memoization directly, but there are a few workarounds that can simulate it (see Part 7: preventing re-renders caused by Context). 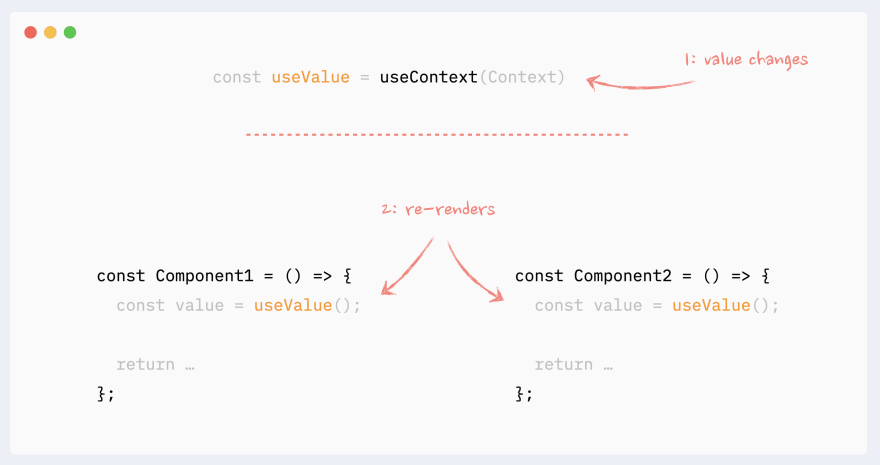 Everything that is happening inside a hook “belongs” to the component that uses it. The same rules regarding Context and State changes apply here:

Hooks can be chained. Every single hook inside the chain still “belongs” to the “host” component, and the same rules apply to any of them. 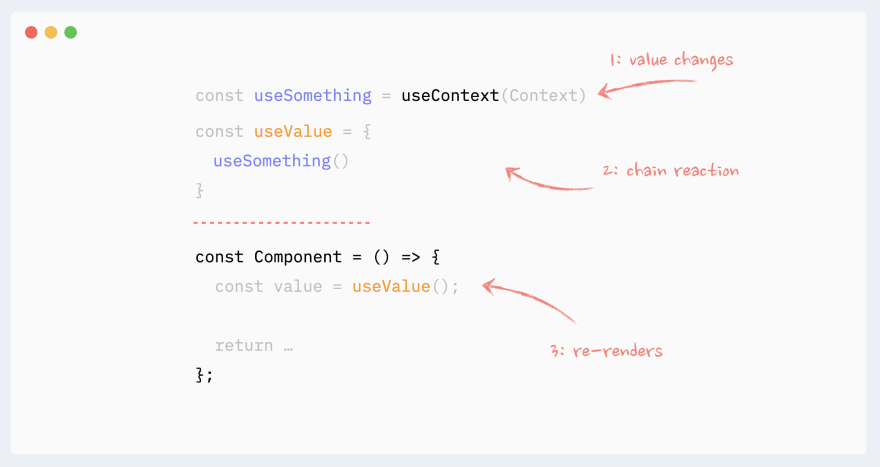 It doesn’t matter whether the component’s props change or not when talking about re-renders of not memoized components.

In order for props to change, they need to be updated by the parent component. This means the parent would have to re-render, which will trigger re-render of the child component regardless of its props.

Only when memoization techniques are used (React.memo, useMemo), then props change becomes important. 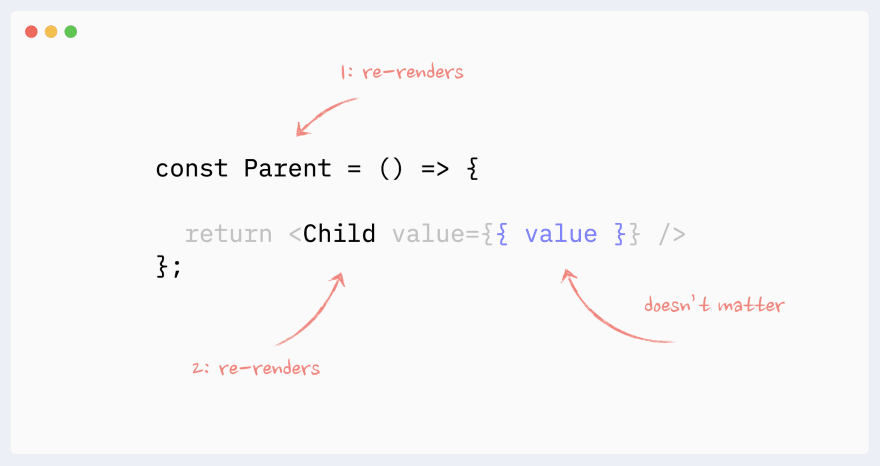 See the rest of the guide here:

In One minute : Node.JS

Thanks for keeping DEV Community 👩‍💻👨‍💻 safe. Here is what you can do to flag adevnadia: