Before the arrival of the Redux Toolkit (initially named Redux Starter Kit) in October 2019, fetching data asynchronously from the backend via Redux is always too much of a hassle. Developers had to settle with the Redux Thunk middleware package to handle asynchronous logic, which involves quite some amount of boilerplate code to be set up and some installation of packages to be made before executing the async logic.

Redux Thunk middleware is a function that intercepts actions dispatched from the system, triggered by users’ actions on the interface like clicking a post button, and checks if the action is a function, if so it calls that function by returning it. The function, in this case, is an asynchronous function returning a promise, once the promise is resolved or rejected as the case may be, an appropriate action creator will be dispatched to the reducer which ultimately conveys a response back to the component the action was initially executed on. 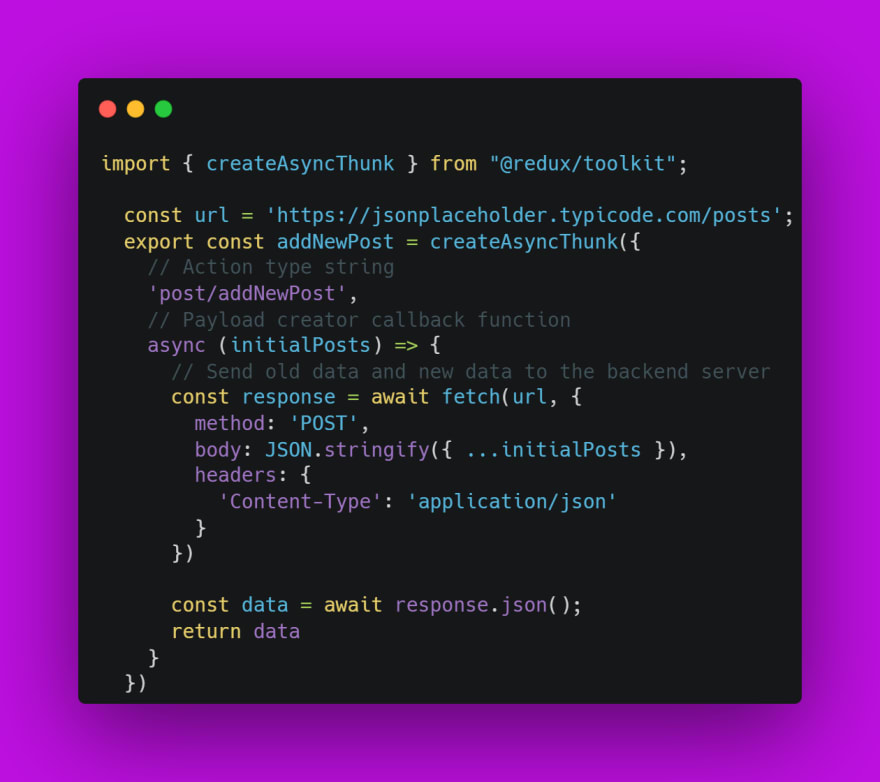 The code syntax above is a perfect example of how the Redux Thunk middleware can be implemented. addPost function is an asynchronous action creator which serves as the middleware that returns the action function by intercepting the ADD_POST action from the frontend and subsequently executes a fetch post request to the backend, and then ultimately dispatches (with the dispatch method) the action type and payload from the form controls on the frontend to the reducer to execute the appropriate logic for adding a post to the view. This is just a concise way of using the Redux Thunk middleware to give you an idea of how it works. But the configuration flow is whole another process in and of itself.

The configuration process of the Redux Thunk middleware is mostly unnecessarily complex and time-consuming, the time used to properly configure this library can be better used on writing the async logic.

This is where createAsyncThunk API (Application Programming Interface) comes in to save the day by saving you time and energy. This powerful API abstracts away most of the unnecessary parts of the Redux Thunk middleware for better developer productivity. createAsyncThunk API accepts two arguments: an action type string and a payload creator callback function. The action type string argument generates corresponding action types for the Promise lifecycle; pending, fulfilled, and rejected. The payload creator callback function handles the asynchronous responses and requests to and from the backend and ultimately returns a Promise, the kind of Promise depends on its lifecycle status: pending, fulfilled or rejected.

To further solidify our understanding of the createAsync API, we will be building a lightweight web application that can create and read posts.

Create a file named: postsSlice.js (this is where most of the Redux logic will live). postsSlice.js will contain a slice of state for the posts data coming from the API. This file also gives access to the reducer that will be added to the store and the actions we will need to dispatch on any user action (clicking the Post button to add a post).

From the contents of the postSlice.js file above, you can see a lot is going on there, so I will break it down in detailed steps (also pay attention to the comments above each line of code).

In any web application that handles state management with Redux, without the Redux store there is nothing that can be achieved with Redux. It is the same as building an application without using Redux. The Redux store is what ties in everything together and it’s from the store that the UI can pull data via the reducers.

Updating the state through the application happens in the store after an action has been dispatched to the store, the reducer(s) inside can decide how to update data either by adding data to or removing it from the store based on the logic contained in the reducer function.

We can see from the logic above, to create the Redux store, that it is the configureStore API imported from the Redux Toolkit that is bringing everything together. The reducer we exported from postsSlice.js is now imported and renamed as postsReducer. One of the great things about the configureStore API is that it automatically passes more than one reducer to the combineReducers utility behind the scenes. This utility was initially used to bring together two or more reducers before the arrival of the Redux Toolkit. This is one of the ways the Redux Toolkit help make the code much cleaner.

The posts: postsReducer object communicates to the application globally that the data/state coming in from and added to the backend will be consumed as state.posts on the frontend.

Consuming State/Data on the Frontend

Implementing the data/state coming from the store we will need to import a couple of packages. The useSelector hook aid in selecting the specific data/state we need from the store instead of pulling everything including the ones we don’t need. This ensures our application is unnecessarily bloated affecting performance as a result. useDispatch hook helps with dispatching actions (based on users’ actions on the UI) to the store for the reducer function to handle.

Before the arrival of the useSelector and useDispatch hooks in 2019, the connect() method was used instead to wrap components that need the state/data coming from the Redux store. mapStateToProps and mapDispatchToProps functions were initially fulfilling the functions of useSelector and useDispatch respectively. To drastically reduce the boilerplate code used to connect a component to the Redux store, React-Redux released these hooks to improve developers’ experience.

useEffect hook is used to handle the side effects as a result of the asynchronous actions dispatched to the store and the Promise returned. We declare a condition to make sure no data fetch is happening before we dispatch the getPosts action to the store, where the reducer function deals with the fetch request coming in by going through the Promise lifecycles (pending/fulfilled/rejected) and rendering the appropriate logic for each lifecycle. After the fetch request is resolved or rejected, we clean up our code cancelling any asynchronous tasks before the component unmounts. This prevents any sort of memory leaks.

Line 30 — 51 in the code above a conditional statement is created to properly handle the actions from Promise lifecycles. When the status state is pending (the data is being fetched) then a loader is shown to the user, then when the data finish loading and it is successfully fetched, the posts are displayed in UI in a reverse chronological order to ensure any newly created post is displayed first on the page. However, if the data was unable to be fetched, then the error message returned by thunkAPI.rejectWithValue() in the reducer function should be displayed instead which is something like “Cannot read properties of undefined (reading ‘rejectWithValue’)”.

We go ahead to import the needed packages to handle dispatch, navigation and local state management. You might be wondering why the useState hook is been used here in this component. Well, the reason is that updating the change of value in HTML form inputs is a local state that is only needed inside the CreatePost component and nowhere else.

The handleAddPost function deals with what happens when the Post button has been clicked for submission to the backend.

First, we check if the post can be saved based on whether any of the input is empty or not and if the status is idle, then the title and the body content from the input field is added to a post variable as an object.

Afterwards, the addPosts method imported from the postSlice.js file earlier is dispatched as an action to the Redux store along with the post object carrying the title and body content from the form as a payload to be added to the backend.

When all this is done the title and body input field is cleared by setting the state back to an empty string and the useNavigate hook is used to take the user to the home page displaying all the posts.

Subsequently, we handle any possible error that might come up and set the request status back to its initial state, idle.

A new post has been added to the backend and sent back from the store to be displayed on the UI. Although the newly added post will disappear from UI when the page is reloaded, this lack of persistence of data is because the data was not added to an actual database on the backend.

Redux Toolkit being an improved extension of the Redux state management has made life super easy for developers. The createAsyncThunk API helps you save a lot of time that would otherwise have been wasted in configuring so many boilerplate codes to handle asynchronous requests. That saved time can be better invested in writing code that truly matters. Please let this post be the little nudge you need to start using Redux Toolkit. Trust me you never regret it.

PS: You can find the complete code here: https://github.com/Kola92/redux-toolkit-tutorial

Once suspended, adekolaolawale will not be able to comment or publish posts until their suspension is removed.

Once unsuspended, adekolaolawale will be able to comment and publish posts again.

Once unpublished, all posts by adekolaolawale will become hidden and only accessible to themselves.

If adekolaolawale is not suspended, they can still re-publish their posts from their dashboard.

Once unpublished, this post will become invisible to the public and only accessible to Adekola Olawale.

Thanks for keeping DEV Community 👩‍💻👨‍💻 safe. Here is what you can do to flag adekolaolawale:

Unflagging adekolaolawale will restore default visibility to their posts.