This article was written by Stuart Squibb. He is a frequent contributor to the Adam the Automator (ATA) blog. If you'd like to read more from this author, check out his ATA author page. Be sure to also check out more how-to posts on cloud computing, system administration, IT, and DevOps on adamtheautomator.com!

If you've worked with LDAP (Lightweight Directory Access Protocol) before, you've probably run across LDIF files. LDIF is a schema defined in text files that defines LDAP directory content as a set of records. LDIF files define one record for each object (or entry) and store actions to perform on those objects like adding, modifying, removing and renaming objects.

In this article, you'll get a deeper understanding of what the LDIF format is, what a file looks like and how it's used by various tools.

The LDIF format is always represented in plain-text files with an LDF extension. Because they are plain-text,  you can easily view them in your favorite text editor. Visual Studio Code, for example, has a syntax highlighter extension for LDIF files that you can install which will make working with LDIF files easier. 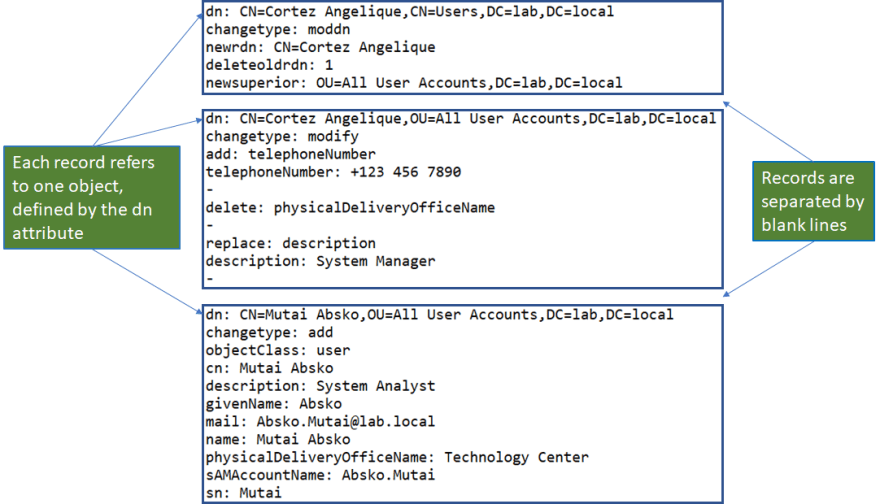 Each line of a record can contains:

Each record correlates to an AD object. Each AD object that the record refers to is identified by the first line of the record, which contains the distinguished name (DN) attribute for the LDAP object.

In the next screenshot, you will see a snippet of an LDIF file generated for a user LDAP object type. This file was exported with the LDIFDE tool representing a user account for Paul Cox.

Each line of the example file below represents one of the attributes for Paul, apart from the comment line.

You'll see that this record has two multi-valued LDAP/Active Directory attributes such as objectClass and memberOf. These attributes are represented by multiple lines - one for each value. Also note that the objectGUID attribute is base64 encoded. Attributes are encoded in the LDIF file because that particular attribute is not stored in LDAP as a plain text or numeric value. Instead, it is stored as a 16-byte binary value.

Since this example file was exported with the ldifde tool, it is ready to be re-imported elsewhere so it has a changetype of add. 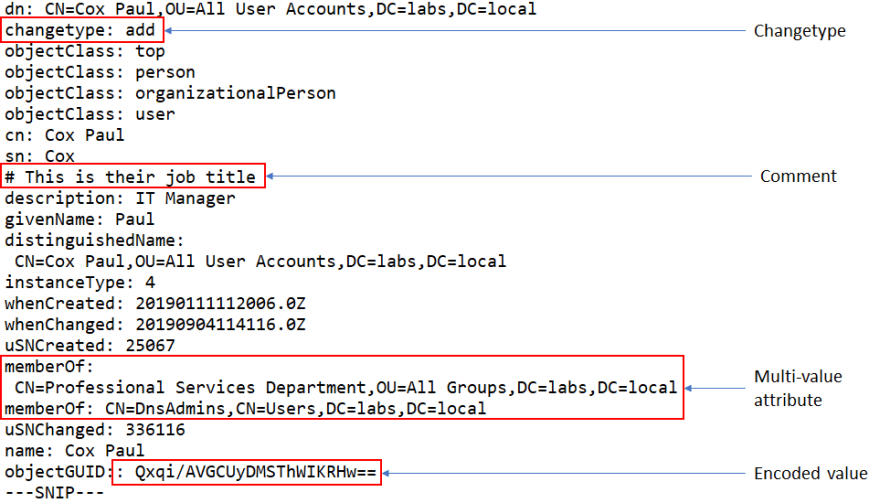 As mentioned earlier, one tool you can work with LDIF files is called ldifde in Windows but others exist as well. LDIF files can be generated and consumed by a variety of tools such the OpenLDAP tools available on Linux and Mac OS, the python module python-ldap and the perl Net::LDAP::LDIF module.

Adam the Automator
20+ year veteran of IT, experienced online business professional, consultant, Microsoft MVP, blogger, trainer, author and content marketing writer for multiple technology sites
The M1 Mac - Is it worth it for devs?
#systems #node #codenewbie #discuss
The Importance of Having a Personal Website
#webdev #discuss #codenewbie #javascript
So, how many of you respect CSS as a programming language?
#webdev #css #discuss