TLDR; This post is about Swagger and how it improves the communication from the two sides of the coin via a contract. Thoughts? Jump in the story 🤓. 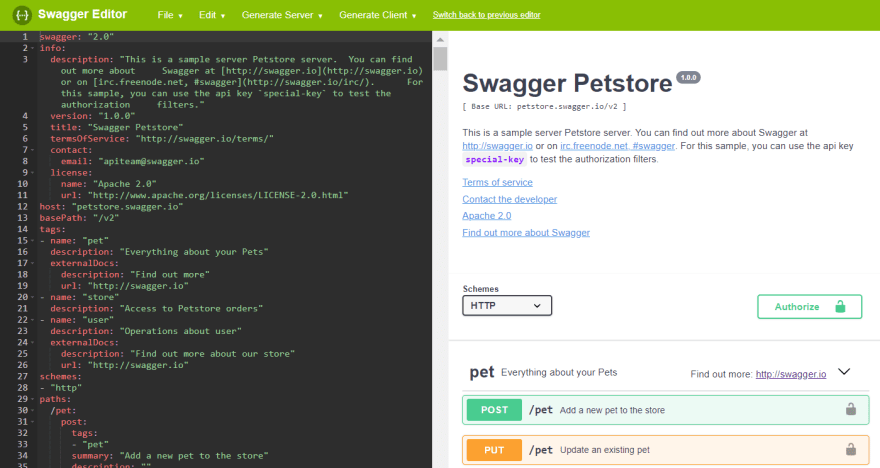 I will share with you some stories about use cases I have had along my career as a Software Engineer.

All in the FE side:

Miscommunication and lack of documentation

3 years ago my team was defining a new API to display some data, I (FE) got some requirements to display the data; and the BE got some requirements to manipulate the data, we jumped on a call and briefly defined the Data Structure for the response and request, everything was fine by then. Suddenly there comes the inevitable: requirement change. The requirement change was in the BE layer (wasn't communicated nor re-evaluated), so I proceeded and finished the FE as agreed on the first call. The issue was that we didn't have a documentation guide to describe the API definition and we ended up with a puzzle that couldn't be easily solved.

At the end we managed to glue the API to the desired behavior but this could have been prevented with a good workflow. ;)

2+ years ago I gave it a try to use Firebase DB, what's the advantage? You don't need to define APIs, you consume APIs based on your Document Objects, you need a user object? You just create it, you need a pet object you just create it. For this case it was easy because the data was created from the FE on demand and consumed on demand. Cheers mate!

Jumping to the other side

1+ year ago I started working as a Full Stack Engineer, having to create my own APIs to be consumed by me and other members in the team, good thing is now I can change and manipulate the API in the way that I need it from the FE layer as well as in the BE layer, however there was still a gap, a piece in the story that made the APIs complex, there were some APIs in the existing code base and they lacked of documentation, that's when I remembered that 3 years ago I had a similar problem and someone mentioned Swagger.

There it comes the happy ending on this story...

Now when someone is going to create an API we first start defining it, how? We define the contract in a Swagger way. But what is that!?. "Swagger makes API design a breeze, with easy-to-use tools for developers, architects, and product owners". Basically a good tool to design, test and maintain your APIs.
There's an old saying that the time that you spend analyzing is the time you will save when you are developing time 3 or more.

I wouldn't jump into details but here you can find an example of an API definition using this tool: https://petstore.swagger.io/

What's your story? Which best practices do you follow?

How HTML gives us tooltips for free!