If you have come to this post, I bet you are struggling with all those bit operations and tricks as there are two many of them! These bit operations are not only useful in competitive programming questions but also in Dynamic Programming (where we have to save the current state), and reducing time complexities in certain scenarios.

Before heading to discuss the questions let's just get a glimpse of why you should learn bitsets and type of questions which you can't do if you don't have enough knowledge of bit manipulation.

We will be discussing each of the above questions and in the end, I would be sharing some of the questions from codeforces, Leetcode, etc. If you have any doubts in those questions, feel free to discuss in the comments.

Questions asking you to compute the maximum AND/XOR/OR of any pair in an array, directly or indirectly, are actually based on a rather simple trick. Let's First discuss the questions.

Q1. Find Maximum Binary AND pair from an array.

Codeforces Link of the problem:

This is rather a difficult problem to solve but this will let you think much.

Hint 1: First convert all the numbers to their binary forms and see if you see a pattern in finding the answer

Solution: Read Hint 2 one more time. We know that total digits in binary representation can't be more than 32 for int datatype. Now, think this way: We have to see if a bit can be set or unset in our answer. That means we are actually constructing our answer bit by bit.

We would do a simple iteration here starting from leftmost bit and then we would search for the elements in array having this bit as set (And also the all the bits in our current answer). If the number of such elements is greater than or equal to 2, we would add this bit in our answer.

Binary form of these numbers:

Why does this work?
A very frequent doubt which comes in mind is, how this algorithm differentiates between two numbers added in the answer. Like, I am first considering 12, 14 in for the second bit but there can be some number which actually satisfies our conditions but 12 don't. So the set bits of 12 would be removed! This would cause "some error". First of all, see the conditions clearly, the condition to add a number is that it should have bits added so far, so 12 won't be contributing any unique bit...

Querying inside a specific range. To be continued...

These problems may look sliding window technique problems at first! So be patient and see why we can't use sliding technique in such problems.

See this problem.
We have to find the size of the largest substring containing vowels in even counts.

So, how can it be solved using bitsets? Here we only have two options for any vowel, either it appears even number of times or odd number of times. So we can represent state of a vowel by a binary digit. And we have just 5 vowels, so the size of the bitset would not exceed 5. Now again stop reading and think!!!

I' m assuming you have given at least 10-15 min( if you haven't solved the problem yet). Here are the observations you should have with you by now:

So, long story short, just store the bitsets in an array or something where you store the index they are first found. If the bitset is repeating, the length formed by this bitset would be i-previousIndex+1. Note that we set perfect state's index to be -1.

Now, let's do this one. Here we have to find the number of wonderful substrings where wonderful string is a string in which at most one element appears odd number of times.

First of all, let's discuss how it's different from previous problem? Here we have to find the number instead of the length of the string and second, we have at most 10 characters in the string(which actually gives a hint to solve this problem using bitsets).

We again start off by creating a 10 length bitset. 0 for even frequencies and 1 for odd frequencies. But here we don't have just one perfect bitset, instead we have these 10 perfect bitsets:

Now if we have some bitset, say 1011011001, we need the exact same bitset along with all the bitsets which when subtracted from current bitset, gives you one of the said 10 "perfect" bitsets.
So, what we do is simple, for each ith character in string, calculate the bitset, and then iterate on the bitset itself and turn off one bit at a time and then search for the new bitset occurence in cnt array. If the occurence exists, you increase the answer by 1, else make a new entry in the cnt array. Also, here we do not store the indices in the cnt array, rather we store the number of occurences.

Type 4: Bitmasks with DP and Graphs, along with some binomial calculations.

This is perhaps the coolest form of bitmasks. Here the intuition is all it takes. You just need to think if you need the exact previous state for current dp or not.

Here are some good problems:

This is a combination of Bitmasks used along with BFS and DP. This is a hard problem to start off with but I chose this as it includes a simple bitmask. Also, if you have no clue to solve this problem in about 30 min, please just look at the solutions and hints as it is not a very simple problem.

Hint 1: You need a BFS for sure, but if you keep track of visited nodes, you won't be able to visit that node again(See the example test case given in leetcode) So, you need to find a condition where you may get stuck in an infinite loop if you do not maintain a visited array. Also, as it can be from any node, you may try a multi-source BFS type of thing.

Hint 2: What will be unique for each path? Like in the below example, we have to go to 0 again from 1 but not again to 1 as it is already fully explored. When we should not visit a node? It's simple: when we have already explored all the nodes of the subgraph of that child and are entering again with the same child.

Solution: Okay, that's a heavy question. There are many ways to solve it, but let's first discuss the problems we have while doing a BFS:

Okay, we got our problems, let's start step by step to solve them.

For example in the figure below, our queue looks like this 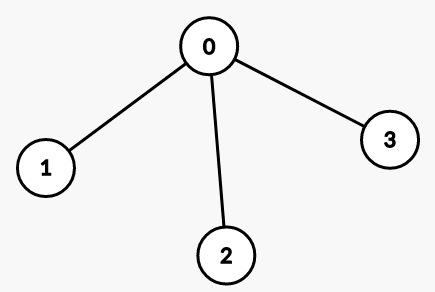 But really, do we only have to store the nodes in the queue? How do we know that all nodes are now visited? Yeah, you guessed it right! We use bitmasks here! The first hint was actually in the constraints only. N can be upto 12 which is quite less. You can use a set here but that's a little slow than bitsets.

So, we store the bitsets along with the current node in the queue. Also, we have to just return the longest path, so we need a variable to store that as well. You can use a pair of pair of bitsets and int and int, but I would prefer using a user-defined data structure to store it.

Now, we have our visited nodes for each source, current nodes, and the length of the path as well. Now, we need to tackle the problem of cycles.

If a cycle occurs, we are sure that the exact same path with same current node would have occurred before as well. That means, if we the same bitmask and node are repeated again, there exists a cycle. In this example only, when we go from 0 to 1 and go back from 1 to 0, now we again can start with 1 but bitmask configuration looks like:

So, we will store these 2 in a set of pair of bitmask(in form of int) and current node.

All in all, here is the brief: Just do a BFS with queue initially filled with every node and each queue element would store a user defined structure containing a bitmask, a current node, and length of the current path. We would be storing the bitmask and current nodes in a set of pair and skip the exact same configuration already in set. We will break when all nodes are visited at least once.

Now, I think you might have had the feel of solving these type of problems. So here is a list of problems solvable by the above knowledge you had till now:

How to ace the coding interview in 2022

Once suspended, abhi824 will not be able to comment or publish posts until their suspension is removed.

Once unsuspended, abhi824 will be able to comment and publish posts again.

Once unpublished, all posts by abhi824 will become hidden and only accessible to themselves.

If abhi824 is not suspended, they can still re-publish their posts from their dashboard.

Once unpublished, this post will become invisible to the public and only accessible to Abhinandan Sharma.

Thanks for keeping DEV Community 👩‍💻👨‍💻 safe. Here is what you can do to flag abhi824:

Unflagging abhi824 will restore default visibility to their posts.