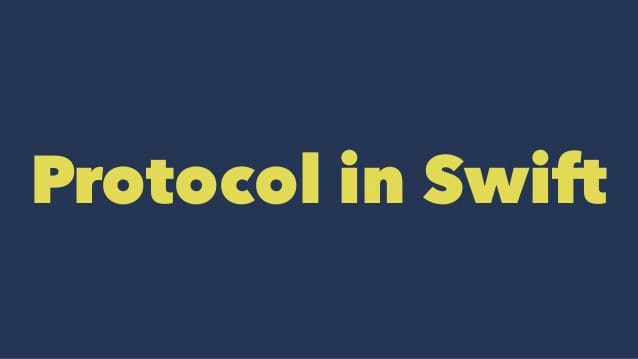 A protocol defines a blueprint of methods, properties, and other requirements that suit a particular task or piece of functionality. The protocol can then be adopted by a class, structure, or enumeration to provide an actual implementation of those requirements. Any type that satisfies the requirements of a protocol is said to conform to that protocol.

Classes, structs, and enums can adopt these protocol by placing protocol’s name after the type’s name, separated by a colon, as part of their definition. Multiple protocols can be listed, and are separated by commas.

If a class has a superclass, list the superclass name before any protocols it adopts, followed by a comma.

The above protocol simply says any class/struct/enum that want to adopt me must have a property called fullName which must be a type of String and the property must be a gettable property which was represented with { get }.

A gettable property is a property we can only read from after we have given it an initial value.

When we try to assign a new value to the fullName property, it will fail simply because of the let keyword we used when initializing the Lecturer struct.

Let us assume we want to make a smoothie and the requirements needed to make the smoothie are Milk and Dairy products. The make a smoothie, we have to blend some fruits, as well as some Dairy. So we are going to need a blend method that all the classes that will make a smoothie must have, hence we have to enforce this by using protocol like below

To make the smoothie, we need to call the blend method on each classes that conform to the Blendable protocol and we can achieve

Example Three: When to use a protocol

HAS-A relationship is a type of relationship where two classes are not the same but share similar properties / method. A good example is a Bird and an Airplane. A Bird can fly as well as an Airplane. This is the best time to use a protocol.

I am happy to share this article with you. If you’ve enjoyed this article, do show support by loving it . Thanks for your time and make sure to follow me or drop your comment below. You can read more about Protocol here👇
here

Working with VideoToolbox for more control over video encoding and decoding.