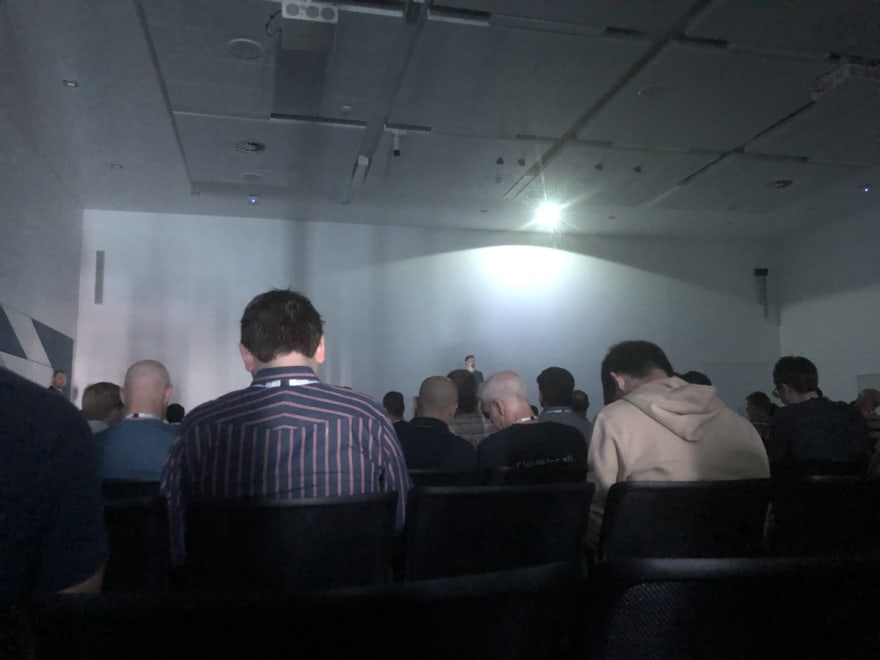 Yep, that's me. You're probably wondering how I ended up in this situation.

Last week at Microsoft Ignite The Tour Sydney I gave a talk and you might notice something odd about that photo, there's no projector. Also, there's no overhead lighting and you can't tell from a picture, but the mic isn't working.

It's just me and an emergency lighting system.

About 30 minutes into my session, MOD10 - Migrating Web Applications to Azure, I had just wrapped up a live demo in which I created a vnet using the Azure CLI. I'd stuffed up this demo because I failed to type one of the command line arguments correctly so after a few retries while the audience watched and offered solutions, I got it working.

But now the nervous speaker sweats were setting in and I made a joke that I wished the A/C was up a bit as it was getting warm on stage then, as if by fate, the room was plunged into darkness.

The Power Goes Out

This is pretty much the worst-case scenario as a speaker, the room power is out (we had emergency lighting on and that's all that lit me on stage), so the projectors are offline and my mic no longer works.

As a speaker you plan for failures. If you're demo breaks you jump to one you prepared earlier. If the connectivity is poor you rely on a video of the demo. If your laptop crashes you wait for a reboot. There's not much that can't be recovered from during a talk if you've done some planning.

But the power going out, that's a bit different.

The Powers Out, What Next

There was 15 minutes left in the talk, I've got a few hundred people in the room and all I had left were live demos, so what do I do next?

Thankfully, a power outage actually gave me a moment to think, as the room is in a state of confusion, I started to process my options. In my peripheral vision I could see the AV tech checking the cables coming to the stage but it's clear that that's not the problem and they likely have no more information than I do. I decided that going over and talking to them wasn't going to do anything more than delay a resolution and increase the stress they are likely feeling already.

So what should I do? Should I kick everyone out? Well, there's still 15 minutes left and the optimist in me thinks that the power will come back on and I really want to finish this talk.

Instead, I decided to have some fun and fall back on my core speaking knowledge, that the slides and demos are only there to supplement the talk, and I should be able to present the story without them.

It's Time for Interpretive Dance

Well, not literally. After a quick apology and a suggestion that if people wanted to leave, they could, I picked the talk up from where it had been before the power went out and started describing the next steps. With my laptop still powered on I started creating a VM in Azure (the next demo I had to do) and explained the information you need to provide, the options that appear, the configuration, etc.

There was a lot of hand waving and a lot of me projecting my voice as loud as I could (it was a long room) but my intent was to give people enough of an idea of what they would see in the portal should they want to do the demo themselves.

But I had another reason to keep going, to try and reduce stress for the AV folks. I had no doubt that they were stressing out on the fact that the room had lost power but if I was to constantly throw looks their way or pointing towards them in any negative fashion (whether in jest or not) wasn't going to help speed things up. After all, they are doing the best they can to resolve the issues, the least I can do is be professional and let them do their job.

After about 10 minutes it was clear that power wasn't going to be restored for the remaining 5 minutes so I wrapped up the session, thanked everyone for coming, promised to share the links to demos, slides and a recording so people could see what they missed and called it a day.

I was surprised that not many people left as a result of the power outage, maybe they were hoping it'd come back on or maybe they were watching with morbid curiosity on how the last 15 minutes would turn out, who knows!

I had a few people come up to me and applaud my efforts to keep going given the circumstances and then speaking with the AV person it turns out that half the floor we were on lost power and no one knew why!

In the end it was a fun adrenalin rush, I've now had a chance to see how I'd really go under pressure, there's not many other possible failures during a talk that could be worse and hey, it's a good story to tell! And hey, I know I can power through just about anything that goes wrong during a talk. 🤣

But I must admit that the next time I give that talk I do hope to have power for the whole 45 minutes. 😉

So tell me, what's your presenting horror story?

Hi, my name’s Aaron Powell and I’m a Cloud Developer Advocate (CDA) at Microsoft. My area of specialty is front-end web dev and .NET (especially F#), but I enjoy doing silly things with technology.

Have you taken the 2020 Stack Overflow survey?

For some reason, this survey didn't hit my radar until just now. I'm usually on top of it! Looking fo...

What changes have you made in this pandemic as a programmer to make your day more productive?

What Did You Learn This Week --April 3?

Trending on DEV
April 3, 2020: What did you learn this week?
#weeklylearn #discuss #weeklyretro
What was your win this week?
#discuss #weeklyretro
How To Become Better At Problem Solving
#productivity #tutorial #todayilearned
Share your WFH setup!
#discuss #workstations
What is your favourite operating system?
#discuss #watercooler #mjasks
Designers shouldn't code.
#design #career
How to feel less overwhelmed as a developer
#todayilearned #career #beginners
How I Got My Website to Load in 1 Second
#programming #webdev #showdev #productivity