Recently I've been trying to learn more about the Rails assets pipeline. The standard documentation is very well written and has tons of tips and best practices but there's something I was still missing: live reloading the assets, in particular the css/scss assets.

Working with React this is the pretty standard behaviour: you update a file and you can instantly see the changes on the browser.

The Rails documentation does not explain how to obtain this behaviour and, honestly, I've never managed to make the live compilation work, so I've been killing the server, running bundle exec rails assets:precompile and restarting the server the whole time, until now.

Luckily, a few days ago I discovered an handy gem that solves this issue in a very simple way: rails_live_reload. 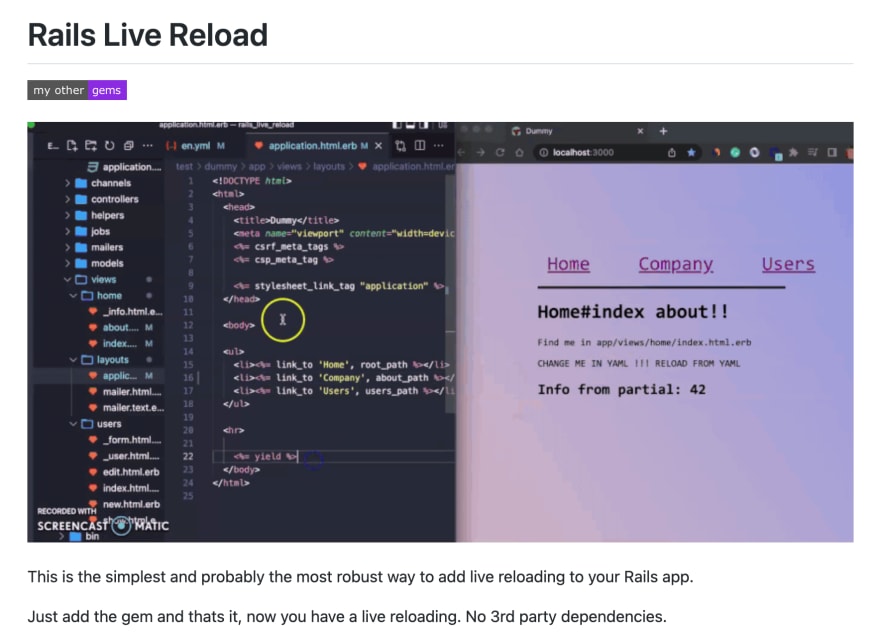 Adds this gem in the development group, or whatever group you need, in you Gemfile

Open the config/environments/development.rb file and add these lines:

We need to open a terminal window and spawn the process that watches for changes in the the css/scss files.
If you are using the dartsass-rails gem you can run:

while if you are using cssbunding-rails or any other solutions you probably want to run:

keep this terminal running, do not kill it.

Finally, open a new terminal and run the Rails server to enjoy the live reloading assets 😎.

Feel free to write any suggestion or question in the comments. I would be really happy if someone could explain to me, and everyone who will read this tutorial, why the config.assets.digest = false is required to make the auto compilation/reloading work 🤯

Once suspended, a_chris will not be able to comment or publish posts until their suspension is removed.

Once unsuspended, a_chris will be able to comment and publish posts again.

Once unpublished, all posts by a_chris will become hidden and only accessible to themselves.

If a_chris is not suspended, they can still re-publish their posts from their dashboard.

Thanks for keeping DEV Community 👩‍💻👨‍💻 safe. Here is what you can do to flag a_chris:

Unflagging a_chris will restore default visibility to their posts.