Everything you need to know about kotlin coroutines

My agenda for this blog post is to get yourself familiar with different terminologies of coroutines and answer the following questions:

To understand how coroutines work and use them effectively in real-world applications, you need to first understand its core concepts.

We are going to cover the following topics in the rest of the write-up:

The two most important building blocks to create/start/run new coroutines are coroutine scope and coroutine builders.

If I have to give an analogy with threads, coroutine scope can be seen as Java’s ExecutorService and coroutine builders are factories to create Runnable instances.

To demonstrate that coroutines are light-weight, let’s look at the following examples where we create 100 thousand coroutines vs 100 thousand threads and print(".") in each one of them.

The above application does not crash and prints 100_000 dots.

Note: Do not worry about launch and runBlocking used in the above example, this is explained in detail in later sections of this article. Just know that runBlocking creates coroutine scope which can be seen as setting up an environment to execute coroutine and launch is a coroutine builder that spawns new coroutine, schedules it for execution in the environment.

CoroutineScope is an interface that has a single abstract property called coroutineContext.

CoroutineScope is nothing but a CoroutineContext, the only difference is in their intended use. Roman Elizarov explains this in detail in following blog post

Coroutine Context and Scope. Kotlin Coroutines have a context. There… | by Roman Elizarov | Medium

The important thing you need to know is that whenever a new coroutine scope is created, a new job gets created and associated with it.

Every coroutine created using this scope becomes the child of this job. This is how a parent-child relationship gets created between coroutines. If any of the coroutines throws an unhandled exception, it’s parent job gets canceled which ultimately cancels all its children. This is called structured concurrency, I highly recommend this blog to know more on this topic.

This is useful for UI components, it creates SupervisorJob and all the coroutines created with this scope runs on the Main thread. Because it creates SupervisorJob, failure of any coroutine does not trigger the termination of others unlike I have mentioned previously in the context of structured concurrency. Failures of child coroutines can be handled using CoroutineExceptionHandler.

Note: To work with the Main dispatcher, following additional platform specific runtime dependencies required to be added to your project:

This creates a coroutine scope from provided coroutine context and makes sure that a job is associated with this scope.

The following example demonstrates creating a new CorotuineScope without any Job passed externally but internally it creates one. It also shows a glimpse of structured concurrency. Child coroutine (C*hild-A*) throws exceptions which result in the cancellation of another coroutine (Child-B).

Let’s say you have some asynchronous suspending tasks and you want to wait for results from all of them and then perform some action. In this scenario, you can use coroutineScope, fire all the tasks parallelly and then wait for their results.

This is a singleton and not associated with any Job. This launches top-level coroutines and highly discouraged to use because if you launch coroutines in the global scope, you lose all the benefits you get from structured concurrency.

The reason to avoid GlobalScope. We do not recommend using GlobalScope… | by Roman Elizarov | Medium

The following example demonstrates that there is no Job associated with GlobalScope and the exception is thrown in one of the coroutines launched using GlobalScope does not affect other coroutines hence we loose structured concurrency.

Let’s say we have mutable state accessed from different coroutines concurrently and we want this state to be thread-safe.

There are multiple ways to achieve this but I am going to show using single-threaded executor service.

In the following example, 1000 coroutines are created concurrently and each coroutine increments counter value. In the end, asserting that counters value is 1000 proves that there are no race conditions in the solution. You can try printing thread name in the incrementAsyncfunction and verify that all running on the same thread.

Background job responsible for solely doing side-effects. Conceptually Job is a cancellable thing with lifecycle associated with it.

Coroutines implement Job interface which is responsible for maintaining the lifecycle of a coroutine.

Jobs are designed to have a parent-child relationship and this helps a lot in achieving structured concurrency.

Let’s say we have three jobs A, B, and C. Job B and C are children of Job A. Now if for example Job C fails with an exception other than CancellationException, parent Job A gets notified and A immediately sends termination to other children in this case to Job B. This way structured concurrency is achieved. 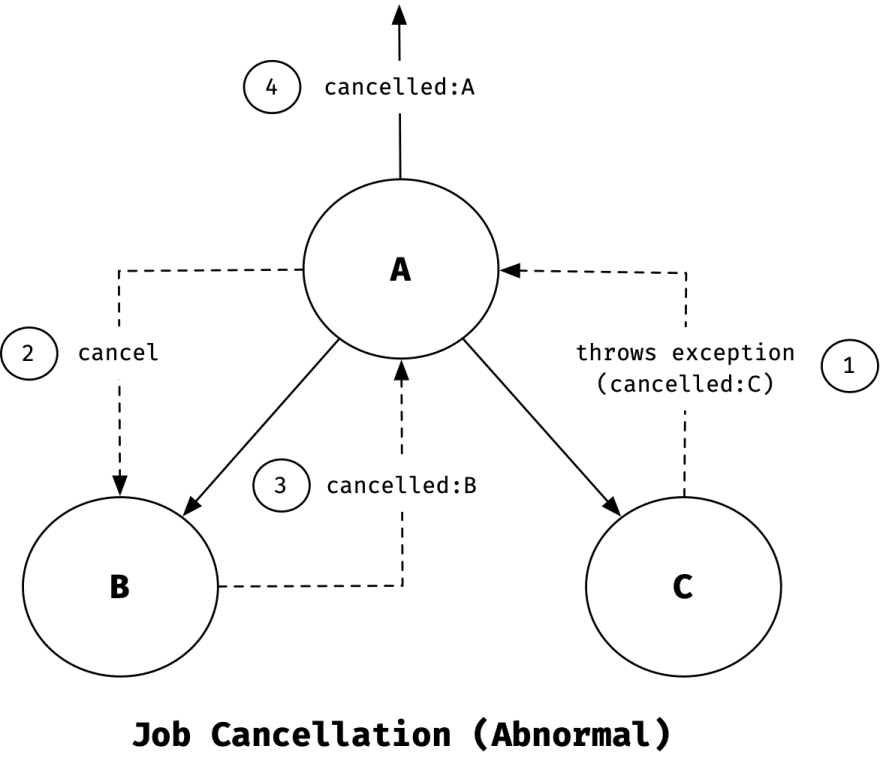 Note: If the cause of the cancellation is CancellationExcpetion then it is considered to be canceled normally hence such cancellations need not start sending termination signals to other siblings via parent.

A parent-child relation has the following effect:

From the docs: Deferred value is a non-blocking cancellable future; it is a Job with a result.

Deferred has few additional methods than Job to get completed results either successful or exceptional.

There are multiple possible ways to create coroutines based on different requirements. In this section, let’s take a look at a few of them.

The two most commonly used coroutine builders are launch and async.

Note that these are extensions to CoroutineScope which means, without coroutine scope, you can not create new coroutine.

This creates new coroutine and returns a reference to coroutine as Job. Using this handle, you can manually cancel launched coroutine using the cancel method available on Job.

Launch is used to perform asynchronous fire and forget type of operations where you are not interested in the result of the operation.

This creates new coroutine and returns a reference to coroutine as Deferred. Using this handle, you can manually cancel launched coroutine using the cancel method available on Deferred.

Async is used to perform asynchronous computation where you expect a result of the computation in the future. Once the result is available, you want to perform other operations using this result.

It is very important to note that, when you lunch a coroutine with these constructs, the new job gets created. It inherits the coroutine context and corresponding parent job from where this was launched. The newly created job gets attached to the parent as a child node.

What is the default behavior of launch and async?

withContext construct is exactly designed for this purpose. Following example demonstrate the usage of this:

Above example, withContext uses dispatcher from the new context, shifting execution of the block into the different thread if a new dispatcher is specified, and back to the original dispatcher when it completes.

But if you look at the first two lines of output, both got executed on the same thread but the third line got executed on a different thread. This is because IO dispatcher shares threads with a Default dispatcher, so using withContext(Dispatchers.IO) does not lead to an actual switching to another thread & typically execution continues in the same thread. This avoids thread switching costs. But that thread gets marked as IO thread and gets removed from a thread pool. Hence you see line three got executed on a different thread.

runBlocking has very limited use cases and highly discouraged. Avoid using this unless it is the last solution to your problem and you know what you are doing.

runBlocking starts a new coroutine and blocks the current thread until it’s completion. It is designed to bridge regular blocking code and libraries that are written in suspending/non-blocking style. It has very limited use cases, for example,

Find more details on this here.

We have already come across suspend keyword many times in this post. Let’s go deep into what suspending functions are!

suspend is a keyword in kotlin which indicates function can be paused and resumed later point in time. You can use suspending functions to call long-running computations without blocking the main thread.

Eventually, Kotlin code gets converted to JVM bytecode and there is no notion of suspend keyword on JVM. Under the hood, the kotlin compiler converts suspend functions to another function without the suspend keyword, which takes an additional parameter of type Continuation which is nothing but a callback.

Since v1.3, Continuation has only one method resumeWith(result: Result) , earlier it used to have two methods resume(value: T) & resumeWithException(exception: Throwable)
Result models eithersuccess with value of typeT or failure with the exception of type Throwable

If you are really interested to know how all these things work behind the scenes, I highly recommend you to watch Roman Elizarov talk — Deep Dive into Coroutines.

In this talk, Roman Elizarov mentions:

Continuation is a generic callback interface.
Whenever you invoke suspending function, you actually invoke callback, its just callback is implicit and you don't see it in code. You just code it in nice direct style with callback behind the scenes.

Managing Gaps in Rows, Columns (or even both!) with KotlinJS