Intro: About the Caesar Cipher

The Caesar Cipher is a simple cipher that has been around for a long time. Julius Caesar used it in some of his correspondence over 2000 years ago. It has applications in other ciphers, but offers no useful level of security due to how easy it is to decipher.

The cipher works by shifting each letter in a message the same amount for each letter. For example, if I set my rotation factor to three, the letter ‘a’ yields ‘d’. 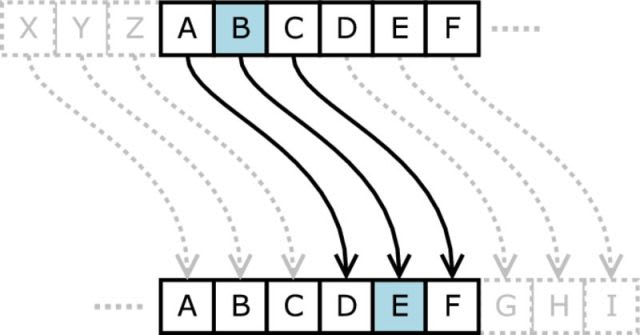 Now, let’s take a more complete example. If we use a right shift of 20 and and apply it to each letter in the message “Hello World!”, we get the ciphertext “Byffi Qilfx!”

Conversely, if we want to decrypt this, we apply the cipher in reverse and shift left instead of right. From this, we see that the two variable parts of the cipher are 1.which way you shift, and 2. by how much.

As an exercise, I wrote a simple python script to perform the rotations for me. First, I worked out the math for handling the shift (including wrapping) since this was the most complex part. Then, I iterated through each character and applied the computation. Finally, I added a simple CLI and then posted it to Github.

Below is my Caesar cipher implementation. Python doesn’t let you perform math operations on letters so you have to use the “ord” function to convert them to the Unicode code point first.

Let’s work through the apply_rotation method with a single letter, ‘a’ since this is a little difficult to read.

Before looking at the rest of the math, if you index the 26 letter alphabet 1-26, 5 is the letter ‘f’ which is what we want to transform. Adding the shift gives us 8 which maps to the letter ‘i’ which is our current result. Python doesn’t know 8 yields and ‘i’ though, but that’s okay because the remaining part of the equation fixes it up for us.

Performing a modulus of 26 just returns 8 for this example so we can ignore that for now. That leaves us with the last step of adding the Unicode code point value of “lower” to 8 i.e. 97 + 8 = 105. Now we can convert the Unicode code point back to a string using the python built-in method “chr” which gives us ‘i’.

This is pretty simple math though, so why do we add lower and subtract it in the same equation? Don’t those cancel each other out? Yes, but since the alphabet is based on 26 characters we need to 0 out the Unicode code point values to our 1-26 index so that we can make use of the modulus to handle shifts that need to wrap.

The modulus helps us with our code wrapping. If we go through the math again, but instead apply a shift of 3 to the letter ‘z’ which has a code point of 122 we have to wrap the letters otherwise we get a code point of 125 which is the character ‘}’.

The Caesar cipher is a simple cipher that shifts each letter by a set amount. We produce the deciphered message, by performing the shift in reverse.

Introduction to fundamentals of programming

morgana
Building and securing all the things. Python is my goto. I'm a software eng by trade, background in SRE/Ops roles, and enjoy security.
What are the toughest communication challenges in software development?
#discuss #career
What was your win this week?
#discuss #weeklyretro
Explicit is better than tricks
#javascript #programming #beginners #productivity