In a typical Spring Boot application written in Java, our main method will look similar like the one below.

Static method run from SpringApplication class will create a single ApplicationContext. The context will contain all custom beans defined in the application, as well as beans which will be created during Spring's auto-configuration process. This means that we can request any bean from the context to be auto-wired, with help of Spring's dependency injection mechanism, wherever in our application. In most cases this will be preferred behavior.

However, there could be situations where we don't want that all defined beans are accessible within the whole application. We might like to restrict access to some specific beans because a part of the application shouldn't know about them. The real-world example could be that we have a multi-modular project, in which we don't want that beans defined in one module know about beans defined in other modules. Another example could be that in a typical 3-layer architecture (controller-service-repository) we would like to restrict access to controller beans from repository or service related beans.

Spring Boot enables creating multiple contexts with its Fluent Builder API, with the core class SpringApplicationBuilder in this API.

We will start with a simple Spring Boot application having only one context. The application will be written in Java and will use Maven as building tool.

The application will contain only core Spring and Spring Boot dependencies with a help of spring-boot-starter. Resulting pom.xml file should look like the one on the link.

There are two different packages in the application

Source code of the single context application where WebService has dependency on DataService can be found here.

If we look into the main method and retrieve the context from the SpringApplication's run method we can query for beans in the context like in the code snippet below.

Spring will resolve both beans and return singleton instances (by default) for both classes (WebService and DataService). This means that both beans are accessible from the context via getBean method and Spring can auto-wire an instance of DataService into the instance of WebService via dependency injection mechanism.

We could achieve reversed scenario where DataService has dependency on WebService. Spring will be able to auto-wire bean of type WebService into the DataService bean.

The source code with reversed dependency direction can be found here.

All this is possible because all beans are part of the same context.

With a help of SpringApplicationBuilder we can create multiple contexts in our application and form parent-child relationships between them. This way we can restrict access to the WebService bean in the way that it cannot be injected into DataService.

This could be achieved in a couple of steps

Context hierarchy defined above in the SpringApplicationBuilder can be represented by the following diagram.

If we now try to autowire WebService into DataService bean we will get NoSuchBeanDefinitionException stating that WebService bean cannot be found. This comes from the statement that beans defined in child contexts are not accessible from the parent context. The source code with these changes can be found here.

Another interesting hierarchy which can be applied is when we have a single parent context with multiple children contexts, where each child context forms a sibling relationship with other child contexts.

Let us see how our main class looks like for this case.

As we can see, we have introduced additional context EventContextConfiguration in a separate package event. The context is defined in a similar way as the other child contexts.

Diagram for this kind of context hierarchy is shown below. 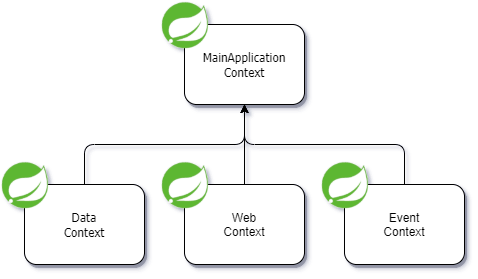 As we can see from the diagram, all child contexts share the same parent and form sibling relationship.

If we retain the same dependency hierarchy, where WebService depends on DataService, we would get NoSuchBeanDefinitionException exception, because it is not accessible from the sibling context. The source code for this stage of the application can be found here.

Thing to note is that child contexts can still access beans defined in the parent context.

In this installment we have seen how we can create a Spring Boot application containing multiple contexts and how they can form parent-child relationships.

We have also mentioned a couple of real-world scenarios where we could structure contexts in hierarchy and how.

Also, we have seen that there are multiple ways to form parent-child relationships including sibling relationships.

Java for beginners: Installation of Java

Once suspended, __nikolamicic21 will not be able to comment or publish posts until their suspension is removed.

Once unsuspended, __nikolamicic21 will be able to comment and publish posts again.

Once unpublished, all posts by __nikolamicic21 will become hidden and only accessible to themselves.

If __nikolamicic21 is not suspended, they can still re-publish their posts from their dashboard.