We’re all a little obsessed with productivity.

With all of the new time-tracking applications and productivity-focused books coming out all the time, productivity rates must be skyrocketing. Right?

According to the Economic News Release created by the Bureau of Labor Statistics, productivity only increased by 1.5% in the first quarter of 2019 and just a mere 1.1% over the last year. But don’t we all feel significantly more productive than we used to?

There’s a reason for that.

It’s common to confuse feeling busy with being productive. The amount of time logged on a timesheet doesn’t necessarily equate to how many important tasks have been accomplished (strange for a time tracking company to say, we know).

Productivity is about how much work you get done—not how long that work took you to do.

The reality is that none of us are as productive as we’d like to be.

What Is Productivity, Anyway?

Research shows the majority of our workday isn’t spent accomplishing any tasks. A study by vouchercloud suggests we’re only productive 2 hours and 53 minutes during an eight-hour workday.

But, what this also means, is that there is not a strong correlation between working more hours and getting more work done. Spending 20 hours per day chained to your desk will only marginally increase the amount of “real” work you complete, not push it through the roof.

How is the rest of the workday spent?

Humans are not robots.

Most work is not rote and repetitive in nature.

This means that it’s not feasible for us to sit down at a desk and bang out 8 hours of consecutive work. It’s just not happening.

Our brains simply aren’t wired for hours upon hours of continuous productivity. 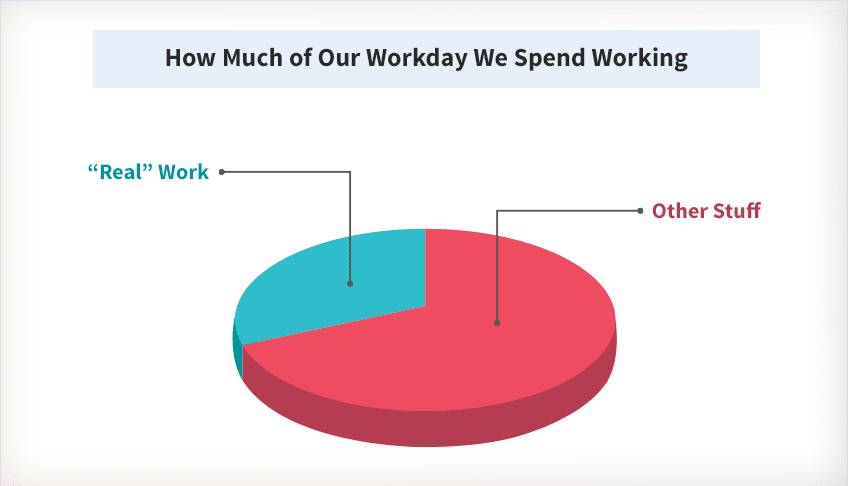 So how did we get here? Why do we think workers have to spend eight hours a day with their butts in their chairs at the office?

During the industrial revolution, it was common for people to work far more than 40 hours per week—think 80-hour workweeks at a minimum. Then, Henry Ford discovered that lowering the amount of hours worked each week actually increased the quality of the work.

In a move that was absolutely innovative for its time, he began offering workers twice as much money for shifts half as long as people worked at his competitors’ factories.
Ford reaped the benefits of this bold strategy.

People lined up for jobs at the Ford Motor Company, where cars were coming off the assembly line faster than ever because they were being built by happy, well-paid, well-rested workers. In other words, productive workers.

Since then, the 40-hour workweek has been standard.
The CDC’s Department of Health and Human Services created a summary of 52 applied psychology studies which all show negative impacts of working over 40 hours each week.
Does that mean 40 hours is the magic number for max productivity? Well, not exactly.

We haven’t found a magical number for how many hours people should work a day, and the ideal number likely varies depending on the field and individual employees.

While spending 40 hours at work each week might feel plenty busy, it doesn’t mean we’re necessarily productive—even if you’ve checked off most of your to-do list.

True productivity values the quality of tasks you complete over the quantity.

You can be the first person in every morning and the last to leave at night, but that doesn’t mean your output is the highest or best quality. Unfortunately, not all bosses have gotten that memo yet. Productivity is what happens when you work smarter instead of longer and harder.

To find out if you’re being productive, or just busy, ask yourself these questions:

If it turns out your answers to those questions point to busyness, not productivity, you are definitely not alone.
Most people spend a lot of their day feeling (or acting) busy. But if you actually take a tally of what they’ve accomplished, it turns out that they were not all that productive.

While that’s okay, generally, we all still like to get more done and spend less time doing it, right?

So here’s how to “hack” your productivity, but without the bullshit parts.

How to Get More Done in Less Time

Say you have the standard, Monday-through-Friday, 40-hour workweek. How can you be more productive in that given amount of time?

First, track your time to find out where it’s going each day.
That’s right—time tracking should be a tool you use for your own productivity and development, not so your managers can nitpick about how you spend your time.

One pattern you’re likely to see is essential, time-consuming tasks are often broken up throughout your day. Between meetings, the urge to frequently check your email, and coworkers stopping by to chat, you might not be doing enough “deep work.”

According to author Cal Newport in his book Deep Work: Rules for Focused Success in a Distracted World, deep work consists of “professional activities performed in a state of distraction-free concentration that push your cognitive capabilities to their limit.” It’s very similar to Mihaly Csikszentmihalyi’s concept of “flow” where you are fully concentrating on the task at hand so much that you lose track of time.

To conduct deep work, you need to set aside a specific chunk of time where you can be uninterrupted. This might mean coming in to work a bit earlier or later when there are fewer people around and no meetings scheduled. You aren’t allowed to check notifications for emails or social media. This uninterrupted time avoids the wasted time it takes to refocus on an interrupted project. 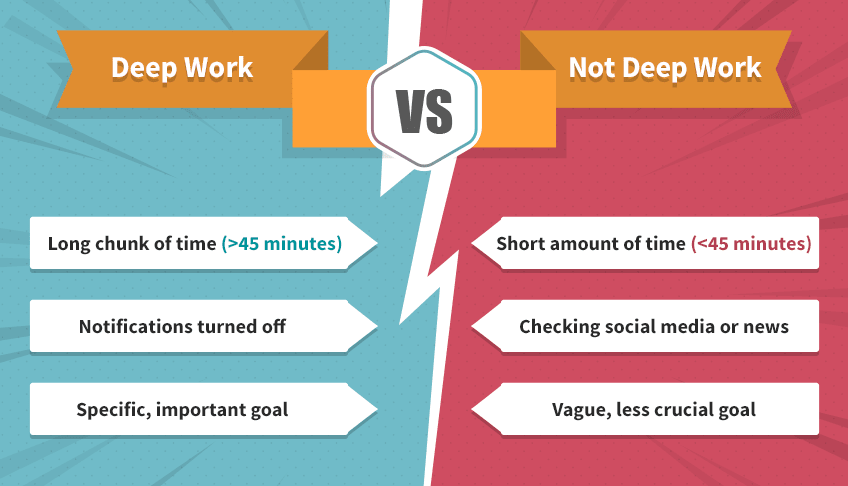 Can You Boost Your Productivity to 100%?

The simple answer? No.

You’re never going to be 100 percent productive. And that’s okay.

What’s not OK is the idea that employees should be 100 percent productive, and the effect that pressure can have on them.
Consider this: Almost a fifth of North American employees fear their bosses will believe they aren’t working hard enough if they take daily lunch breaks.

The opposite is true. Workers who take a regular lunch break have higher overall job satisfaction, feel they work more efficiently, and feel more valued by their employer. Breaks are essential. Even “microbreaks” of 30 seconds to five minutes can increase your productivity. Having your eyes focus on something other than a computer screen for a mere 15 seconds every ten minutes can decrease your fatigue by 50%.
Occasional breaks that involve movement are also critical for your health (yes, there are things more important than work). Sitting for a full workday straight is so detrimental to your health that the phrase “sitting is the new smoking” has gained popularity in recent years. Besides, when you’re healthy, you’re more productive.

The Center for Disease Control and Prevention discovered 66% of employers who provide wellness benefits (such as gym memberships and healthy food) reported benefiting from increased employee productivity. So while you may feel like blowing your nose with one hand and speed typing with the other will show your team how dedicated you are, you’re keeping yourself sick longer and being overall less productive.

Not to mention you’re probably causing others to lose productivity from sickness too. Instead of “toughing it out” next time you’re sick and going in or working from home, take some time to rest and recharge. Sometimes you need a day where your productivity is 0%.

You’re not as productive as you think, even if you feel constantly busy. You’re likely only working a small fraction of the hours you devote to work each week and some of that is busy work instead of deep work. While you can’t get your productivity to 100%, it’s definitely possible to increase your current level of productivity.

I published my first extension. Only for developer

4 resources on software team productivity everyone should know

Five Of The Best Productivity Tips For Web Developers In 2022

5 Tips to Maximize Productivity Every Developer Must Know