You are being brainwashed.

Every day, your team works to “solve” problems and come up with elegant solutions. You probably have group brainstorming sessions where the team gets all pumped up about the ideas that you generate.

But what really happens most of the time is the exact opposite of smart.

Your team huddles around and everyone quickly falls into thinking that the first idea or the one that came from your “smart” colleague was as good as it was going to get.

Groupthink plagues pretty much every group in existence.

It’s just psychology. When you get a bunch of people together who are relatively comfortable with one another, they tend to find that their ideas become more homogenous. People start to think in the same ways and come to the same conclusions—or they just agree with what everyone else thinks.

But this isn’t just harmless comradery.

Groupthink has serious and profound effects on productivity and the effectiveness of groups. But worst of all, it just makes people dumber and worse at their jobs.

The idea of groupthink isn’t a case of much ado about nothing. Diversity of thought actually breeds better business outcomes.

If everyone in a group simply rubber stamps an idea and moves on, then it’s likely that the idea has not been carefully considered or examined. It hasn’t been challenged or scrutinized in any kind of rigorous or intellectual way.

This leads to a lot of scary characteristics that stifle creativity, innovation, and decision making.

Symptoms of groupthink include:

Members of this group will not only censor themselves, but actively fight against any non-conforming thought, idea, or solution.

Plus, this becomes a self-perpetuating cycle. Groupthink drives homogeneity of thought, which drives further groupthink and introduces fewer dissenting ideas or opinions. This can continue to spiral until groups are practically incapable of critical thinking required to solve difficult problems.

Groupthink is the lazy approach to solving challenging problems.

It requires minimal mental effort from most members of the team, because they simply accept the proposals put forth by others. It also means less chance for conflict or confusion. 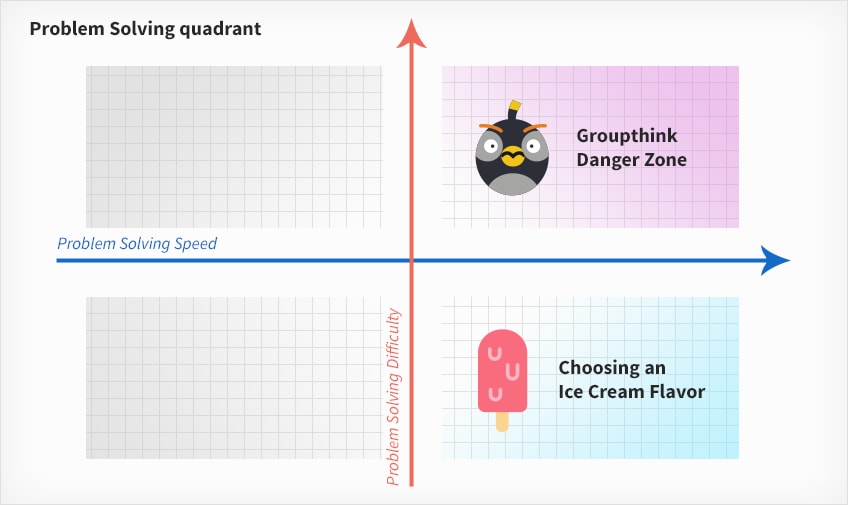 Even if you think you’re somehow special or immune to herd mentality, you’re probably wrong.

But that doesn’t mean we’re all stuck being mindless chumps (not all of us, at least).

Your team can be proactive at combating groupthink and working toward better, smarter solutions to problem solving. But it will take some deliberate effort.

Teams that want to avoid groupthink need to take proactive measures to overcome the phenomenon and to restore the sanity and intelligence of the team.

Your Team Should Fight More Often

Groupthink is driven mostly by our desire to be agreeable and to avoid conflict. People are afraid to scrutinize ideas of someone on their team – so much so that they’ll often end up just accepting what’s proposed without considering it for flaws or oversights.

When you get a bunch of people in a room, they tend to be agreeable. They want to go along with what other people say–they want to trust one another.

This is a hardwired part of our brain.

It’s also a phenomenon that’s exasperated in a work context. If you’re debating a topic with people who you’ll see and work alongside every day, you’re more inclined to take the confrontation-free way out rather than ruffling too many feathers.

But this is also the instinct that we need to overcome in order to avoid groupthink scenarios and poor decision making.

So the goal should be, essentially, to make sure that your team fights more often.

Of course, these don’t need to be heated screaming matches or knock-down, drag-out brawls over the best system architecture.

But there should be spirited debate and intelligent discussion.

Because the more that teams discuss and debate decisions, the more likely they are to make better, more informed decisions as a group.

This kind of disagreement can be uncomfortable, but there are some general strategies that will help to encourage more friction in the process.

First and foremost, it’s well documented that diversity within teams can help introduce a broader range of experiences and ideas.

While teams sometime resist the idea of faux diversity for its own sake, the truth is that our life experiences shape the way that we think. So it’s true that having a homogenous group—people who grew up in similar families, went to similar schools, and worked similar jobs—will inevitably lead to more homogeneity of thought.

Diversity on its own isn’t enough to fully rebuff groupthink. You need to be deliberate about how the team works together and how they collaborate on difficult problems.

At the center of most groupthink problems is a simple fear of confrontation.

Members of the team need to feel comfortable initiating positive conflict. They need to feel that the team is a safe space both to share ideas and to debate them. 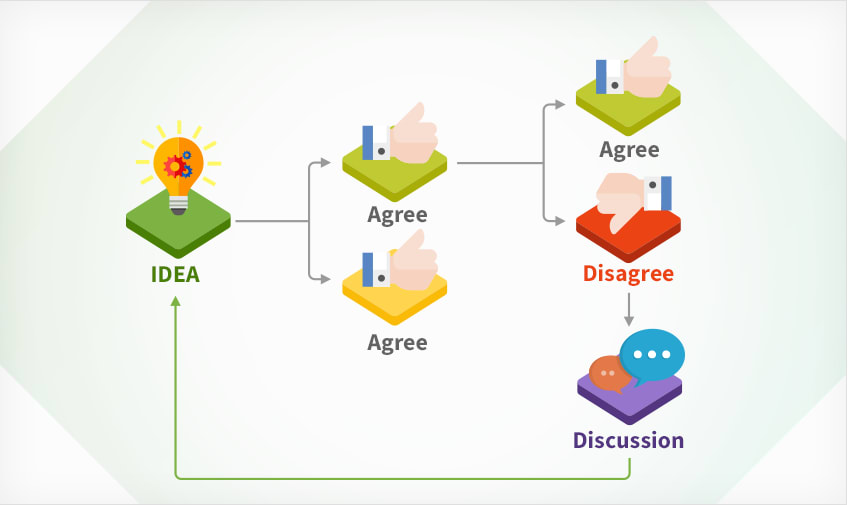 Practically speaking, this is about the communication norms within your group.

People should feel and understand that they’re able to express their ideas without repercussion. Often, policies are set up to reward the “best” ideas, the easiest solution, or the quickest resolution. But this means that teams are less likely to share other ideas.

Some ideas for how to encourage positive conflict and debate include:

Enforce a “no stupid questions/ideas” kind of policy — with vigor. Many organizations state this as a matter of policy but rarely put it into practice.

Reward or recognize employees for contributing ideas or views. Too often, teams only reward “winning” ideas rather than contrary ones, which conditions team members to internalize ideas they think may be rejected by the group.

Designate time and space for disagreement. When people are under the gun to come to a consensus or solve a problem, it can feel like there is simply no time to explore alternate solutions. Bake time for discussion into the decision-making process and indicate that this is the time for people to voice concerns or differing ideas.

Create rules for conflict and discussion. Set ground rules that encourage people to debate and discuss ideas without creating a rift in the team or introducing personal attacks, insults, etc.

Lead by example. If you’re a leader or manager, it’s part of your job to set the tone for the team. Any time there is a disagreement or discussion that involves you, it’s important for you to demonstrate that dissent is valued as a feedback mechanism and not something you cast aside or dismiss lightly.

One way that you can try to kickstart diversity of thought is to assign someone to play the role of devil’s advocate within your group.

This person’s job is to basically say no.

They’re meant to serve as a sanity check on the decisions that the group makes and to offer counterpoints or arguments against whatever ideas the rest of the group is circling around.

There is one problem, though.

When you arbitrarily assign someone to play devil’s advocate, it’s not the same thing as someone genuinely offering a different opinion. Chances are that this person is simply playing the part and not likely to offer a compelling or persuasive argument about alternative solutions or ideas.

And, because of this, the team is also likely to treat the assigned devil’s advocate exactly as that–an assigned instigator who is just playing a role.

If you try to synthesize dissent, people will just go through the motions.

So, what you need is a true outsider. You need someone to offer a fresh perspective and evaluate the idea objectively.

Get an Outsider Opinion

One final strategy for dealing with groupthink is to simply change the dynamics of the group.

By introducing an outsider, you gain fresh perspective that may not come from in-members.

Try having teams present several ideas to another team or party for their feedback. Ideally the outside person would be an expert or familiar with the topic to provide first-person feedback, ask difficult questions, and help unpack and analyze the solution.

Bringing in an outside force can rattle people’s brains enough for them to recognize flaws in the logic or alternate ideas that may be superior.

Because of this, it makes sense to take steps to safeguard your team from falling victim.

Put in the extra effort to improve

Don’t let your team be brainwashed by apathy.

How I remember everything I learn