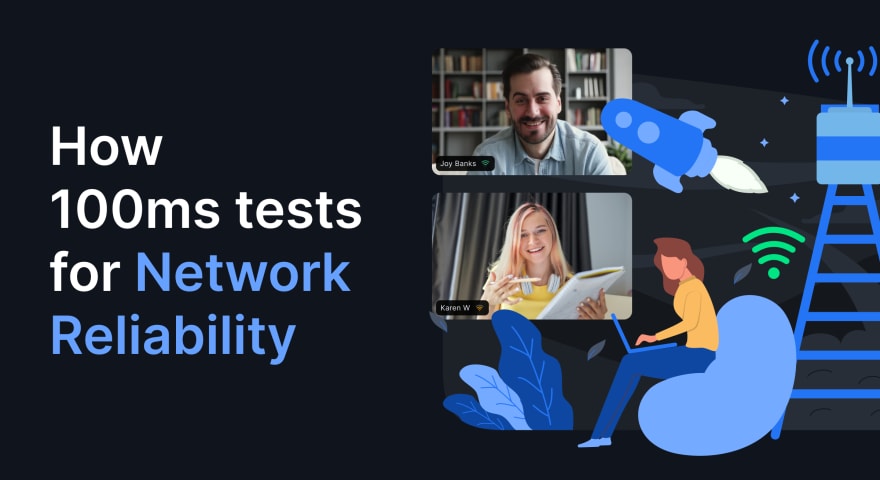 Innovative developers and product thinkers are looking to create engaging live experiences in their applications. So naturally, it's critical that the audio-video SDK they build these experiences on top of provides a stable, extensible, and scalable bedrock.

Among the many factors to consider before purchasing an audio/video SDK, network reliability stands out. After all, nobody enjoys running a twenty-minute monolog on a video call only to realize your network was down the entire time…

In this article, we've downloaded, deployed, and tested the reliability of the 100ms React SDK. To do so, we designed a series of tests that simulate common scenarios in real-life. Of course, since that's not fun enough, we decided to unleash our “full crazy” by battle testing each round against extreme conditions.

In the real world, individuals often have to deal with unstable or less-than-ideal network conditions. This happens when:

Deployment
100ms has a sample React app (100ms 2.0 Sample React App) meant to facilitate the testing of its SDK. We deployed it on Heroku and exposed it to a few commonly occurring end-user scenarios.

We had to generate some credentials from the 100ms console and then deployed this example React app on Heroku.

The SDK was deployed and tested on the Chrome browser running on macOS Monterey.

All these tests were 1:1 calls, performed with 2 people in the room. A few details about each test before we get into the results:

Network speed varies across devices. For instance, users operating on 4G mobile data often experience a volatile network, as it tends to vary in speed and stability. In this test, we checked how 100ms handles calls with varying connection speeds on low bandwidth.

Network crises can happen in the middle of a call. In this test, we checked how 100ms handles the sudden loss of network connectivity followed by automatic reconnection.

It is common for users to switch between networks inadvertently. For example, they might be on a call while moving between state lines or from a city to the countryside, which may affect network strength.

Network switching usually occurs when you move away from the range of one network to another or when you switch between your available networks for a higher speed. In this test, we checked how 100ms handles a network switch.

Audio/Video applications need to handle usage across varying network bandwidths. In this section, we monitor how 100ms handles calls for users with low bandwidth.

We used Network Link Conditioner to emulate different network conditions. We set the ideal resolution to 640x360, and tested the app on 4 different configurations: 300 Kbps, 500 Kbps, 800 Kbps, and 1 Mbps, switching from one to another in the middle of a call.

Test Results
The 100ms SDK handles the drop in bandwidth by prioritizing audio/video upload for other peers instead of audio/video download. 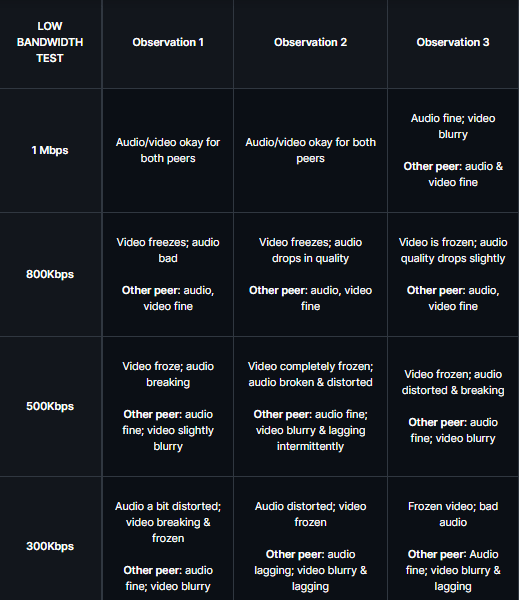 In this section, we check how 100ms handles call connectivity when a user’s network connection gets switched off, or drops for several seconds.

Testing Methodology for the Network Blip Test
First, we check the call by switching off the internet connection for 10 seconds. This is done by toggling the connected wifi network from the menu bar and connecting back by re-toggling the same.

Then, we iteratively repeat the same test for 20, 30, 45, and 60 seconds. While doing so, we observe the state of the call connection and how the app behaves during disconnection.

Test Results
The 100ms SDK reconnects every time when internet is disabled for 10, 20 and 30 seconds. When switched off for 45 and 60 seconds, the app tries to reconnect for 35s before disconnecting entirely. 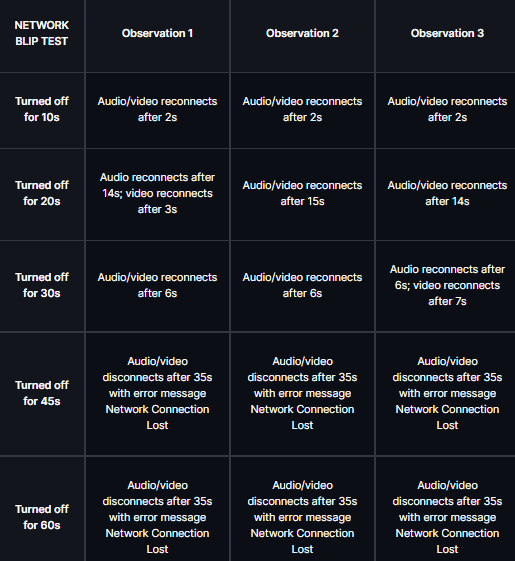 Apps are often exposed to different network conditions in the real world. In this case, we’ve tested how the 100ms SDK reacts when the app moves from one network strength to another.

Testing Methodology for the Network Switching Test
This test checks how 100ms handles connection when switching from one network to another. We tested the app in 3 Wi-Fi networks:
2.5G and 5G from the same router, and a mobile hotspot.

We waited for the call to reconnect during every network switch and monitored the time (in seconds) it took for the reconnection to occur.

Some of the flawed behavior in the ‘Wifi 2.5G to Hotspot’ test section might be due to the unstable 4G network connection we experienced while testing. 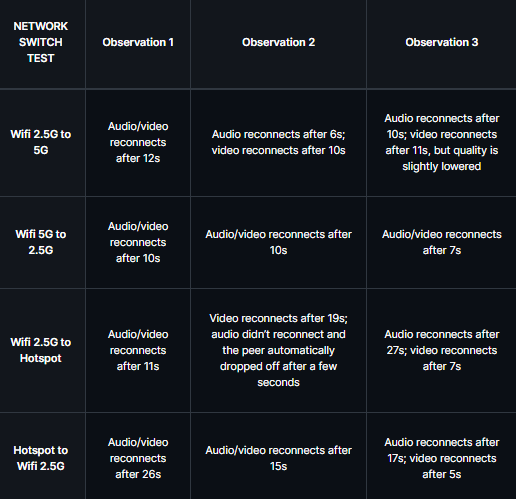 Given the centrality of reliability when it comes to choosing an audio-video SDK, we decided to lay all our cards on the table and reveal exactly how we fare in diverse network, bandwidth and end-user circumstances. Across all tests 100ms fared well under regular usage conditions. In some cases, like bandwidth drops, the SDK allows for graceful handling of degradation issues.

Of course, as an SDK provider, we pride ourselves for making 100ms even more bullet-proof, so we can’t wait to elegantly solve across all these conditions and meet you again with even more aggressive scenarios.