In the last log I got the basic stuff setup and the socket communication up and working.

Now I have done some actual planning.
Behold, a simple flowchart 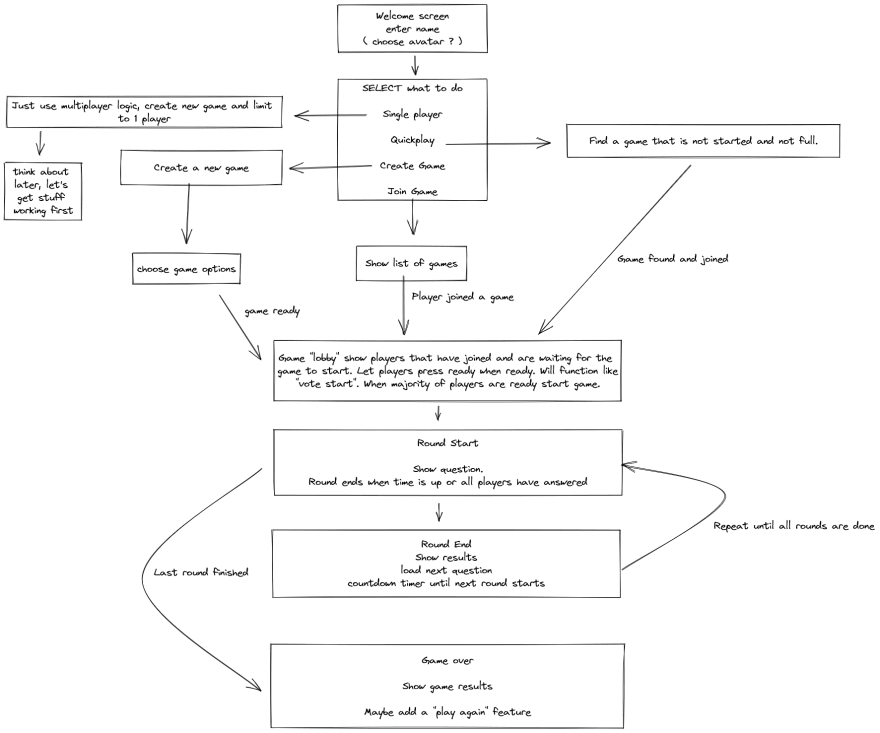 Before getting into the code stuff I have been working on just need to rant a bit..

My brain do not like coding event driven stuff.. many times I just can't make sense of it... last time I socket.io to make something a bit more complex I had to rewrite it all at least 3 times and it was still jank.. working, but jank.. let's hope this project will go better.

Rant over, let's do another dive into code without some actual planning, except the flowchart but that one does not care about the event driven stuff.. ;)

So I'm not a fan of OOP.. but sometimes creating some classes and objects just make sense.

The game needs players so I created a Player class. For now it's simple and later will for sure put more stuff in it.
The id used is just the socket.id, makes it ez to keep track of things.

So, we have a Player class to make player, now the player also need a game to be in.. so now create a Game class. (remember this is supposed to be multiplayer and can have several different games running at the same time.)

So now players be in a game and they can join and leave the game.
Just using a map to store the players in.

Now it's time to implement some actual logic.. so back to the eventHandler.js file where all the socket.io stuff happens..

So now there is a games map, this will store all the running games.

When a client emit "create-game" (when the press a create game button or something) a game is create from the Game class, for now only using the default settings from the class.
Then player is create and joined to the game. When this is done the socket is also joined to "room" with the same id as the game.

For other ppl to be able to join they will have to emit 'join-game'. Some checks are done and if all is good the player is joined to the game and also to the "socket.io room"

Booth of these "event listeners" will also run a callback when done, this is so they can notify the client of stuff it needs to know. I'm not sure if it is the correct approach to take, but to me it seems the cleanest way of doing it. The other option wld be to emit back event to the client but for that wld need to set up more listeners and stuff wld probably get rather messy fast.

I have also been setting up the 'disconnecting' listener that will run when a client (socket) disconnects, this happens for example if close the browser on the client.
It is basically just doing clean up. Removing the associated player from the game and delete the game if it has no players.

Well, not much is happening on client yet.. I created two simple components.. "Start" that is shown when you start the client, ie, go to the webpage.

So yeah, it only has 3 buttons, pressing create game will create a game like i talked about in the backend section.
If get an 'ok' repsonse from the callback we set the store activeComponent to 'lobby' .. this will remove this component and show the lobby component.. this done by a "Svelte if" in the App.svelte, so yeah, let's look at that one next.

As u can see there is not much going on yet.. just switching what component should be shown.

The Lobby.svelte is even more simple, it has no logic yet.

So at this point I can create a game by pressing the button and after that will be "transported" to the lobby.

Soo far it's all about setting up the basic logic and get things to work the correct way... code for actual "playing the game" will come later..

If find any spelling mistakes or stuff that makes no sense, yeah, then it's on me.. I don't proof read these logs and types what comes to mind.

Must have websites for every Frontend Web developer