YugabyteDB is optimized for OLTP, when scaling out the cluster, and the performance of bulk load was not the first priority. But bulk load is usually the first thing you do, and this may give a bad impression of performance, like this git issue comparing with PostgreSQL.

There were some improvement in the previous versions, but the latest, 2.13.2 starts to change the game.

I have run a one million row insert with all YugabyteDB versions available in the Docker Hub. My ugly script for this is at the end of this post, here is the result: 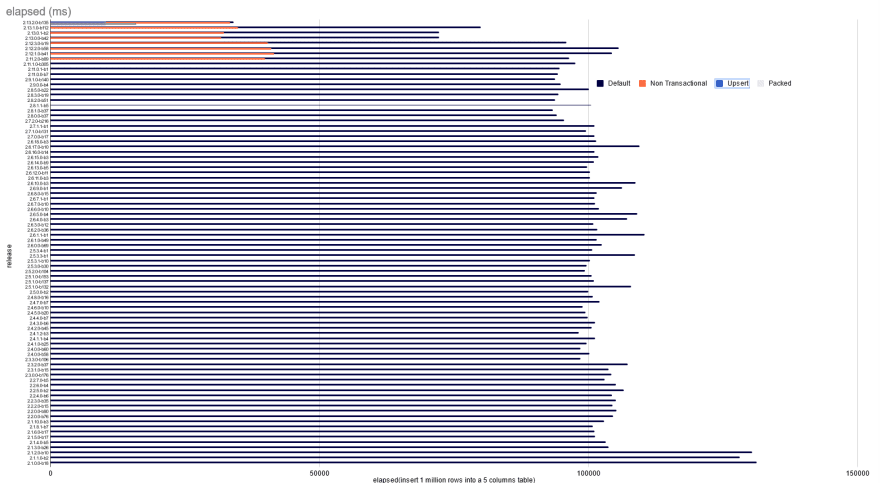 You can see that there was an optimization 2 years ago, with 2.1.3, but then nothing really changed until 2.13 for the default settings (in Purple "default")

The Orange "non-transactional" is something that existed for a while to improve COPY and that is now a general setting at PostgreSQL level since 2.8.1 with a 60% gain in insert performance. The default transactional behavior is what we expect in a SQL database: when a batch of rows is inserted in a transaction, all or none are committed. As data is distributed on many tablets, this is a distributed transaction. In YugabyteDB, this requires to update a transaction status tablet, and to store the provisional records in the "Intents DB", before moving them to the "Regular DB". This has a cost but that's the price to pay to be ACID.

However, for bulk load where, in case of error, you will truncate the table and load again, you can bypass that, with a "fast path" writing directly to the Regular DB with single-row transactions. This is what set yb_disable_transactional_writes = true does. It inserts faster but you must be aware of the consequences. Note that if you have secondary indexes or foreign key check, even a single row insert is a distributed transaction and using the fast-path for it is not consistent. So, this is fast, but to be used only for initial load of data, during migration, where the whole is restarted in case of failure.

There are other features introduced in 2.13.2 and here is a zoom on the latest release:

First, you see that in the latest version, using the fast path doesn't improve a lot the response time because the default is already faster. There was a huge effort to improve many different parts involved in the write path, even in the case of multi-shard transactions, and this will continue.

In Blue "Upsert" I have set yb_enable_upsert_mode=on. This must be explicitely enabled because it changes the behavior of the insert.

A table has a primary key and, in SQL, if you try to insert a row with the same key as an existing one, you get an exception raised. This is good to detect application bugs before corrupting the data. But this is also extra work: it must read, before the write. YugabyteDB stores data in LSM Trees which are optimized for writes, but this read operation hurts the performance. Enabling the upsert mode will not read the before image and the new row version will just replace the previous one if it has the same primary key value. This is acceptable when you load a file into an empty table, for example, because you know that your file doesn't contain duplicates.

In Gray ("Packed") I have set the tserver flag max_packed_row_columns=5. This controls a new feature that is disabled by default (max_packed_row_columns=-1) in this version. Tables and Index tuples are stored in DocDB with one sub-document per column. This has many advantages, like not having to copy the whole row when one column is updated, which is a well known PostgreSQL issue. However, this is expensive during bulk load for tables with many columns. This new feature allows to pack the whole row into one document. Future updates will still be per-column, but the initial insert will be optimal.

⚠ This is version 2.13, the packed column settings will change in version 2.15 (this commit) and I'll detail it in a future blog post.

The new parameter is: ysql_enable_packed_row

The script I used

There are other improvements coming. Here is the script I used to run on all versions for this experiment. (this one sets all values to their default, change the setand tserver_flags to what you want to test):

And how I gather the result:

You can play with those two last ones related with the flush of the write buffer, but the default values should be ok. Don't be fooled by the value 0 of session batch size. This just means that it uses the cluster-level setting ysql_session_max_batch_size which is 3072 in this version.

If you benchmarked bulk load to YugabyteDB in the past, then please try it again and let me know. You should see nice improvements.

The Role of Key Management in Database Encryption