My name is Markela and alongside being one of the organisers of You Got This From Your Couch, I spent the last year running a student tech club.

This post is about the ways in which I tried to convert a community to 100% online; including successes and failures. Without the usual in-person events to allow for ‘organic’ interactions and group-formations, I had to think about how I might replicate these chance encounters. Hopefully this won’t be permanent, but while large physical events are banned, my experience might be of use to some of you!

Having been the President of a tech society for 6 months prior to lockdown, running physical hackathons was something I was used to. The hackathon I had to try and replicate online was ‘Anvil Hack’, a creative hackathon with no serious objective to it (more-so a general theme). In hindsight, the broadness of the theme made it more difficult to streamline the process of group formation, discussion, and finally project creation/ building.

We used Discord, a program similar to Slack, to host the entire event. The pros were that I was able to create all the relevant channels needed for the topic, workshop organisers were able to stream their workshops with ease in the voice channels, and generally asynchronous messaging services allow for some great conversations to occur. The main con was the 8MB upload limit, which for a hackathon, especially a creative one where people are likely to upload videos, was not ideal.

Extra care was needed to prepare attendees for communicating with each other. There was a pre-event form which asked them whether they wanted to join as individuals, pre-formed teams, or randomised teams. No one took us up on the pre-formed teams option, which indicated to me that people were there to socialise as well as participate. I created channels for all the sub-topics you could think of, with hopes that people would find something suited to them, but in hindsight should have spent time to create thoughtful icebreakers to have people meet in a more structured setting.

Here are some ice-breaker suggestions that I found / came up with afterwards:

Regardless of the lack of an ice-breaker there were some really interesting conversations that occurred on the Discord server. Given the restricted upload limit (8MB), people simply shared resources they had found online, and followed tangents into their own interpretations of what the theme meant. No projects were built, but the community was still intact afterwards. And while most hackathons would need projects to be successful, my primary goal was around community-building, so this was a success in my eyes.

Now to speak about some of the You Got This team’s fave services!

Discord is a highly popular asynchronous messaging service. It’s got a clean UI and is super easy to use, making it a great service to start off with. It’s also compatible with many games, which when combined with the tech industry, makes it on-trend and actually fun to use (e.g being able to see which games your friends / colleagues are currently playing). You can also use / build bots to tailor and automate functions within your server!
When it comes to creating communal spaces, Discord hosts private servers which users must be invited to. These servers can be separated into “Categories”, which subsequently contain “Channels” (either text or voice). The creation of roles allows organisers to manage the scope of each channel, meaning that they can still organise and test the releasing of information, all within the same server!
As mentioned previously though, there is an 8MB file size upload limit (50MB if you pay, which is still pretty small), and isn’t great for a lot of creative collaborative work. Also, messages aren’t end-to-end encrypted (including both DMs and server messages).

Leading us on to Discord’s main competitor, Slack. Slack is strictly advertised as a “productivity at work” centred service. An advantage that Slack has is that there is a 1GB file upload limit, which is much better for collaborative work than Discord’s 8MB limit in the free plan, and even the 50MB limit in Discord’s Nitro plan. Also, Slack’s messages are end-to-end encrypted.
The disadvantages are that Slack doesn’t host voice-channels, only video conferencing, and even this is limited to only 2 people in their free plan. Slack has a storage limit, whereas Discord has unlimited storage, and the final point I’ll cover is that Slack has a 10,000 message history limit for their free plan, whereas Discord’s history limit is unlimited.
So, in my opinion it is fair to say that Discord is much better suited at facilitating and maintaining communities.

There are a million and one platforms and services that allow for video calls, but if you're wanting something a bit closer to a 'traditional' event, there's Remo. Remo displays virtual tables and seats that users are able to join, which is a much more accurate representation of in-person networking that the breakout rooms provided in the services mentioned in the last paragraph.

Remo is a paid service, however the team at Vonage has an account called the “Vonage Virtual Event Space”, where communities are able to apply to host their events for free. They can host up to 800 attendees as long as you give them at least two weeks notice (the more notice the better in securing your event), and so long as you have a Code of Conduct / follow theirs. To find out more, see https://dev.to/vonagedev/supporting-communities-to-go-online-d3o (image below taken from their site) 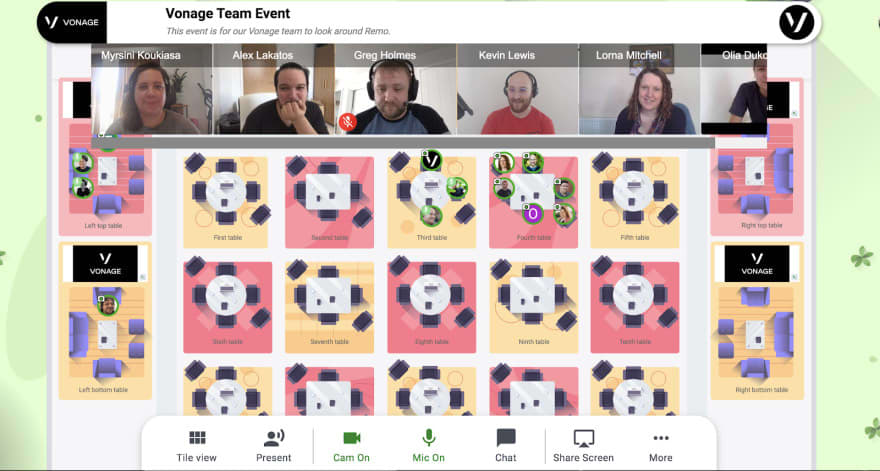 So, what would I do differently?

As time goes on, more and more services are being built to facilitate real-time interaction. I’d think about which services to use to chronologically provide the experiences that people would have in person, e.g, Remo for ice-breakers between groups, Discord for general chatter and development, and then Remo again for a final showcase.

This is my personal experience, and together with the experiences of my fellow You Got This organisers we're working to make You Got This From Your Couch as impactful as possible. We're still working out the details, but head to our site to get tickets on November 1st.

Thank you for reading, and I’d be happy to answer any questions you have on maintaining your online community! markela@yougotthis.io