An excellent cloud-native application design should declare any specific resource that it needs to operate correctly. Kubernetes uses those requirements to make the most efficient decisions to ensure maximum performance and availability of the application. Additionally, knowing the application requirements firsthand allows you to make cost-effective decisions regarding the hardware specifications of the cluster nodes.

In this post, we will explore the best practices to declare storate, CPU, and memory resources needs. We will also discuss how Kubernetes behaves if you don't specify some of these dependencies.

Let's explore the most common runtime requirement of an application: Persisten Storage. By default, any modifications made to the filesystem of a running container are lost when the container is restarted. Kubernetes provides two solutions to ensure that changes persist: èmptyDir and Persistent Volume (PV).

Using PV, you can store data that does not get deleted even if the whole Pod was terminated or restarted. There are several methods by which you can provision a backend storage to the cluster. It depends on the environment where the cluster is hosted (on-prem or in cloud-provider). In the following exercise, we use the host's disk as the PV backend storage. Provisioning storate using PVs involves two steps:

This definition creates a PV that uses the host disk as the backend storate. The volume is mounted on /tmp/data directory on the host. We need to crete this directory before applying the configuration

Now, we can create a PVC and avail it to our Pod to stora data through a mount point. The following definition file creates both PVC and a Pod that uses it.

Applyting this definiiton file creates the PVC followed by the Pod.

Any data that gets created or modified on /data inside the container will be persisted to the host's disk. You can check that by logging into the container, creating a file under /data, restarting the Pod and then ensuring the file still exists on the Pod. You can also notice that files created in /tmp/data are immediately available to the Pod and its containers.

If you are using the hostPort option, you are explicitly allowing the internal container port to be accessible from outside the host. A Pod that uses hostPort cannot have more than one replica on the same host because of port conflicts. If no node can provide the required the port, then the Pod using in the `hostPort option will never get scheduled. Additionally, this creates a one-to-one relationship between the Pod and its hosting node. So, in a cluster with four nodes, you can only have a maximum of four Pods that use the hostPort option.

Almost all application are designed so that they can be customized through variables. For example, MySQL needs at least the initial root credentials. Kubernetes provides configMaps for injecting variables to containers inside Pods and Secrets for supplying confidentaial variables like account credentials. Let's have a quick example on how to use configMaps to provision variables to a Pod:
`yml
kind: ConfigMap
apiVersion: v1
metadata:
name: myconfigmap
data:
# Configuration values can be set as key-value properties
dbhost: db.example.com 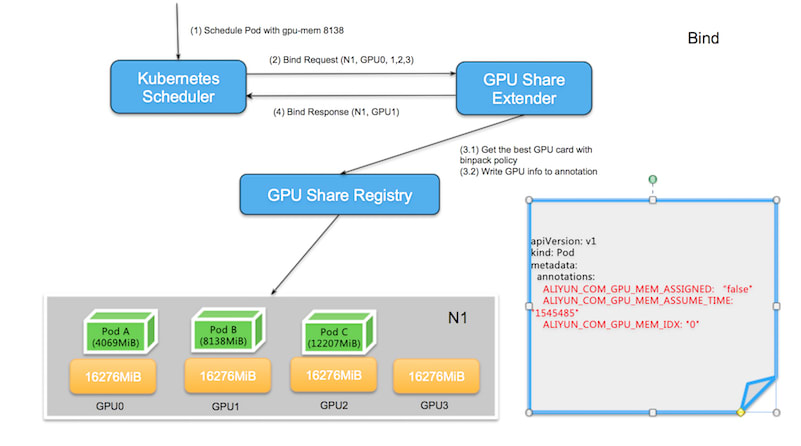 So far we discussed the different runtime dependencies that affect which node will the Pod get scheduled and the various prerequisities that must be availed for the Pod to function correctly. However, you must also take into consideration that capacity requirement of the container.

When designing an application, we need to be aware of the type of resources that this application may consume. Generally, resources can be classified into two main categories:

The distinction between both resources types is crucial for a good design. Kubernetes allows you to declare the amount of CPU and memory the Pod requires to function. There are two parameters that you can use for this declaration:

Let's have a quick example for a scenario application that needs at least 512 MB and 0.25% of a CPU core to run. The definition file for such a Pod may look like this:
`yml
kind: Pod
apiVersion: v1
metadata:
name: mypod
spec:
containers:

How Are the Resource Requests and Limits Calculated ?

Memory is calculated in bytes, but you are allowed to use units like Mi and Gi to specify the requested amount. Notice that you should not specify a memory limit that is higher than the amount of memory on your nodes. If you did, the Pod would never get scheduled. Additionally, since memory is a non-sharable resource as we discussed, if a container tried to request more memory than the limit, it will get killed. Pods that are created through a higher controller like a ReplicaSet or a Deployment have their containers restarted automatically when they crash or get terminated. Hence, it is always recommented that you create Pods through a contoller.

CPU is calculated through millicores. 1 core = 1000 millicores. So if you expect your container needs at least half a core to operate, you set the request to 500m. However, since CPU belongs to sharable resources when the container requests more CPU than the limit, it will not get terminated. Rather, the Kubelet throttles the container, which may negatively affect its performance. It is advised here that you use liveness and readiness probes to ensure that you application latency does not affect your business requirements.

What Happens When You (not) Specify Requests and Limits ?

Most of the Pod definitions examples ignore the requests and limits parameters. You are not strictly required to include them when designing your cluster. Adding or ignoring requests and limits affects the quality of service that the Pod receives as follows:

We can summarize how the Kubelet deals with Pod priority as follows:

Sometimes you may need to have more fine-grained control over which of your Pods get evicted first in the event of resources starvation. You can guarantee that a given Pod get evicted last if you set the request and limit to equal values. However, consider a scenario when you have two Pods, one hosting your core applicationa nd another hosting its database. You need those Pods to have the highest priority among other Pods that coexist with them. But you have an additional requirement: you want the application Pods to get evicted berfore the database ones do. Fortunately Kubernetes has a feature that addresses this need: Pod Priority and preemption. So, back to out example scenario, we need two high prority Pods, yet one of them is more important than the other. We start by creating a PriorityClass than a Pod that uses this PriorityClass:
`yml
apiVersion: scheduling.k8s.io/v1
kind: PriorityClass
metadata:
name: high-priority

When we have multiple Pods with Different PriorityClass values, the admission contoller starts by sorting Pods according to their priority. Highest priority Pods (those having the highest PriorityClass numbers) get scheduled first as long as no other constraints are preventing their scheduling.

Now, what happens if there are no nodes with available resources to schedule a high priority Pod? The scheduler will evict (preempt) lower priority Pods from the node to give enough room for the higher priority ones. The scheduler will continue lower-priority Pods until there is enough room to accommodate the more upper Pods. This feature helps you when you design the cluster so that you ensure that the highest priority Pods (ex. the core application and database) are never evicted unless no other option is possible. At the same time, they also get scheduled first.

You may be asking what happens when you use resources and limits (QoS) combined with the PriorityClass parameter. Do they overlap or override each other? Followings can be essential things to note when influencing the schedule decisions:

How to Add KMS to an Azure Kubernetes Service cluster

Once suspended, ylcnky will not be able to comment or publish posts until their suspension is removed.

Once unsuspended, ylcnky will be able to comment and publish posts again.

Once unpublished, all posts by ylcnky will become hidden and only accessible to themselves.

If ylcnky is not suspended, they can still re-publish their posts from their dashboard.