Ellis Parry-Nweye and Justin Wheeler have analyzed the AWS product Lightsail and provided their analysis here. The analysis was done by attempting to host a simple Java Spring Boot application on Lightsail Instances. These instances were fronted by a Lightsail Load Balancer. We leveraged Lightsail Object Storage to stage the jar file that we would deploy.
The described architecture could be created using standard AWS services like EC2 for the instances, ELB for the Load Balancing, and S3 for the Object Storage. However, Lightsail aims to provide a single interface to provide the same functionality more simply.

Lightsail even includes simpler variants of other AWS services not analyzed in the current project to keep the original analysis lightweight.

The conclusions that were drawn from the project were as follows:

The process to create an instance was plain and simple. The configuration options seemed lacking compared to the overwhelming number of those given within the EC2 console. There is even an option to create multiple instances in a single shot by modifying the quantity input box. Surprisingly the console requires an Availability Zone selection meaning that the bulk creation can only create multiple instances within a single AZ. That logic goes against AWS best practices and will hurt the architecture's high availability/fault tolerance. 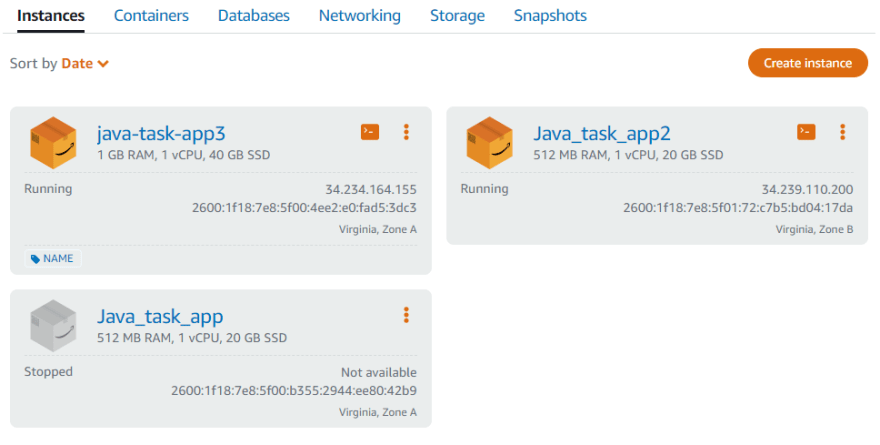 One nice benefit of Lightsail instances is that they offer pre-configured click-to-launch applications and stacks that can drastically benefit teams using those services. Some of the popular offerings include WordPress and a LAMP stack. This feature was not explored during the project, perhaps only because a Java solution was not available. Albeit Java is not hard to configure either. The Amazon Linux OS option was selected, and amazon-linux-extras was used to install the required software. 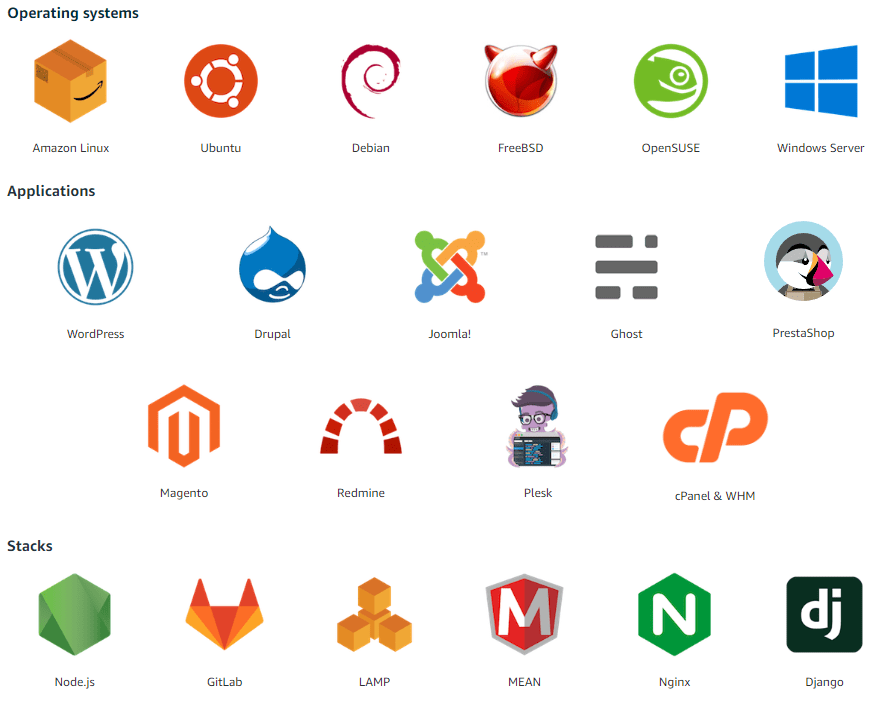 Every Lightsail instance comes with a built-in firewall relatable to a security group in EC2. HTTP and SSH are permitted by default, which doesn't feel very secure. Since this project did not require HTTPS, these default rules were suitable. Along with the firewall, a public IP and private IP can be found on the networking tab of the console. Interestingly a VPC did not have to be created. The assumption is that Lightsail is leveraging VPCs within an AWS-owned account. 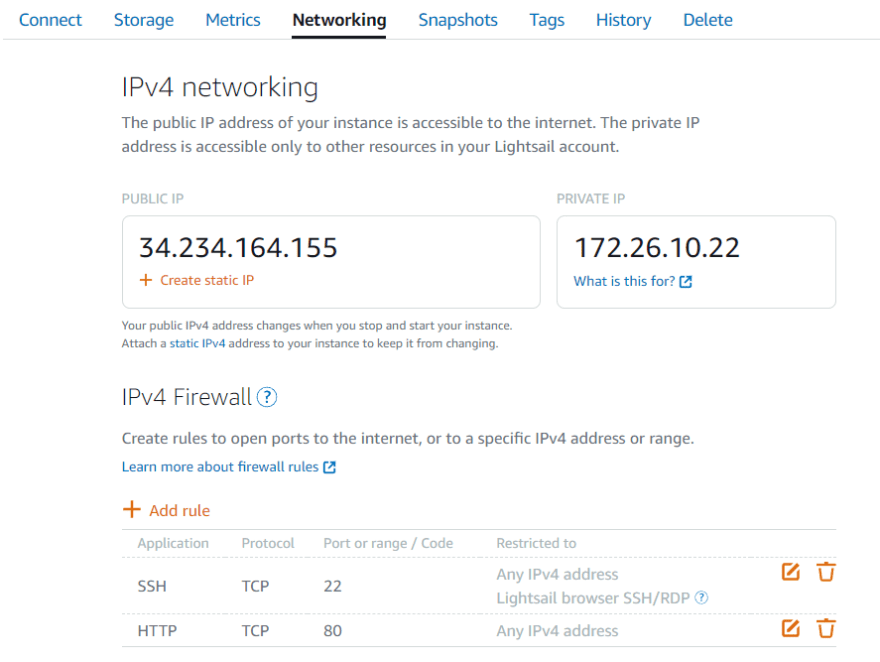 Moving on, Lightsail makes creating snapshots easy. These snapshots are a helpful backup tool but are required to resize the instance as well. An insufficient instance was launched for the first attempt that had to be resized to cope with the Java Spring Boot application's requirements. That discovery only occurred after the instance was bootstrapped. Unlike EC2, you will need to snapshot the instance and then launch a brand-new instance from that snapshot if you would like to scale up. Other helpful options were noted, such as the ability to copy to another region or even export the snapshot to EC2.

Some final notes of importance are:

For an instance, the Load Balancer was easy to create. Unlike the Elastic Load Balancing service, the Lightsail Load Balancer does not require Target Groups to be made, even if they may be used behind the scenes. The LB provides a DNS name that can be used out of the box. HTTP is enabled by default with the option to allow HTTPS if you conduct a couple of extra steps. That wasn't done since HTTP was sufficient for the use case.

Unfortunately, it was impossible to disable HTTP, and there was no option to redirect HTTP to HTTPS like many services offer. This functionality is available for CloudFront and the ELB service, so, oddly, it was not included here. Further analysis uncovered additional features like session persistence that could be enabled with a simple checkbox. Overall, the Lightsail Load Balancer provided the required functionality with ease and without the bells and whistles that could overwhelm. 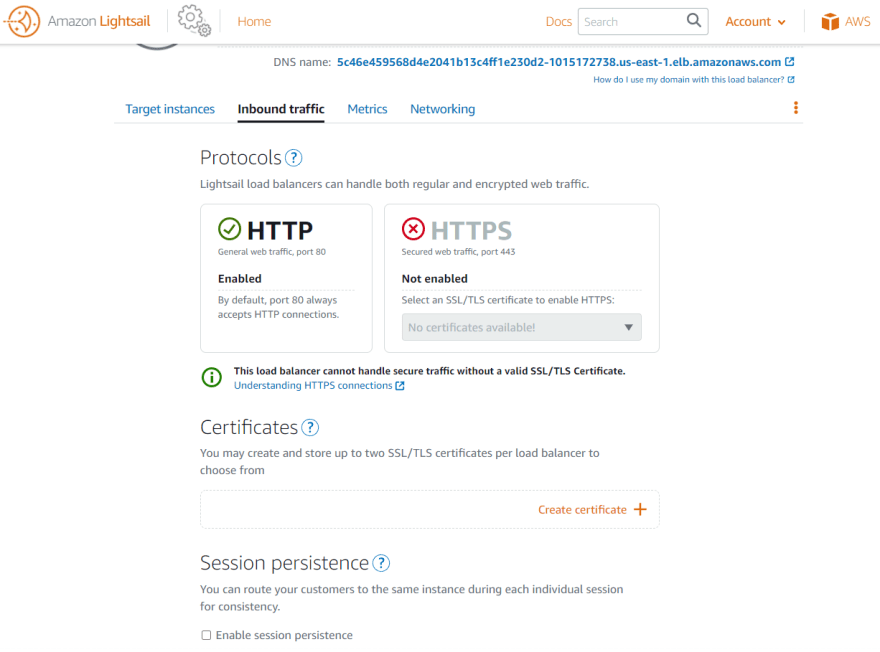 Object storage was not used that much during the experiment. It was primarily used to stage the jar file required to run the Java Spring Boot application. It's no surprise that creating a bucket was easy. The domain name is provided when the storage is made s3. This means that S3 is used to support Lightsail Object Storage.

Although, there were crucial differences. Upon creation, a user must choose a bundle that matches the storage and transfer they expect. This is probably to simplify the billing, yet it could mean that Lightsail Object Storage could be more expensive than S3 if you over-provision. Alternatively, if you under-provision, then overage fees per GB apply.

Finally, a good number of features exist for the service, like permission management, metrics, versioning, and logging. These are a subset of what is offered by S3 and are likely very similar. Except most of these were not explored too much during the exercise. Permissions default to least privilege, again like S3. The instances that needed access to the files had to be granted access deliberately. The S3 CLI worked against the bucket when connecting from a Lightsail instance but connecting from outside Lightsail did not work. An invisible barrier separates the Lightsail Object Storage buckets from the S3 buck. There was the discovery of a migration path to S3 if the Lightsail feature set was outgrown. 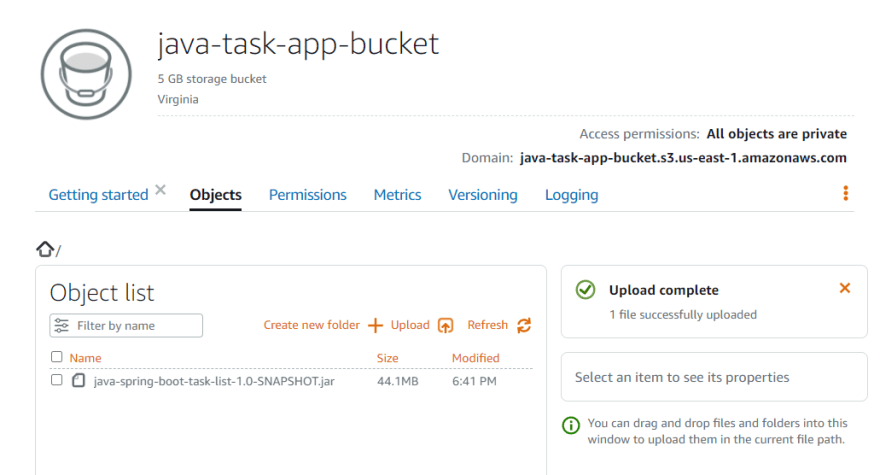 In conclusion, Lightsail is an excellent service for the right people. It can be thought of as "AWS Easy Mode" as the features and configuration options will surely not overwhelm. The centralized console is polished without the pesky need to remember a hundred acronyms. The pricing is clear, which makes budgeting and planning a breeze. Lightsail offers migration paths that can be followed if the customer ever requires something more without starting over.

To elaborate on “the right people” since it may be broad. The people that would benefit the most from Lightsail would be:

Data Engineering Should Not Be A Problem For BI Analysts

Once suspended, wheelerswebservices will not be able to comment or publish posts until their suspension is removed.

Once unsuspended, wheelerswebservices will be able to comment and publish posts again.

Once unpublished, all posts by wheelerswebservices will become hidden and only accessible to themselves.

If wheelerswebservices is not suspended, they can still re-publish their posts from their dashboard.