It's International Women's Day, and I'm thinking about Grace Hopper.

Grace Hopper was an amazing lady who did great things. She envisioned and helped create programming languages that translate English terms into machine code. She persevered in her intention to join the US Navy from the time she was rejected at 34 years old, to being sworn in to the US Navy Reserve three years later, to retiring with the rank of commander at age 60... then was recalled (twice) and promoted to the rank of captain at the age of 67. She advocated for distributed networks and developed computer testing standards we use today, among other achievements too numerous to list here.

By my read, throughout her life, she kept her focus on her work. She did great things because she could do them, and felt some duty to do them. Her work speaks for itself.

I recently came across a sizeable rock denoting a rather small, quiet park. It looks like this: 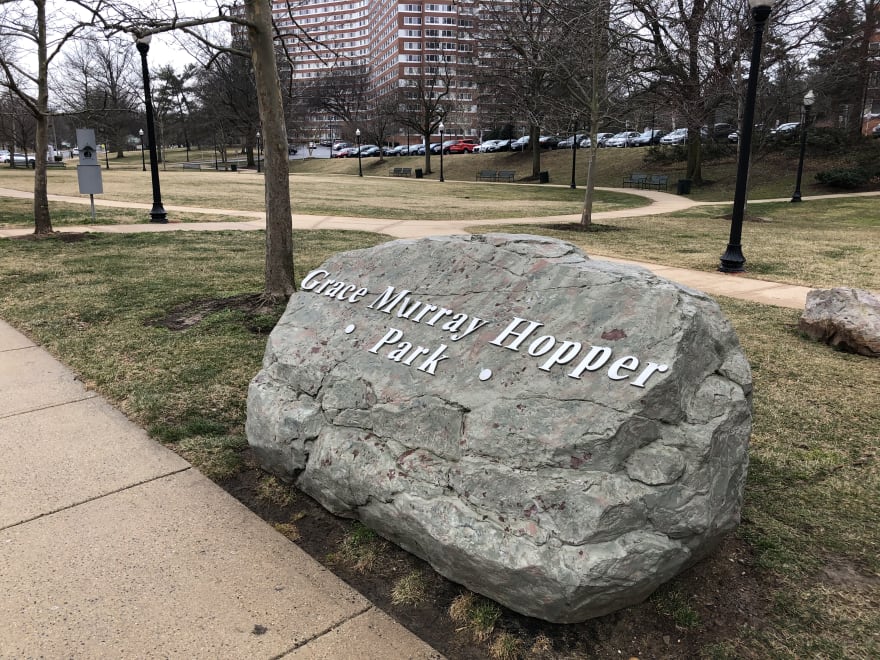 When I first saw this park, I thought it in no way did this great lady justice. But upon some reflection, its lack of assumption and grandeur grew on me. And today, it drew to the forefront something that's been on my mind.

I try and contribute regularly to the wide world of technology, usually through building things, writing, and mentorship. I sometimes get asked to participate in female-focused tech events. I hear things like, "too few developers are women," or "we need more women in blockchain," or "we need more female coders."

For some time I haven't been sure how to respond, because while my answer isn't "yes," it's not exactly "no," either. It's really, "no, because..." and it's because I'm afraid. I'm afraid of misrepresenting myself, my values, and my goals.

Discrimination and racism are real things. They exist in the minds and attitudes of a very small percentage of very loud people, as they always will. These people aren't, however, the majority. They are small.

I think that on the infrequent occasions when we encounter these people, we should do our best to lead by example. We should have open minds, tell our stories, listen to theirs. Try and learn something. That's all.

When I present myself, I don't point out that I'm a woman. I don't align myself with "women in tech" or seek to represent them. I don't go to women-only meetings or support organizations that discriminate against men, or anyone at all. It's not because I'm insecure as a woman, or ashamed that I'm a woman, or some other inflammatory adjective that lately shows up in conjunction with being female. It's because I've no reason to point out my gender, any more than needing to point out that my hair is black, or that I'm short. It's obvious and simultaneously irrelevant.

When I identify with a group, I talk about the go-getters who wake up at 0500 every day and go work out - no matter the weather, or whether they feel like it. I tell stories about the people I met in different countries around the world, who left home, struck out on their own, and had an adventure, because they saw value in the experience. I identify with people who constantly build things, try things, design and make things, and then share those things with the world, because they love to do so. This is how I see myself. This is what matters to me.

Like the unassuming park named after an amazing woman, when truly great things are done, they are done relatively quietly. Not done for the fanfare of announcing them to the world, but for the love of the thing itself. So go do great things, please. The world still needs them.

How did you feel after your first open source PR?

A thread discussing the sensation of contribution to open-source.

Persisting Past Dissonance: Adapting to the Identity of a Female Developer

What Did You Learn From Pair Programming

Shine Theory and the Berlin Community at JSConf EU