The story was originally posted on Vectorly blog.

What should a manager understand about the productivity of knowledge workers?

In the era of digital transformation, the approach to developer productivity measurement of employees should be reconsidered.

As long as we’re talking about traditional production processes, a productivity metric is quite simple: how many units of a particular quality product are produced and at what cost? For intellectual work, it’s much more tricky. For an author, scientist or engineer, these metrics won’t work.

Knowledge work fundamentally differs from manual work. So, a manager should use a different approach when measuring the productivity of knowledge workers, and, hence, consider factors besides the simple output/input ratio.

This problem especially concerns the tech industry, since lots of engineering managers still measure developer productivity by the number of lines of code, which is absolutely irrelevant today. Just like measuring productivity with a single metric, such as commit count, issues resolved, code churn and others, it can give a manager the wrong impression and lead to incorrect decisions.

The right strategy is to use a complex approach when measuring developer productivity and take into account all the factors that influence it.

In this article, you will find a complete list of these factors and a guide on how to boost team performance.

There are a lot of factors that influence developers’ productivity, so it's important for an engineering manager to consider them all when measuring it.

Why? It gives a manager the chance to avoid radical decisions, like firing employees who do not meet the metrics, and the opportunity to find the real reason behind the low productivity of their developers. Additionally, it can help them develop strategies for increasing team performance.

We have gathered a complete list of factors that influence developer productivity and divided them into three main groups:

You can see them in the picture below. 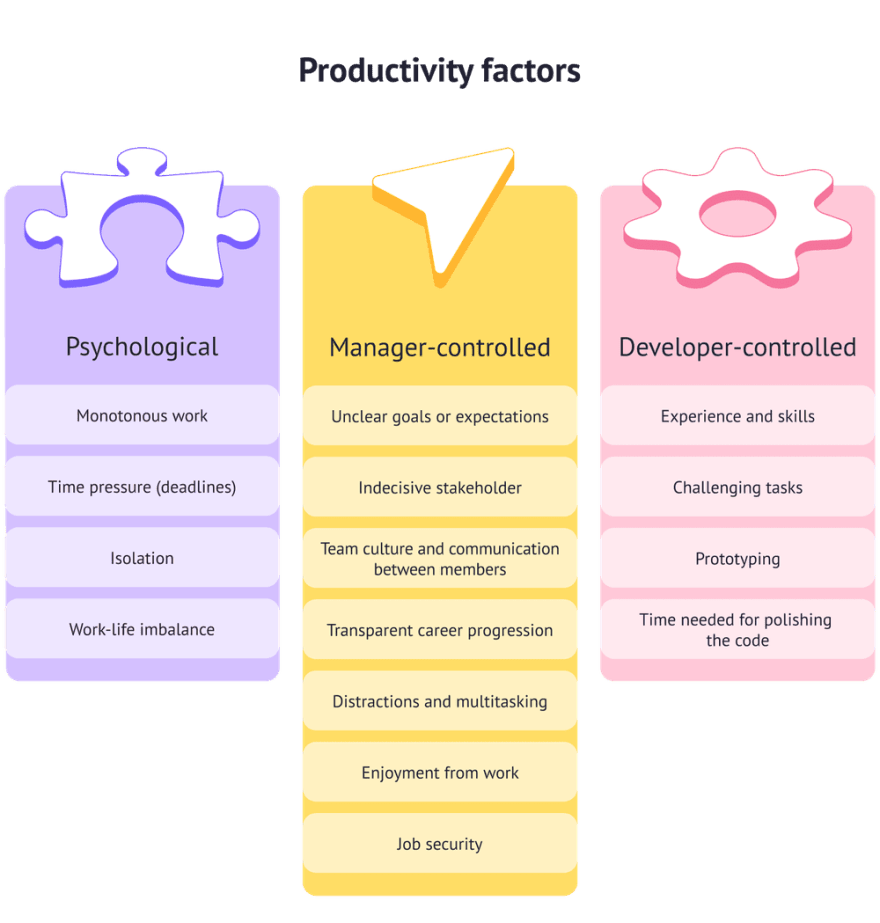 We might believe that happiness is a personal matter that developers must deal with on their own time. By this logic, tech companies should focus on maximizing the output they get from each developer. However, we must first invest in an employee, in order to receive productive output from them.

The productivity of software developers is determined by their skills and expertise, but in order to gain access to these, we must first create favorable conditions that allow human potential to be realized.

A recent study shows the level of developers’ happiness directly influences their productivity and the quality of their code. Moreover, engineers reported a variety of consequences of being unhappy:

What makes developers unhappy? Here is a list of psychological factors that can reduce developer happiness, so it's important for a manager to pay attention to them:

Let’s take a closer look at these psychological factors and what a manager can do to improve the situation.

Engineers tend to choose their job due to its creativeness and the challenging tasks it can offer. Yet the reality is that most developers have to spend hours monotonously writing code, reviewing it, copying snippets, etc.

Every day, tasks are repeated or have little variation, which reduces the employee's interest. If a developer doesn’t feel that they’re getting better in their professional area, they get distracted, and postpone tasks for later. This negatively affects productivity.

Working to strict deadlines is stressful. Often, developers manage their own time and do not have a fixed schedule.

As a result, developers have to achieve a high level of self-control and time management. If an employee doesn’t cope, he/she feels a strong time pressure day by day, which leads to burnout and negative attitudes towards work.

The productivity of such a developer tends towards zero.

Most engineers in tech companies are working remotely today.

Of course, this format does not exclude calls with colleagues, discussing tasks online, and even out-of-office communication. But one way or another, the employee is in isolation. The lack of a team nearby, which boosts and energizes, affects the level of developer inspiration. The quality of work suffers.

Due to unmanageable workload and multitasking, a developer may feel the work-life balance suffers. The employee gets the feeling that he/she is constantly at work, because most of their life is spent in front of the monitor.

This leads to overload, fatigue, irritation, which negatively affects the resulting work.

Be attentive to your employees and monitor the atmosphere and the mood of your team. How?

Read about the five stages of burnout. It will help you to catch the early signs of developer burnout and prevent the consequences mentioned above.

Second, regular one-on-one meetings are a great tool to monitor how your employees are feeling and what problems they are experiencing at their workplace.

If you run 1 on 1 meetings right, lots of issues can be spotted and solved at an early stage. To help you hold effective one-on-ones, use ready templates for every occasion.

In this part, we’ll talk about productivity factors associated with the personal skills of an engineer, their attitude to tasks, the level of their self-control and their desire to strive for excellence.

Here is a list of developer-controlled factors that influence their productivity:

Let's consider how developers can influence productivity and how a manager can help them along this difficult path.

The lack of relevant and up-to-date skills can dramatically decrease a developer’s speed in completing tasks and their overall performance as a result. In today's reality, it’s a part of a developer’s job in IT to constantly improve their skills and obtain new knowledge all the time, since everything is changing rapidly.

Global tasks and complex problems challenge the developer and contribute to his or her high involvement, so they have a desire to cope at all costs.

Complex, unusual tasks are more interesting to solve than routine small tasks that are repeated every day.

Companies are able to capitalize on products that were prototyped early on. Thanks to prototyping, the developer has less new material to come up with and fewer decisions to make along the way.

Productivity will be better if they follow a clear plan.

Time needed for polishing the code

Developers need time to check and refine their code. The polishing process can seem quick and insignificant, and is often not even included in the project plan.

However, at this iteration, a specialist can bring the code close to perfection. Allowing time for polishing is the key to a successful project.

Here you might think that, a priori, the employee either has a high level of these factors or not. However, it is important to understand that the role of the manager is also very important here.

Of course, the factors stated above are ultimately the responsibility of a developer. But a great manager can play an important role here to increase developers’ productivity:

Use ready-to-use skills matrices templates for 50+ roles to find the skill gaps of your dev team.

Then build a development program for each employee and organize mentorship programs.

1 on 1 discussion on workload with an employee can really help. A private conversation will help to highlight challenges they are facing and offer a better solution or reconsider the tasks.

It’s not only developers who carry full responsibility for their performance at the company. Employees often face difficulties at their workplace that distract them from their tasks and make it impossible for them to work effectively.

Here are some important points that a manager should be aware of:

Unlike with the developer-controlled factors, the manager's task, in this case, is to determine which of these factors is inhibiting the productivity of the team and directly influence them to increase the productivity.

Let's consider each of these factors in more detail.

Unclear requirements will force the developer to contact the manager with clarifying questions about the project. So, it is better to draw up a clear technical task list at the stage of planning the project iterations.

Highlighting the key goals of the project will not only contribute to faster and better work, but also motivate the developer to achieve a specific result that is useful to the business and which the developer can put into a portfolio with pleasure.

Indecision of stakeholders at all stages of the project leads to delays and often leads to a situation where the project stalls.

Teach developers to push tasks forward and not stop if they don't know what to do. There are always people who can help. Tackling difficult issues together is useful.

Team culture and communication between members

Companionship means a social and friendly atmosphere in which team members not only communicate but also help each other and give constructive feedback.

Well-built communication in the team and clear processes in the interaction of employees also significantly improve productivity.

In addition, developers need to be aware that they can take risks and share personal information, and be confident that teammates will treat these overtures with respect and kindness.

Sense of eliteness is an important factor. If the team believes they are the best engineers, always creating the highest quality software, they are more likely to go out of their way to actually achieve it. Also, important factors are support for innovation, team cohesion, team identity and low turnover.

When an employee clearly understands what he or she needs to do and what goals to achieve in order to get a promotion, they are motivated to improve their performance.

With a growth plan, developers will understand why they need to show good results.

If you require engineers to be ready to multitask, be prepared that this will lead to a situation in which employees are constantly distracted, shifting their attention from one thing to the other.

The quality of the performance of each task will deteriorate because the brain is able to concentrate on just one thing at a time.

For many engineers, programming was at first a hobby, and only then it was transformed into a full-fledged job.

Therefore, developers have the potential for high productivity, which is supported by intrinsic motivation and a sincere interest in the work.

They are even willing to stay at work during extra hours, simply because they enjoy what they do. As a project manager, you can support developers in wanting to dive into the project over and above their working hours, but make sure that the engineers don't get exhausted.

This factor requires that employees have confidence that they are appreciated at work, have a stable salary and will not be fired. Job security is a must for many engineers.

And in a situation where they feel unsafe, namely, when their skill may be greatly needed today but not tomorrow, it does not allow them to reveal their potential and show all their skills in practice.

Before measuring developers’ productivity, make sure you have considered all the factors that are the responsibility of a manager:

Show your team members career choices to increase productivity and engagement. As well as identify skills required for promotion.

You can also discuss the situation in the company and their personal problem to make them included.

The story was originally posted on Vectorly blog.

The importance of good Documentation

15 Ways to Kick Burnout in the Butt