Unless you have been living under a rock, you would have come across the term Web3, through a blog post, news articles, or some other source. Trust me, Web3 has been shaking the internet as it exists today.

Web3 is the culmination of a vision of serverless internet, the decentralized web. An internet where users are in control of their own data, identity, and destiny.

This article focuses on the Interaction Layer, specifically in relation to EVM based Blockchains.

Reason: Cause you are starting out on the Web3 development cycle and you need to know as why is the layer 1important, who provides that service, do I need it, etc etc

There are 2 approaches to work with the interaction layer:

As you would have already guessed, there are pros and cons to both the options. 90% of the dapp development happens using the option 2; but without much analysis into this subject.

The objective of this article is to let you know of the pros and cons and then to help you make a decision on should follow the herd or break free.

To understand it in a better manner, the following table consists of some of the most popular node providers and their features. 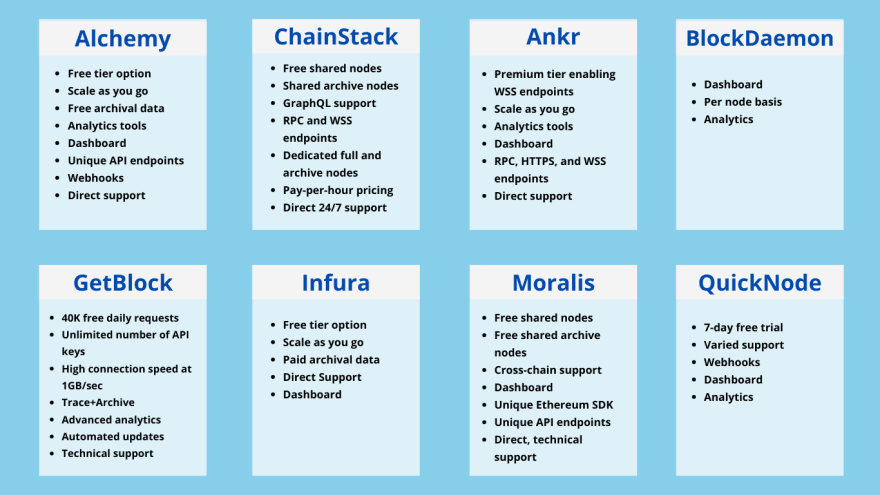 For more information, check out this page

Pros of Using the above mentioned service providers

OPTION 2 :Running Your Own Node.

By running our own Node we mean that your server stores the entire blockchain. You may choose whether your Node should validate every block of data before adding it to the blockchain (yes yes, we are talking about mining, proof of work when it comes to Ethereum Blockchain).

Although, running own node can be considered good practice but is not recommended due to its cost and time taken for the installation process.

There exist multiple clients on the internet that allow you to run their own Node based on various programming languages like Go, Rust, Typescript, etc. 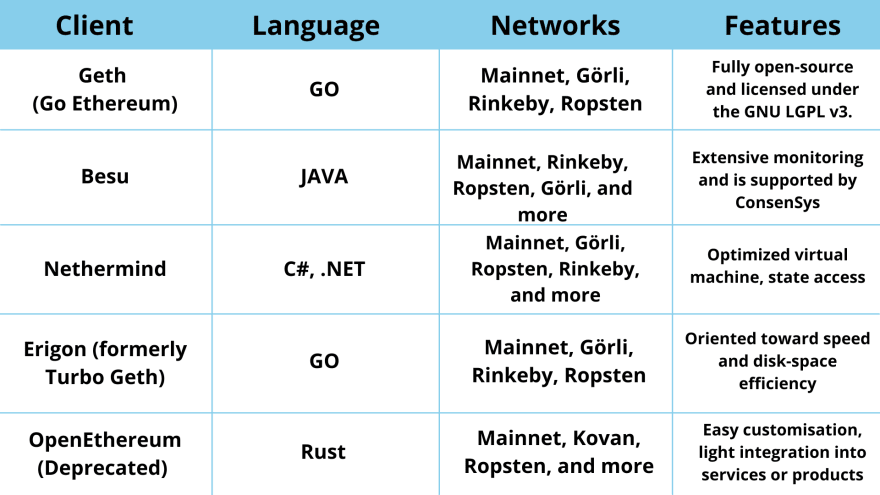 Pros of Using the above mentioned service providers

Lets talk about the Costs (financial and then the time costs)

Providers like Infura and Alchemy provide a free tier to use their services. Obviously, there are limits to the number of API calls that you can make under the “Free Tier”. Currently, Infura permits 100,000 requests per day in the free tier, while Alchemy permits 300 Million requests.

Of course, the above-mentioned numbers are not small numbers, should be doing any form of initial stage development; testing; tutorials etc. But as soon as you go live with the a DAPP, which will easily bust the above limits, you are sitting with costs from Infura / Alchemy.

Now there is a lot of structuring involved. For eg, if we are designing a DAPP, we do not make our API endpoints public and hence, when our users connect to our DAPP, their wallet connects to a service provider. Hence, do not fret the above numbers straight away.

However, on average, we have witnessed that if you are maintaining a backend to analyse your smart contract data, performance and various other factors, you are definitely looking at ~$200 costs per month.

Costs of running your own node

Hardware requirements to run your own node:

On an average, based on the above requirements, we understand that it costs roughly ~600$ a month

It would typically require one of your engineers to least spend 30 mins each day just to monitor the performance of the node; we are also expecting a here and there break-down and hence, more time involvement. This will cost us ~24 hours a month, ie, ~ $1,200 per month.

Using a service provider can ease out the process and cut the whole time-consuming instructions. Nonetheless, reliability and some other factors do make the case for running your own node worth considering.

There you go! Now you have the pros and cons. It is, probably, now obvious why majority of the dapp developers in the world choose 3rd party service providers.

However, you need to understand that both of the approaches play a major role individually, and it only you who can determine which approach suits you best.

We would love to know your thoughts; we are open to learn and hence if you think we have missed out anything; more than happy to know.

How to Deploy an ERC-721 Smart Contract to Avalanche and Mint an NFT with Ankr, Hardhat, and Ethers.js 🔺

Once suspended, uv-labs will not be able to comment or publish posts until their suspension is removed.

Once unsuspended, uv-labs will be able to comment and publish posts again.

Once unpublished, all posts by uv-labs will become hidden and only accessible to themselves.

If uv-labs is not suspended, they can still re-publish their posts from their dashboard.