In the previous article, we understood how we can implement a swap between tokens using Uniswap.

In this article, we will be moving one level ahead by exploring Flash Swap by coding a flash swap contract and run tests on it!

We highly recommend you go through the previous article before.

What is a Flash Loan?

Unlike Traditional Loans, in Flash Loans, funds are borrowed and returned in one transaction. This is a MUST.

In Defi, traders (usually through bots) keep looking out for arbitrage opportunities to gain benefits by trading between platforms supplying different prices for the same asset.

This is where the Flash Loans comes into the picture (albeit usually).

With the help of Flash Loan, traders can borrow a large sum of money to execute an arbitrage trade.

How does Flash Loan Arbitrage work? 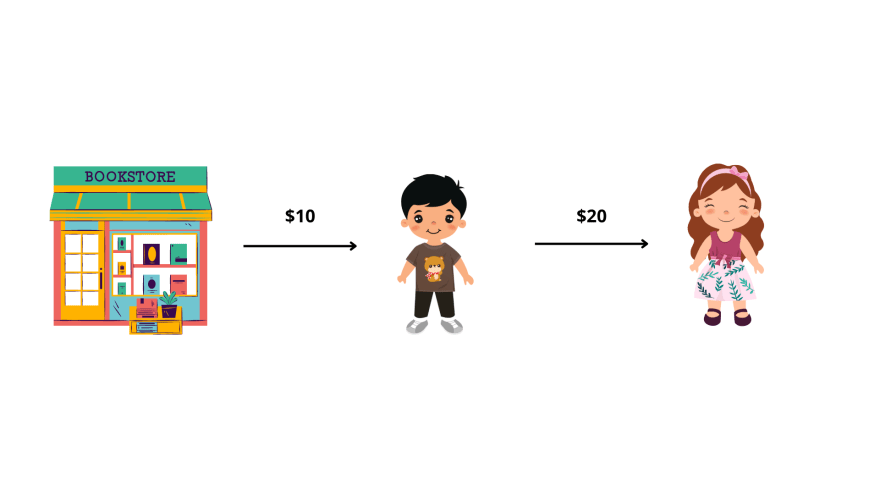 This is exactly how trading arbitrage works.

But unlike Ethan, who used his own money for buying the book from the bookstore, here we could simply use Flash Loans to borrow $10 and then execute a trade, similar to selling the book and then repay the loan (yes, all in 1 single transaction).

Lets dive in coding our own Flash swap contract and test it out!! 😎

1. Create a project and install dependencies

Use the following commands on your CLI to initialize your project.

Now, install the required dependencies that we’ll be using for the project.

Use the command provided below and run it on your CLI to install them.

Run the command npx hardhat on your CLI and create an empty hardhat config file, since we’re going to build everything from scratch.

Because we are going to fork the mainnet to test the Flashswap. Therefore, your hardhat config should look something similar to this: 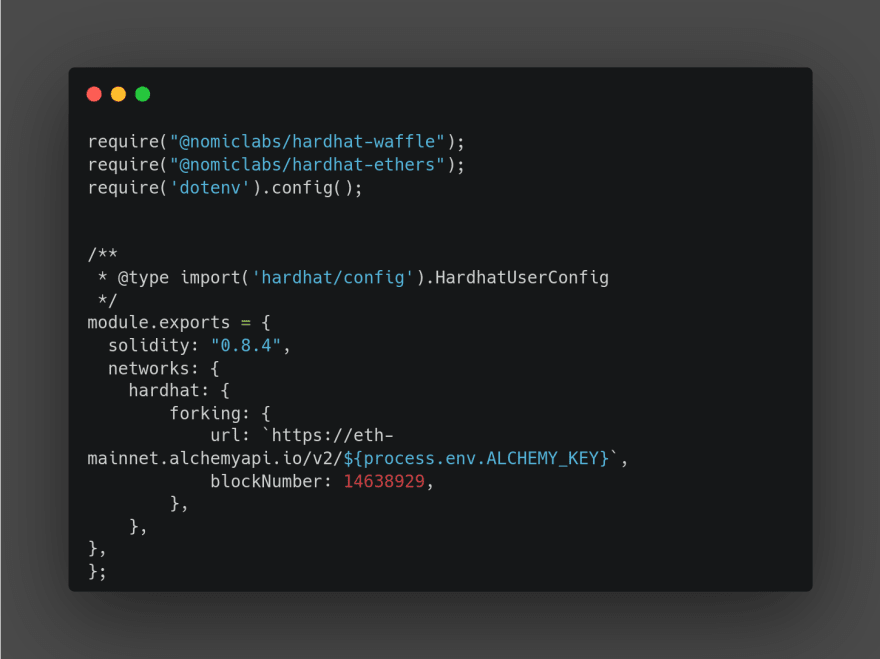 Note: Replace the <key> component of the URL with your personal Alchemy API key.

Also, if you’re new to mainnet forking, read our article based on it and then follow along with this article.

Create directories for contracts and tests for better code organisation.

Use the following code in your CLI.

In order to write the flash swap contract, create a file inside the contracts directory and name it flashswap.sol

First, import the interfaces required and create a contract named as flashSwap.

We will import Uniswap’s interface to use its functions. You can get the interface using this link.

It should look similar to this: 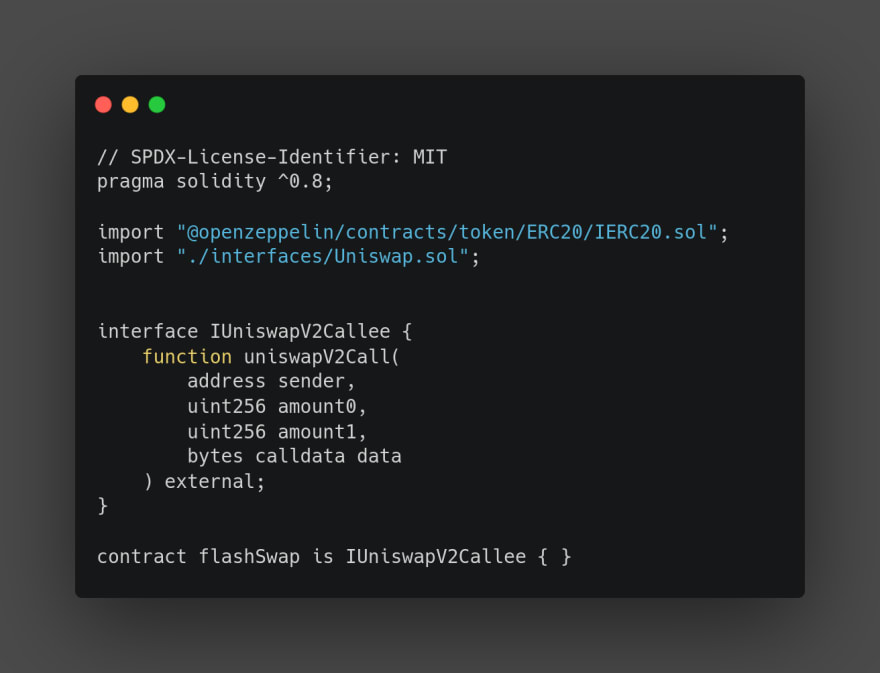 This contract will have 2 functions:

This function will take 2 parameters (A) the token that is to be borrowed from Uniswap {the address| and (B) the amount we want to borrow.

{Please note, we have defined WETH as a variable in our contract already. Please refer to our entire contract at the end}

Inside the UniswapV2Pair, we have 2 tokens, token0, and token1.

We now will check if _tokenBorrow is equal to _token0 or not.

If the values are equal, then amount0Out will be the _amount argument that we pass to the function, otherwise, it would be equal to zero.

Similarly, we will check the same for _token1.

As a result, either you’ll have amount0Out equal to _amount and amount1Out equal to 0 or vice-versa.

Then we pass these amount values in Uniswap’s swap function.

As you’ll notice, this is the exact same function that we call to perform a simple swap on Uniswap. Refer to our previous article over here.

The only difference is the last input. If it is empty, then Uniswap will try a simple swap execution.

If it is not empty, that is it has any data, then it would trigger a flashswap.

To pass in the input, we will encode the tokenBorrow and amount as bytes and then pass it to the swap function.

The testFlashSwap function should look similar to: 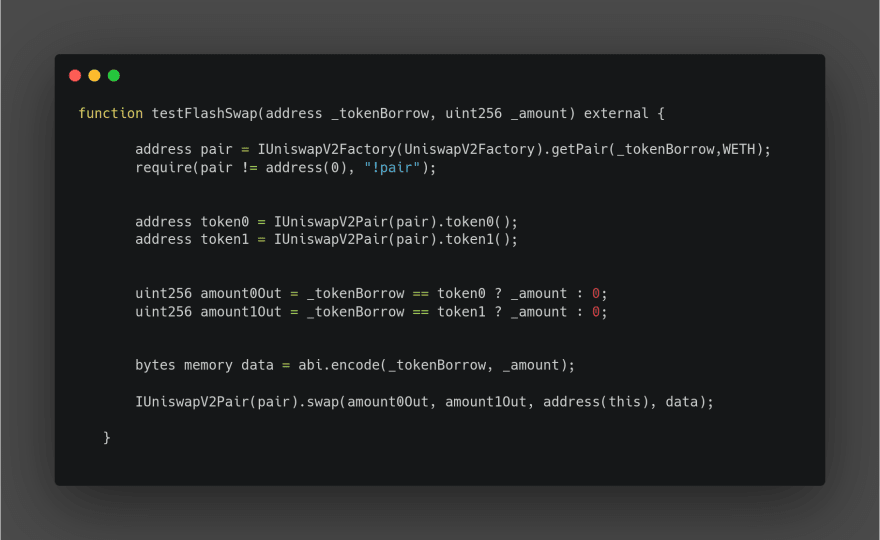 That completes our uniswapV2Call function, which would look similar to the following image: 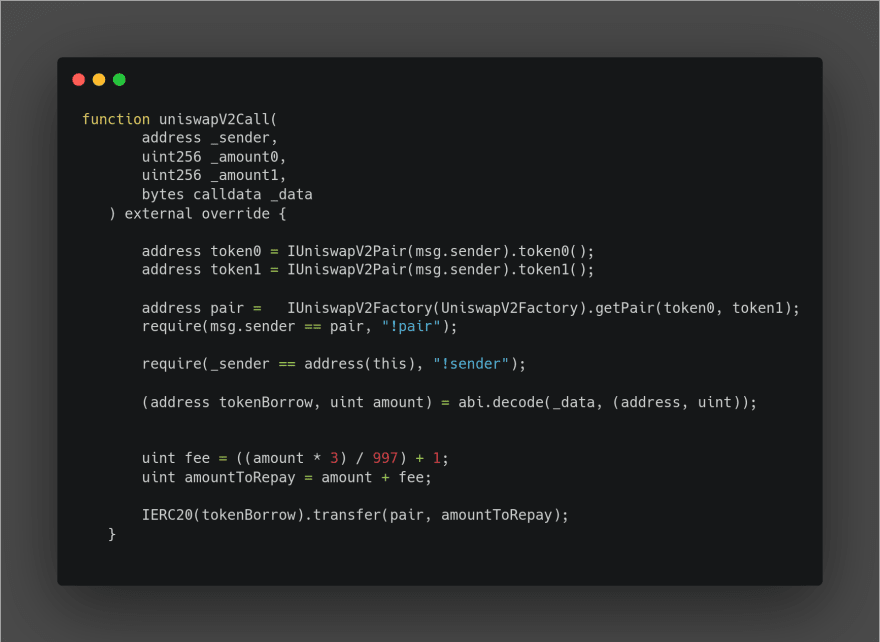 Now, our flashSwap contract is complete, and should be similar to this: 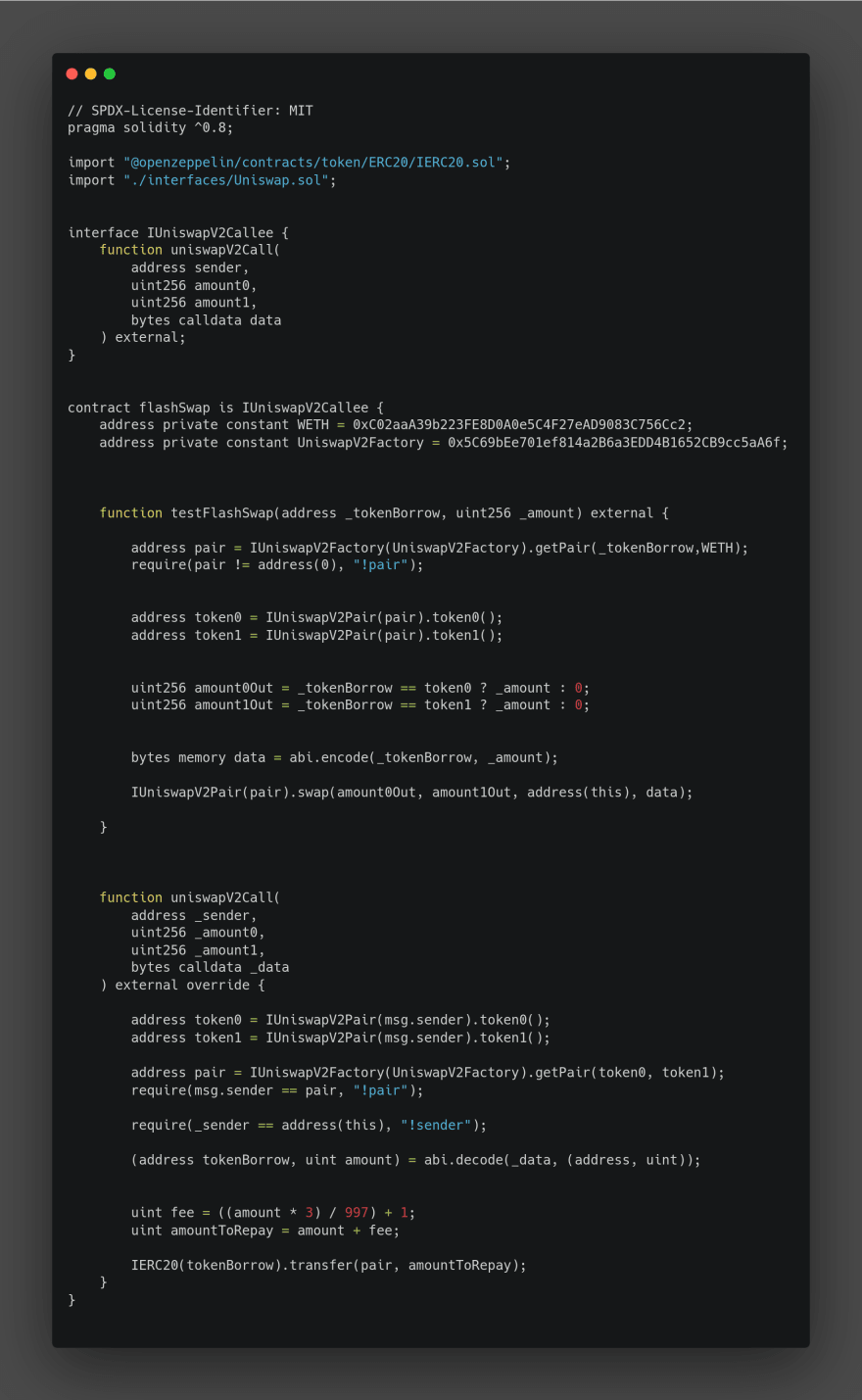 4. Let’s write some Test Script for our Contract

First of all, we will import the necessary libraries, ERC20 abi, and will also create a basic structure of our test script.

Use the following reference to get a better understanding:

We will also define the amount that we’re going to borrow.

A: First, we will impersonate the account which we want to use:

B: Then, we will define the USDC Contract

C: We already knew that Uniswap charges a fee to implement a Flash Swap. Therefore, we will calculate the value of the fee.

D: We need to understand that, since our contract just got deployed in the before block, it does not have any Ether or any USDC. Then, once the flash loan is implemented, the contract has to return the borrowed amount plus the fee.

Therefore, we have to transfer the amount of the fee from the impersonated account to our contract, in order to complete the trade.

Therefore, we will use the following command to transfer the fee to the contract:

D: Then, we will call the testFlashSwap function which we have defined in our contract.

E: It’s time to check whether the Flashswap executed was correct or not. For that, we will check whether the balance of our contract, after the flashswap and the payment of the exact fee that we computed is 0, as it should be, or not. 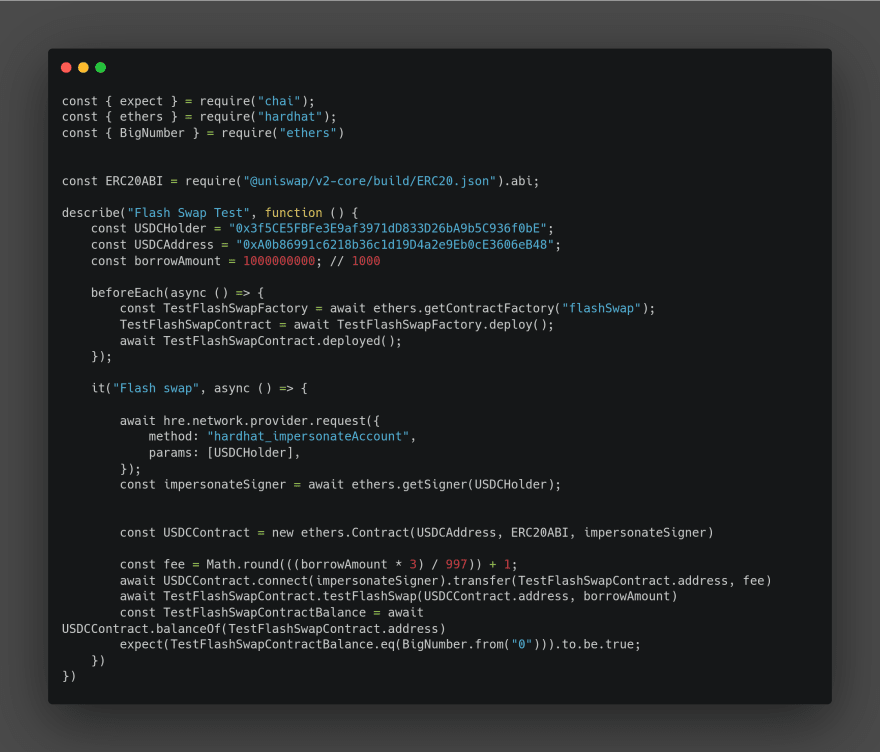 Flash swap allows you to borrow any ERC20 token on Uniswap and execute any code logic, as long as you repay the same token or any other token of the same value plus the fee in the same transaction.

Hope you like our efforts and try and run this by yourselfs. :)

Of course! If you get any error, you can ask us by tagging @uv_labs on Twitter.

Again, all the code that we just ran through is over here 👉 Github repository. Do give us a star if you liked our work.

What are dApps? How they are different from normal apps?

Once suspended, uv-labs will not be able to comment or publish posts until their suspension is removed.

Once unsuspended, uv-labs will be able to comment and publish posts again.

Once unpublished, all posts by uv-labs will become hidden and only accessible to themselves.

If uv-labs is not suspended, they can still re-publish their posts from their dashboard.