As an entrepreneur creating a startup, you should know about the potential benefits that Minimum Viable Product (MVP) development can bring. Custom MVP development can be an excellent way of bringing a product to market in an affordable manner.

MVP development for startups involves creating a product that has only basic viable features. This product is then released to a selected audience so that it can be tested. The startup then makes use of the feedback provided in order to develop the product. In some cases, it may make more sense to re-invent a product altogether. Before using the Minimum Viable Product system in your startup, it helps to understand the process and its benefits. Doing so gives you a better chance of creating an ideal MVP for your startup.

What is an MVP?

An MVP is a product that has enough basic elements to be released to a group of early adopters. This group of users is encouraged to provide feedback. Only after received feedback, further developments to the product are considered.

The concept of Minimum Viable Product development was popularized by Eric Ries in 2009. He described it in his book "The Lean Startup".

Using MVP development for your startup allows you to release a product to market in the quickest possible time frame. You also get to receive valuable insight concerning what works and what does not work about the product.

What are the benefits of an MVP?

If you like the idea of MVP development, you want to know what benefits you can expect. Having this information helps you to decide if creating an MVP is a good idea.

In basic terms, MVP development enables you to greenlight a product before you put it into full development and production. You can iron out any problems and make suggested amendments before the product becomes fully available on the open market. Several benefits come with this ability.

● Ensuring that the product you are investing in is a viable one.

● Establishing that the product is one that has enough appeal to be successful.

● Engaging an initial client base and good initial word of mouth.

You can see that Minimum Viable Product development can have several benefits for your startup. But, what do you need to consider if you are thinking about producing an MVP? Here are some of the things that you should and should not do, during custom MVP development.

What you should do

There are certain things that you should always do when you are developing an MVP. They can help make sure that the process is successful.

● Make sure that the product which is released is not crude. You need to make sure that all the essential basic features are included from the start. If this does not happen, the release of an MVP could have an adverse effect on the overall brand.

● Define the project vision and scope through user and competitors research, market review, prototyping, and testing. Doing this will help you to choose the functional scope for your MVP, that answers users’ needs the best.

● Remember that the initial product which is released is intended to be the basic viable product. It's not a good idea to try and make the product perfect from the start. Doing this only defeats the object of opting for MVP development for startups.

● Ensure that feedback is received and utilized throughout the development process. This means that each new release of your MVP should be a better solution than the previous one.

● Have monetization in mind at all times during the development process. It's also important to aim to produce a product that has an optimal market.

● Take note of the behavior of users right from the start. This behavior should be used to help form future development considerations.

● Get your product to market as soon as possible. It's not a good idea to delay product entry to the market by simply adding additional features again and again.

What you should not do

There are also certain things which are bad practice when you are developing an MVP. These are the things that you should not do.

● Add functionality that is not necessary. This only serves to add additional cost and delay entry to the market.

● Release an MVP that is not viable. The whole point of an MVP is that it is a minimum viable product.

● Be reluctant to start again from scratch if necessary. There may be times when a product is never going to be a success, no matter what adjustments are made. If the feedback you receive suggests this, you should consider abandoning the product and beginning again from scratch.

Example of the MVP release

We at Uptech had an idea to create a performance management software for small and medium companies.
Performance management is a broad field. We did research and identified that one of the first needs the companies have is to align the team around common goals (usually OKRs).
That’s what we decided to focus on - to release an MVP with only one feature - OKR management.
Thus we launched landing page and started collecting the waiting list for the product (we received 350 organic sign-ups before the release).
That allowed us to move quickly, create prototypes, and validate them with real users in 3 weeks, and in 1.5 months, release the MVP version of the app - https://app.plai.team.
To release that fast, we focused only on the essential features that were needed for companies to set and track OKR. Also, we made the app for the desktop browser only.
In the first week after the silent release, we onboarded the first users and were able to iterate based on their feedback. The app is now growing and improving.

Following the right MVP development approach, we saved time and money and were able to bring the product to market from idea to launch in just 2 months. 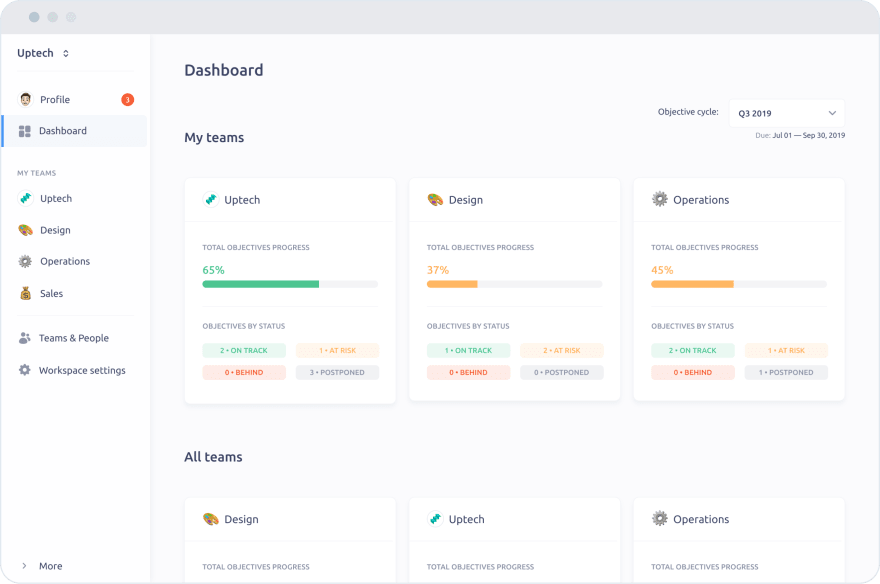 You can see what you should and should not do when you are developing an MVP. It's also important to note that you are not necessarily on your own in making this happen. You can make use of MVP development services to help you. These are the experts who can tell you what you need to know about best practices for MVP development. They can also give you examples of viable products.

It makes sense to use MVP development services. Doing so gives your startup the best chance of undertaking a successful MVP development process. For example, we at Uptech https://uptech.team/ recommend conducting user and competitors research before starting any development. Without the proper Discovery, it’s just speculation about the real scope of the project.

Developing an MVP for your startup may present the best way of getting your product to market quickly and affordably. It allows you to release a viable but basic product to a group of early adopters. Their feedback helps you to develop a fully functional product that has broad appeal and is likely to be successful.

How to Mentor Junior Developers