WinUI is the future of developing beautiful Fluent experiences on Windows 10, Windows 10X and future Windows versions to come. Just as it is important to plan for the future of your Windows development, it is also important to make sure your future UI stack investments are going to be able to run on previous versions of Windows. This is just one of the scenarios Uno Platform can play in making WinUI run everywhere.

The Uno Platform enables C# and XAML based code to run on iOS, Android, and WebAssembly. To avoid having to learn the UI-layout techniques and approaches for each platform, the Uno Platform mimics the Windows XAML approach of defining UI and layouts. The Uno Platform does this by providing full API definitions of the Universal Windows Platform and implementations of parts of the API – such as Windows.UI.XAML. Uno Platform is Open Source (Apache 2.0) and available on GitHub.

How it works under the hood

WinUI 3.0 will ship independently of Windows, allowing its features and capabilities to be used on in-market versions of Windows 10. As of today, with Uno Platform WinUI can also run on Windows 7 broadening its reach beyond UWP apps to traditional Win32 applications by utilizing WebAssembly.

Right after //build 2019 we started working together with Microsoft to bring full WinUI XAML support in Uno while Microsoft open sourced it. If you have been paying close attention to Uno GitHub repo you might have noticed some UWP code appear in it. With this tie-in, when using Uno Platform to get your UWP/WinUI 3.0 and later apps on Windows 7 you now have two options for running your app:

How is it different than XAML Islands?

XAML Islands enable creation of applications with ‘hybrid UI’. It allows for mixing different UIs from UWP/WinUI, Windows Forms and WPF, allowing developers to gradually modernize older desktop apps with new functionality found in UWP/WinUI. With Uno-built apps you are porting your complete UWP/WinUI application to Windows 7 by using WebAssembly.

Windows 7 is going to go down in history as one of the most used and loved operating systems. In a way, it has a similar reputation as the beloved Windows XP. January 2020 is around the corner and it still holds around 30% of the market share according to NetMarketShare or Global Stats statcounter.

While Windows 10 is clearly gaining market share (and we love it), and Windows 7 is on the decline, Windows 7 still has 3x more market share than MacOS.

In addition, in our quick Twitter survey we discovered that 22% of the developers we polled have a need to target Windows 7 as their deployment OS beyond the end of support date, some 12% even targeting for at least 3 more. A similar survey on CodeProject unveiled that over 33% of the developers polled there plan to target Windows 7 past its end of support date. 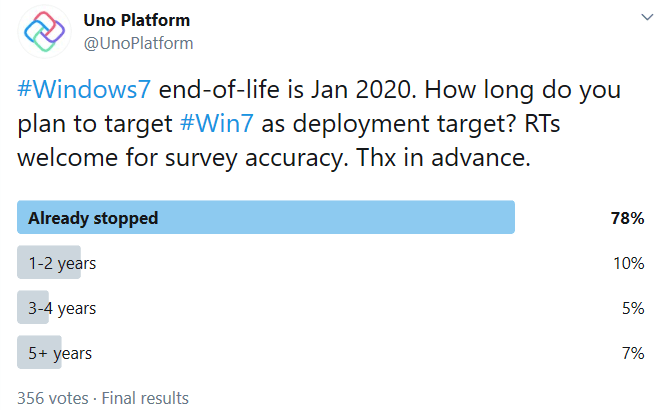 The estimated size of .NET developer community size is around 3-4 million developers. Given the poll stats above, there are at least 1,000,000 reasons why we think it is important to provide support for Windows 7 and help put WinUI Everywhere.

Uno Platform in Enterprise Scenarios and on Windows 7

We think WebAssembly is ready for prime time. We’ve had great experiences working with customers modernizing their rich internet/web applications with hundreds of screens with charts and grids, etc. One of our customers, HubSE, has been using Uno to modernize their LOB applications and they saved 10x the time in the process. Also, to try Uno’s support for WinUI on Windows 7, we ported our UADO (Universal Azure Dev Ops) app to Windows 7 and to our delight it works just great. UADO currently runs on iOS, Android, WebAssembly, Windows Store and now on Windows 7 as well. Try UADO in any of those scenarios, compare the performance and you will be a believer as well.

We are very proud to have had the opportunity to help in this way. This work and the access Microsoft gave us has helped us out tremendously to both deliver on the ‘WinUI everywhere’ promise, as well as to accelerate Uno development itself. For example, just having access to unit tests for UWP has accelerated our development by 3x. It is a great benefit to complete developer community and another result of what the ‘new open Microsoft’ is capable of.

We’d appreciate your feedback in using Uno Platform. Try Uno Platform now and reach out to us on Gitter with any feedback. #WinUIEverywhere

We are happy to be covering this crucial need for Windows developers and we hope to bring all of you 10x time savings like we did with HubSE and join the rest of our happy customers.

The Latest .NET 7 Features Will Change the Way You Code

OpenBB is pleased to announce the release of v1.3.0 which introduces new features and fixes! Available now to download!

Once suspended, uno-platform will not be able to comment or publish posts until their suspension is removed.

Once unsuspended, uno-platform will be able to comment and publish posts again.

Once unpublished, all posts by uno-platform will become hidden and only accessible to themselves.

If uno-platform is not suspended, they can still re-publish their posts from their dashboard.

Once unpublished, this post will become invisible to the public and only accessible to Uno Platform.

Thanks for keeping DEV Community 👩‍💻👨‍💻 safe. Here is what you can do to flag uno-platform:

Unflagging uno-platform will restore default visibility to their posts.