One of the biggest lessons I am trying to learn as a mid-level dev is keeping my code simple.

I was working on a few algorithms for a bootcamp I planned to attend.

I tweeted this algorithm I was stuck on a couple weeks ago: 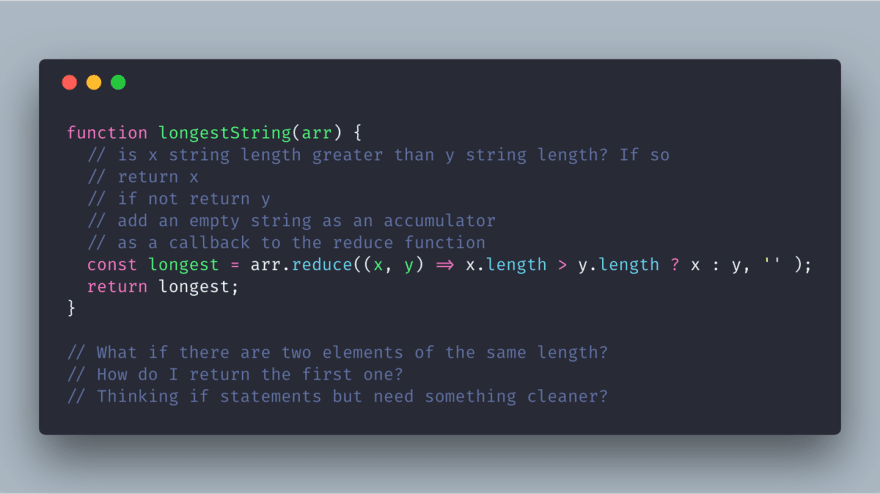 Need a bit of help here? Usually the Slack channels I am on are all asleep by now. 😏

Let's take a look below:

Here I am trying to get the longest string in an array. I thought I could accomplish this easily with a functional array method so I searched around. I read the MDN for map, filter and reduce to jog my memory, and then settled on reduce.

Someone on StackOverflow had a similar algorithm they were trying to solve. I adapted my algorithm based on that.

As the Twitter embed shows I had a bit of trouble with the comparison as my test wasn't passing. I added the appropriate operator and all was well.

This is as clean as it gets.

But is it readable?

This is What Mentors Are For

A friend of mine and mentor DM'd me on Twitter about this and the solutions people offered me on Twitter. He said that one solution was a mess and that if he had written anything like that he would have gotten chewed out by his boss.

My immediate response was to chuckle at the guy who gave me the nested ternary.

A Lesson in Dumb Code

My friend and I talked at length about cleverness and writing code for other humans to read. The variables I use in the two line solution don't have any context. Instead, I should have broken them out into something like this:

This is still terse but more readable and easier to understand.

I could have used a traditional for loop but wanted to look in the know and get in easily. I wanted to look clever and smart and in the process made the code unreadable, the hallmark of a mid-level dev.

When I was a newbie dev, I never understood why anyone would write a variable declaration like x or y. I disliked functional programming methods like reduce for that reason: most examples I found used these variables. I never understood what x was referencing. As someone who better understands the language I have fallen into that clever mid-level trap. Don't do it. While yes, it makes you look as if you know what you're doing, it also makes the code unreadable and you start to look less and less appealing as a potential dev candidate for X company.

As a friend of mine used to say:

If you enjoyed this, perhaps you'd also like to see some stuff from my newsletter. No spam. 50% dope content 50% dope links. No worries if that isn't your thing.

Once suspended, tiffany will not be able to comment or publish posts until their suspension is removed.

Once unsuspended, tiffany will be able to comment and publish posts again.

Once unpublished, all posts by tiffany will become hidden and only accessible to themselves.

If tiffany is not suspended, they can still re-publish their posts from their dashboard.

Once unpublished, this post will become invisible to the public and only accessible to Tiffany White.

Thanks for keeping DEV Community 👩‍💻👨‍💻 safe. Here is what you can do to flag tiffany:

Unflagging tiffany will restore default visibility to their posts.