Unsurprisingly, for the eighth year in a row, JavaScript has maintained it's stronghold as the most commonly used programming language. Going further down the list, we also see moderate gains for TypeScript, edging out C in terms of popularity. Additionally, Ruby, once in the top 10 of this list as recently as 2017, has declined, being surpassed by newer, trendier technologies such as Go and Kotlin. 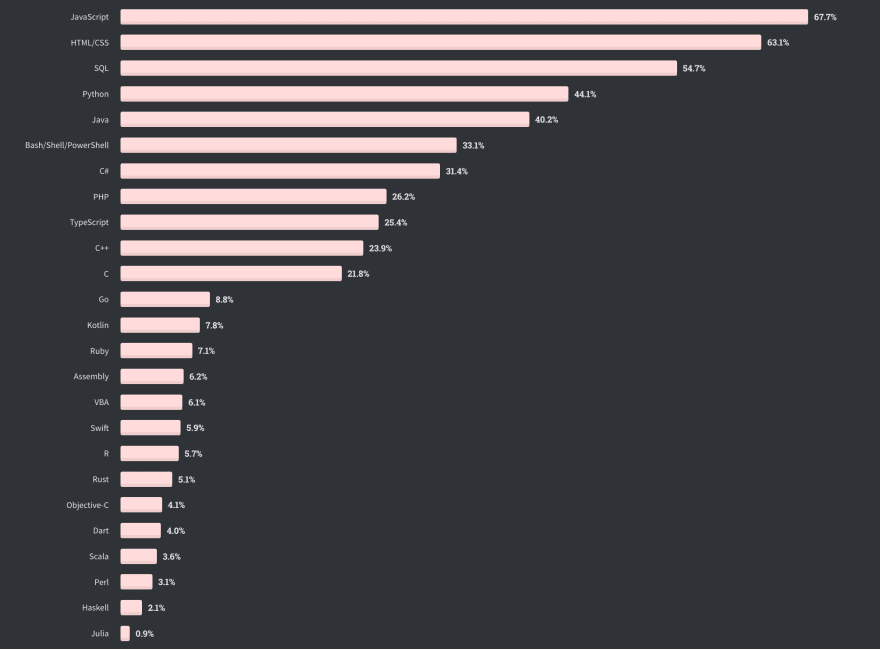 When focusing purely on web frameworks, we see that jQuery is still king, but is slowly losing ground to React.js and Angular year over year. We do see some consolidation, as more than 35% of respondents use jQuery, React, a version of Angular (combining Angular, which represents Angular 2+, and Angular.js) or a flavor of ASP.NET (ASP.NET or ASP.NET Core). 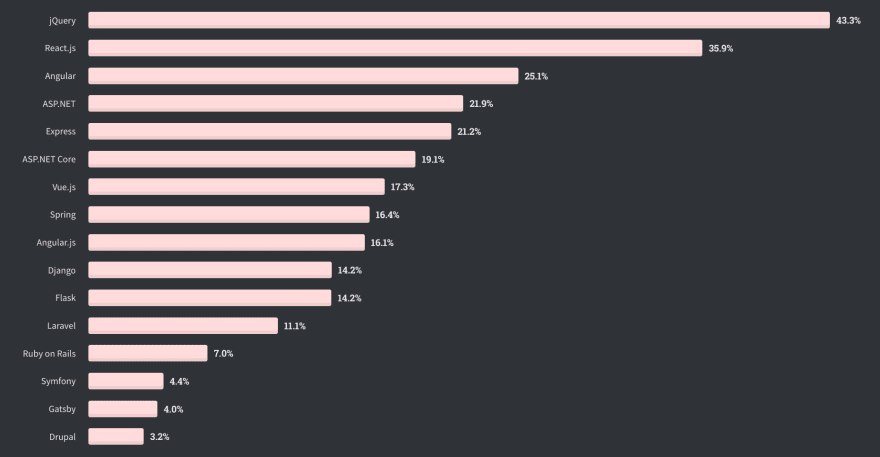 Other Frameworks, Libraries, and Tools

Similar to last year, we asked about many of the other miscellaneous technologies that developers are using. For the second year in a row, Node.js takes the top spot, as it is used by half of the respondents. We also see growth across the board in the popularity of data analysis and machine learning technologies such as Pandas, TensorFlow, and Torch/PyTorch. 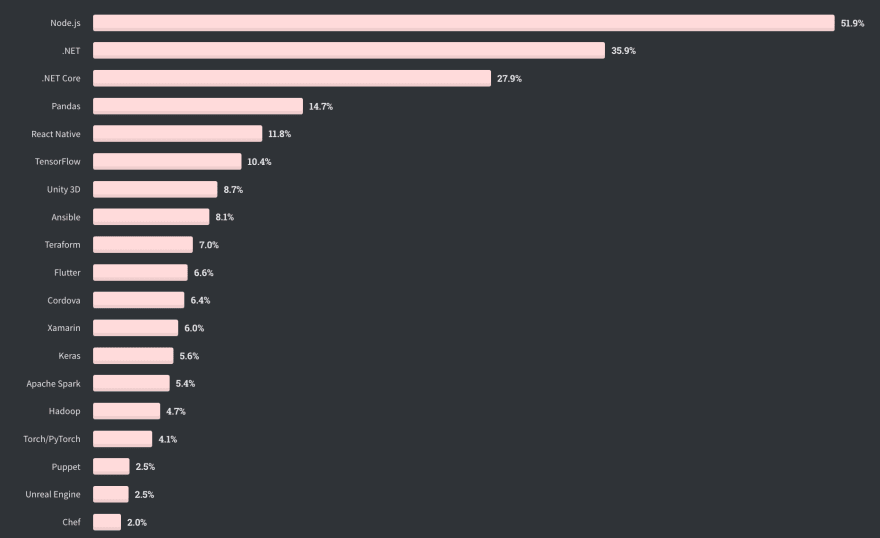 When looking at database technologies, the results are mostly consistent with what we observed last year. MySQL has maintained the top spot, followed by PostgreSQL and Microsoft SQL Server. However, we see some slight growth in the popularity of Firebase, which edged out Elasticsearch this year.

Linux and Windows maintain the top spots for most popular platforms, with over half of the respondents reporting that they have done development work with them this year. We also see some year over year growth in the popularity of container technologies such as Docker and Kubernetes.

Most Loved, Dreaded, and Wanted Languages

For five years running, Rust has taken the top spot as the most loved programming language. TypeScript is second surpassing Python compared to last year. We also see big gains in Go, moving up to 5th from 10th last year.

VBA, Objective C, and Perl hold the top spots for the most dreaded languages—languages that had a high percentage of developers who are currently using them, but have no interest in continuing to do so.

If we look at technologies that developers report that they do not use but want to learn, Python takes the top spot for the fourth year in a row. We also see some modest gains in the interest in learning Rust. 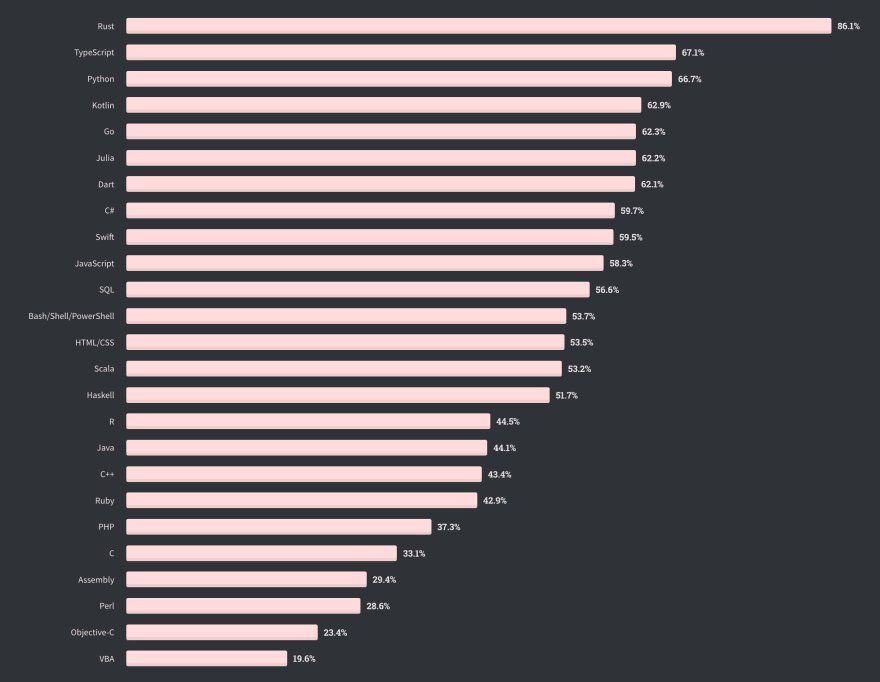 ASP.NET Core is the most loved web framework, beating out React.js. Gatsby, a newcomer on the survey, is already sitting at 5th, being loved by 60% of the respondents.

Although it is amongst the most popular web frameworks, Angular.js is also considered to be the most dreaded. 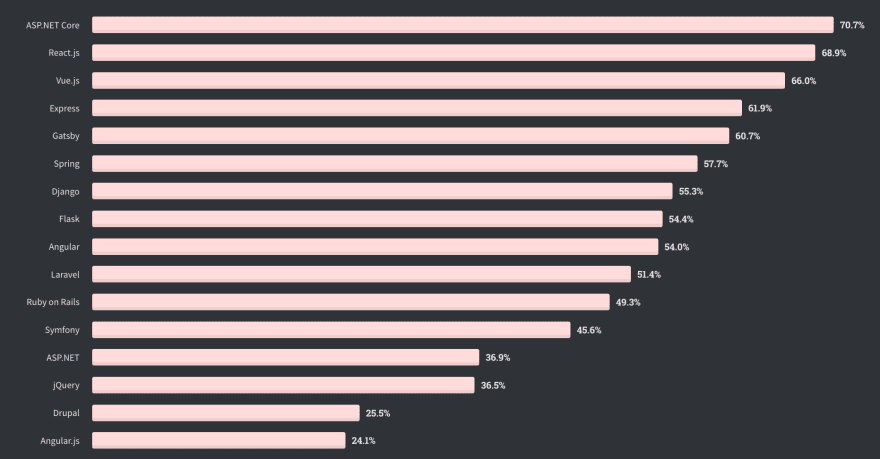 Most Loved, Dreaded, and Wanted Other Frameworks, Libraries, and Tools

.NET Core and Torch/PyTorch remain the most loved of the other remaining frameworks, libraries and tools. DevOps tools Chef and Puppet are among the most dreaded technologies. 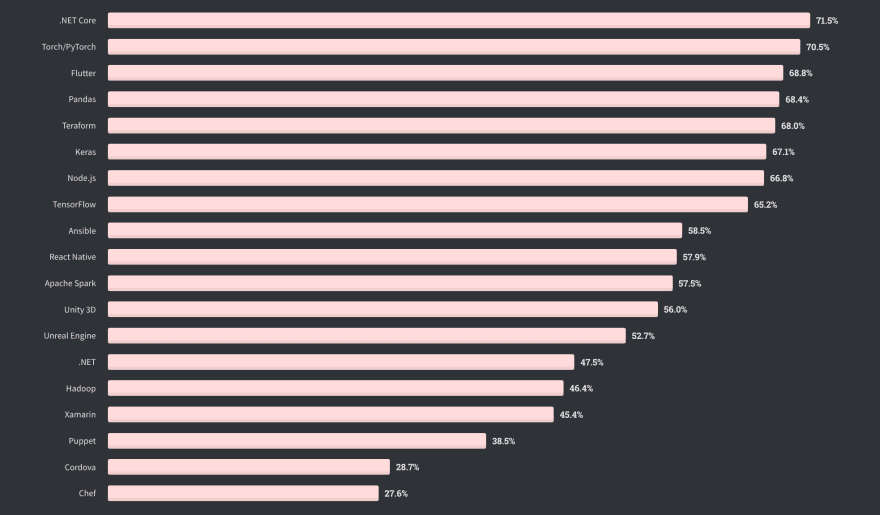 Linux remains the most loved platform. Container technologies Docker and Kubernetes rank as the second and third most loved. They are also among the platforms that developers most want to learn, which demonstrates how beloved they are. Wordpress is still the most dreaded, but Slack Apps and integrations, newly added to the list this year, rank high at the number four spot. 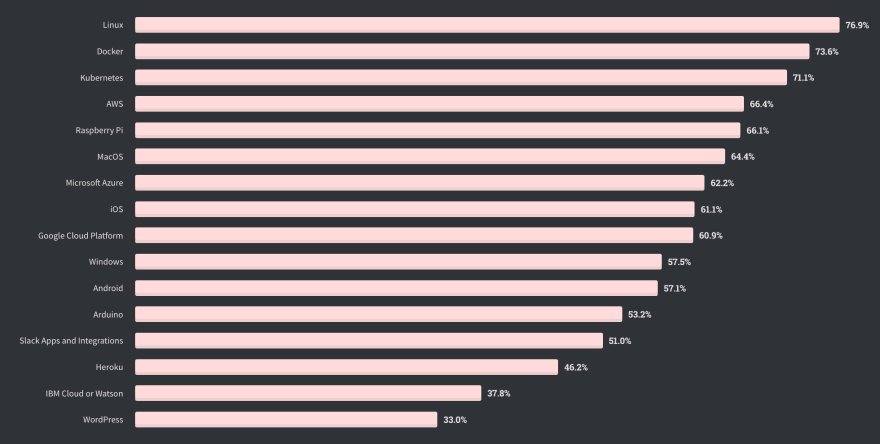 Of the professional developers who responded to the survey, almost 82% use GitHub as a collaborative tool and more than half use Slack.

Thank You For Reading this Blog!

Once suspended, therickedge will not be able to comment or publish posts until their suspension is removed.

Once unsuspended, therickedge will be able to comment and publish posts again.

Once unpublished, all posts by therickedge will become hidden and only accessible to themselves.

If therickedge is not suspended, they can still re-publish their posts from their dashboard.

Once unpublished, this post will become invisible to the public and only accessible to Rithik Samanthula.

Thanks for keeping DEV Community 👩‍💻👨‍💻 safe. Here is what you can do to flag therickedge:

Unflagging therickedge will restore default visibility to their posts.