In this article, let us discuss about React Hooks. So this is first part of the React Hooks series where we will cover 2 React Hooks in great depth - the useState and the useEffect hooks. So let us first understand what actually are these React Hooks.

What are React Hooks ?

React Hooks are typically JavaScript functions that let you HOOK into React State and Lifecycle methods provided by React. They let us use state and other React features without having us to write a class. React ships with a couple of built-in hooks like useState, useEffect, useContext, useReducer and more and you can even create your own custom hook which we will see in a separate article.

In this article, we will go over the following React Hooks:

But before that let us understand the rules that we as developers should abide by while working with React Hooks.

With that out of the way, let us understand each of the above 4 hooks one by one :

Now the SYNTAX of the useState function is something like this :

So here we are using array destructuring to pull out the two arguments that useState spits. First it gives us the current state value and the second one is the state updating function using which we can update our state.

Let us understand the useState hook with the help of the below example : 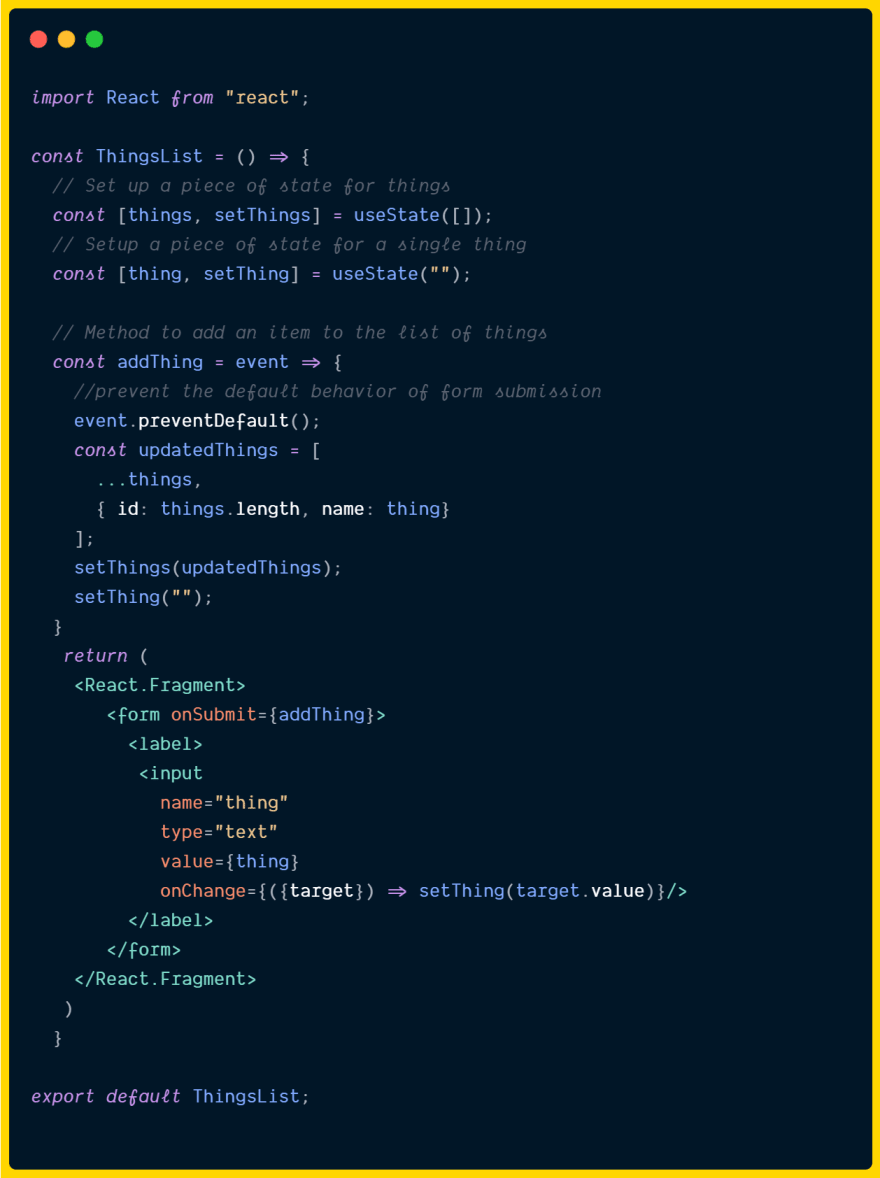 In the above example, all we have is a ThingsList Component where we have a form using which we can add a new thing to our list of things. So here we have defined two pieces of state - one is the things where we manage our list of things and we have given it an initial value to [], second we have the thing piece of state that is used to collect the generated state from the form. So in the above example, the form element generates some piece of state and it is this state that we want to commit to our component states so that we always have the latest state snapshots.
Also after form submission, we reset our form state back to empty quotes and our new thing is now a part of the things list.

To understand the useEffect React Hook, we first need to understand about the Side Effects.

What are Side Effects ?

From our knowledge of React, we know that our React App has one main role : render the UI and react to user input to re-render the UI when it is needed.
So React evaluates and renders JSX, manages state and props, re-evaluates the component upon changes in state and props. This is all possible because of the reactivity system of React and the features that React ships with.

Side Effects are anything else that might be happening in your application. It could be some HTTP request that you make, storing something in the localStorage, setting and managing timers.
Now the main thing to emphasize here is that these tasks (which we termed as side effects) must happen outside of the normal component evaluation and render cycle and the reason for that is that these side effects might block or delay the rendering process.

The useEffect Hook is simply another built in hook. Let us see the basic structure of a useEffect hook

You should add everything that you use in the effect function as a dependency i.e all the state variables and the functions you use in there.

That is of course correct, but there are a few exceptions that you should be aware of :

Let us see a very simple example to understand this : 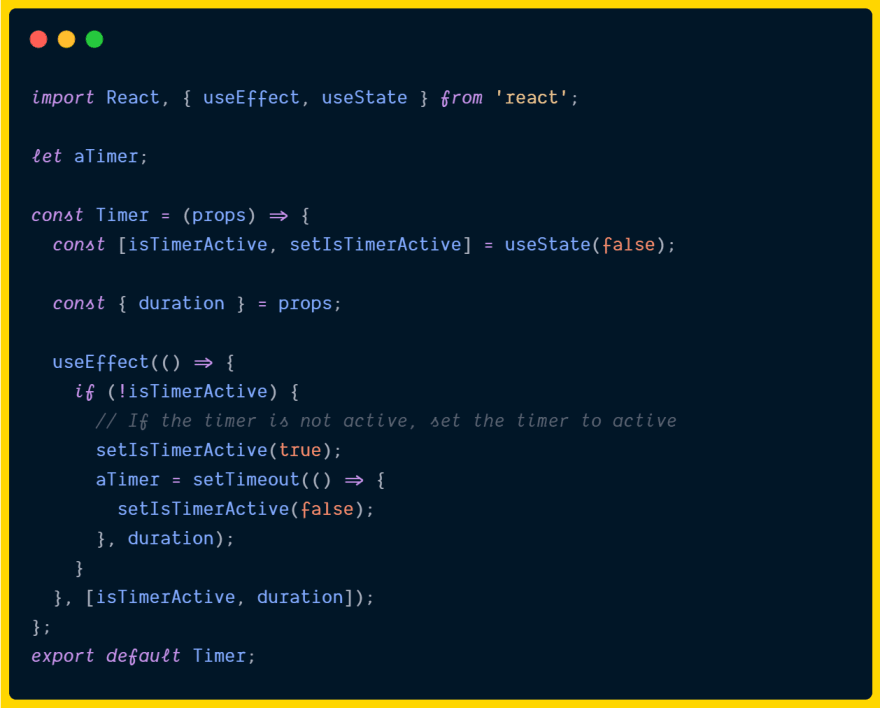 isTimerActive is added as a dependency because it's in the component state that may change when the component changes (e.g because the state was updated)

aTimer is NOT added as a dependency for the simple reason that it is defined outside the component and hence changing it (no matter where) wouldn't cause the component re-evaluation.

setTimeout is NOT added as a dependency because it's a built-in Browser API -it is independent from React and your components and it does not change as well.

Sometimes we may need an effect for performing cleanup tasks. So what we do in this case is that we return a cleanup function which React ultimately executes to perform the cleanup task (see the structure of useEffect shown above).

So this is it for the very first part of React Hooks. In the next article, we will learn about other React Hooks. So stay tuned !

If you are looking to learn Web Development, I have curated a FREE course for you on my YouTube Channel, check the below article :

If you have spare 2 hours, then utilize them by creating these 10 JavaScript Projects in under 2 Hours

Are you too old/young to learn programming?