In this series of articles, we are going to implement bubble sort algorithm on the type level using (abusing) Rust's type system, which is Turing-complete.

The goal I want to accomplish by these articles is to help you understand what type level programming feels like, try to clear what's behind of all these "traits" and "impls", and to show what Rust's type system is capable of.

Basically, type level programming allows us to carry the computations to the compilation phase where the compiler infers relationships between types, rather than computing the values during the program runtime. 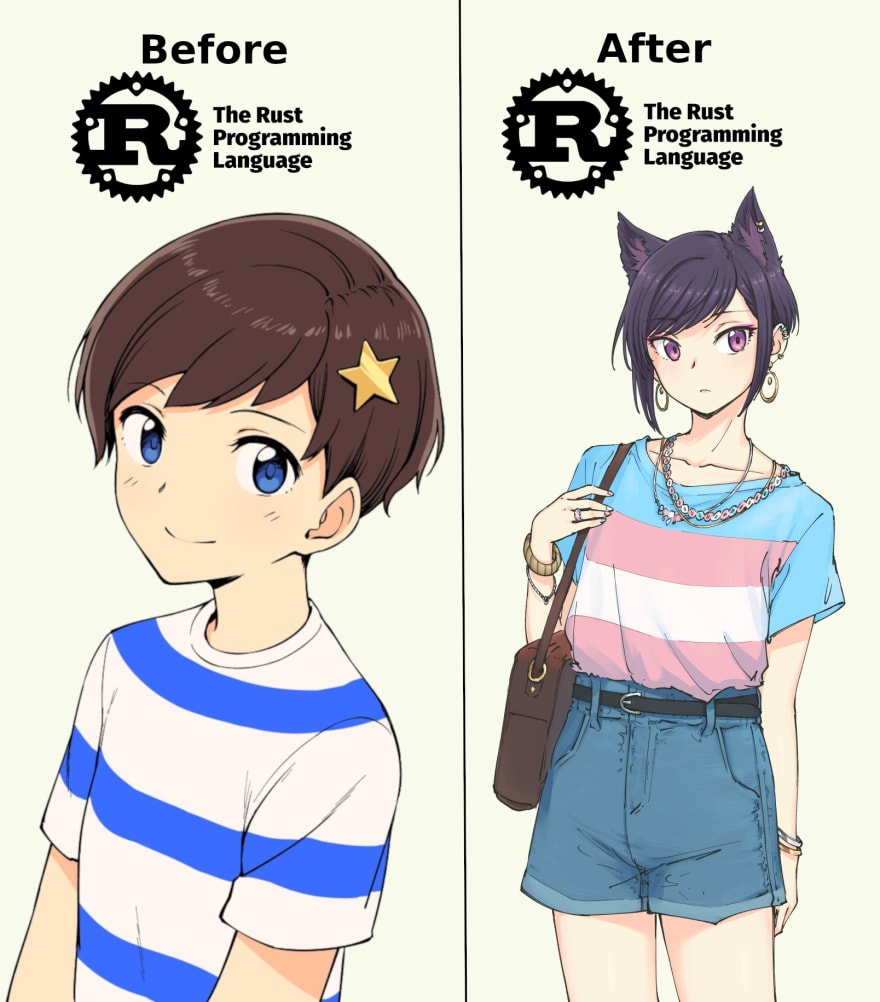 How do we express conditional logic with types?

We will use the power of traits. Traits are just like interfaces in C#/Java, except that you can implement traits for existing types (so the mindset is not "a type implements this interface" but rather "there's an implementation of this trait for a type").
Combined with generics, it gives us an ability to write multiple trait implementations for a single type just with different generic type arguments, allowing the compiler to decide what implementation must be picked for a particular case. Let's call it multidispatch.

We will see this in practice a bit later, for now, let's focus on numbers.

Well, how do we represent type-level numbers? We can certainly declare a lot of structs for each possible natural number like struct Num1; struct Num2; etc but that's just not a good idea (and is actually impossible since there are infinite amount of natural numbers). We will use Peano number encoding.

In Rust code it's going to look this way:

For example, in order to represent number 4 we will write this:

Next important thing about numbers in context of sorting is comparison.

Peano numbers comparison is based on the following rules:

We will use traits and associated types. Look at this piece:

This trait will be implemented for natural numbers.
Also, we will see multidispatch in action.

Let's write an implementation for the 1st rule of comparison:

In order to invoke the implementation, we need to write

which means "get an implementation of trait Compare for Zero, and get the associated Output from it".

As you can see, the compiler inferred the exact type that we needed. We have just made a computation on type level!

As you have seen, the <Zero as Compare<Zero>>::Output thing is kind of awkward (imagine if there are even nested invocations), and we can actually simplify it with the type aliases:

It makes the code MUCH more readable, and allow us to look at traits as just functions operating on types. The generic type parameters (Lhs, Rhs) are function's parameters, associated types are what function returns (Output).

Notice, that I didn't write the implementation for comparison between Succ<A> and Succ<B>. Let it be your home assignment (you can see the solution in the code repository, the link is down below). A hint: it involves recursion.

Thank you for reading the article, that's all for today! In the next part of the series, I am going to discuss type-level lists. Please, leave comments below if you like the article and in case you spotted any mistakes or haven't understood something, I am open for critics and discussion!

Getting Started with RIFE2

Once suspended, thedenisnikulin will not be able to comment or publish posts until their suspension is removed.

Once unsuspended, thedenisnikulin will be able to comment and publish posts again.

Once unpublished, all posts by thedenisnikulin will become hidden and only accessible to themselves.

If thedenisnikulin is not suspended, they can still re-publish their posts from their dashboard.

Once unpublished, this post will become invisible to the public and only accessible to Denis.

Thanks for keeping DEV Community 👩‍💻👨‍💻 safe. Here is what you can do to flag thedenisnikulin:

Unflagging thedenisnikulin will restore default visibility to their posts.