LPWAN is a type of wireless telecommunication designed for long-range communications between IoT devices, sensors etc. Its main purpose is to send small amounts of data over a great distance for a long period of time, even years on a single battery*.* Coverage can range from 1 km up to over 40 km.

Frequency which LPWAN providers like SigFox or LoraWaN use depends on location (and sometimes even the country). Providers use either unlicensed ISM bands , 868 MHz in Europe, 915 Mhz in North America and 433 MHz in Asia, or licensed LTE frequency bands. 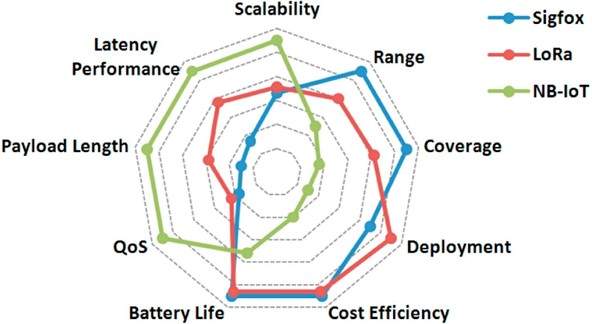 The respective advantages of Sigfox, LoRaWAN, and NB-IoT. Source: The Korean Institute of Communications and Information Sciences (KICS) as published in ICT Express, March 2019.

Sigfox was founded in 2009 in France.Today they are available in over 60 countries and their numbers are constantly growing. They offer end-to-end LPWAN solutions. Sigfox network architecture is built using base stations in a star topology, but with their own cloud service acting as a middle man. That kind of architecture offers some great benefits such as data security and data flow via API.

LoRaWaN network architecture is deployed as a typical star topology, with a gateway in the middle that converts radio signal to IP and vice versa. They are mainly used for telemetric data transfers and object tracking. Messages transmitted by an end device with LoRaWAN are received by all base stations in the range, which increases the ratio of successfully received messages. However, that requires multiple base stations in range, as well as the need to filter duplicated messages, which leads to increased network deployment cost.

NB-IoT , which stands for Narrowband Internet of Things, uses licensed frequency spectrum, unlike SigFox and LoRa. Their communication protocol is based on the LTE protocol and it can coexist with both GSM and LTE protocols. NB-IoT frequency band width is 200 KHz, and because of that there are 3 operation modes possible: stand-alone operation which utilizes GSM frequency bands currently in use, guard-band operation that utilizes unused resource blocks within LTE band and in-band operation which utilizes resource blocks within an LTE carrier.

CAT-M, officially known as LTE CAT-M1, is the second generation of LTE chips developed by 3GPP. As well as coexisting with 2G, 3G and 4G mobile networks , LTE-M network benefits from their security, privacy and other features. Unlike the rest of the world where GSM spectra are the norm, US service providers have system architecture for LTE-M.