Building a project from the ground up is difficult since it takes time. And it is frustrating. We spend more time placing components than enhancing the functionality of the application. It’s also a waste of time because we’re writing code that’s already been created and is readily available to you.

A framework is an answer to all of these issues. There are frameworks available for a variety of applications.

For everyone working in the front-end development area today, React (ReactJS) is a library that needs no introduction.

In brief, React also known as React js is a JavaScript library for creating user interfaces. UI frameworks for Reactjs are free and open-source. Facebook and a community of individual developers maintain it. A growing number of support libraries are available to assist us in efficiently customizing our UI components. 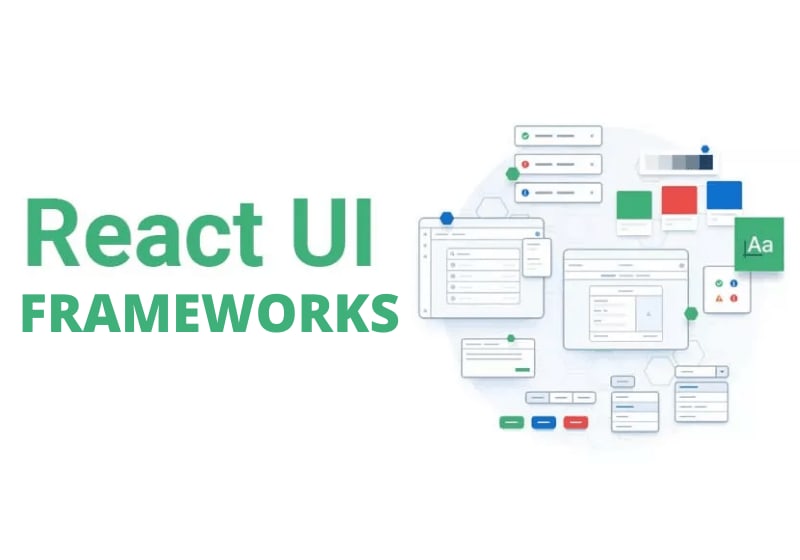 What are the benefits of using design frameworks?

When it comes to user interface design or UI frameworks there are numerous options. Components are always reused and have a set structure when working with a given design language. Many components are similar across projects, even if you aren’t precisely following a design language.

A design framework provides a toolset of regularly used UI components to developers. It permits the developers to work on the project more quickly because they aren’t reinventing the wheel. Developers have access to an almost limitless number of UI libraries with bespoke components from which to construct apps.

However, not every React component library is created equal. Some are suited for general usage. While others were designed exclusively for web development. And then there are others tailored to specific use cases, such as enterprise product development.

The design that helps you produce the finest possible graphical user interface is the key to a high-quality user interface. Take a look at our list of 6 of the greatest UI Frameworks based on React.js.

Material UI is a set of React UI components that makes web development go faster and easier. MaterialUI is a suite of React Components that follow the Material Design Guidelines from Google.

To install, run the following command:

When it comes to preconfigured components, we need to know how many UI widgets are available and whether they can be altered using configurations. Material design is inspired by the physical world and textures, with the UI elements kept to a minimum.

Grid-based layouts, responsive animations and transitions, padding, and depth effects like lighting and shadows are being used increasingly frequently.

Ant Design is a web application UI design language that includes a collection of high-quality React components out of the box. This UI framework has many components and even a tutorial with Create-react-app, and it supports a browser, server-side rendering, and Electron environments. It’s written in TypeScript and has all of the defined types.

In our React project, Ant Design Ui Framework is easy to set up and use by:

Ant Design focuses on the following aspects, according to their design values page:

Natural — and interaction that is simple to use and avoids any unnecessary complexity.

Certain — developing design principles to avoid goods that are inefficient and require a lot of maintenance.

Growing — focusing on the discoverability of the product’s functionalities and values through design.

Bootstrap JavaScript is replaced by React-Bootstrap, which is created with the world’s most popular CSS framework. The most popular front-end framework has been redesigned for React.

Semantic UI is a UI/UX development framework that aids in the creation of beautiful, responsive layouts using HTML that is human-friendly.

Over fifty components are included in the package, including segments, progress bars, transitions, pagination, and more.

Grommet is a React-based UI framework that combines accessibility, modularity, responsiveness, and themes.

To install the Grommet UI framework, run the following command in your React app:

Grommet is a component library for online projects that are responsive, accessible, and mobile-first. It even has a collection of SVG icons. The Grommet Design Kit is an easy-to-use drag-and-drop tool for designing your layout and components.

Blueprint is a web-based UI toolkit based on React. Blueprint is a new open-source design framework for desktop apps that are built as a set of composable React components.

Blueprint is a set of React UI components that encompasses the vast majority of popular web interface elements, patterns, and interactions. By using Blueprint, you can rest assured that your UI will be elegant and simple to use, allowing you to concentrate on developing your product rather than the atomic components that make it up.

So now you have a list of 5 of the most popular and fast-evolving UI frameworks for ReactJS, all of which are freely available and frequently used these days. As a result, go over these component frameworks briefly to make your project development process easier.

Remember, there is no “perfect” React UI Design Framework that would be the best fit for all of your projects. But some characteristics make a framework easy to work with, such as

You can use these libraries for the ReactJS framework to create dynamic applications in less time and with less effort.

We, atTerasol Technologies, design custom solutions for businesses. We are site development professionals with extensive knowledge of UI frameworks, admin panel templates, free dashboard templates, and other online solutions. If you need help to create web and mobile applications, contact our experts now.

React App project unable to run from a shared drive

Job Roles inside an IT Department

Terasol Technologies
Terasol Technologies believes in building apps that will make you (and your customers) happy. Our whole development philosophy revolves around finding the best software solutions.
Convince me that Web3 is the worst
#web3 #webdev #healthydebate #discuss
Do you need to be good at math to be a programmer?
#programming #tutorial #productivity #codenewbie
Who is using Nx?
#typescript #javascript #discuss #tooling