Let’s cut straight to it: Impostor Syndrome has its uses.

In fact, I would argue that impostor syndrome can be one of the greatest triggers for success that people can see in their careers.

Let’s back up a bit for those confused on just what exactly impostor syndrome actually is:

The persistent inability to believe that one’s success is deserved or has been legitimately achieved as a result of one’s own efforts or skills.

In other words, impostor syndrome is an underlying anxiety about their own abilities that people can feel at various points in their lives and professional careers. A key thing here is that it doesn’t need to make rational or logical sense. It often doesn’t.

How Could this Possibly be a Good Thing?

I know. Impostor syndrome can be debilitating and it’s borderline insensitive for me to suggest that good can come out of it, except I firmly believe that it can.

Instead of keeping things at a conceptual level, I think it’d be more efficient to talk about some examples from my own professional life.

And so, here are 3 times I’ve faced impostor syndrome, my strategies for overcoming it at each point, and the results of those battles.

I’m a software developer. I have been since I was 7 to some extent or another. When I was in school I knew I wanted to be a developer because I loved going home every night to program fun projects.

I say this to give you some context, because the first time I felt impostor syndrome was not when I entered the work force, but when I rose in rank to a senior engineer roughly 3 years into my formal professional career.

I had the skills I needed to succeed and I’ve always been able to learn new things quickly, but in this role I was a specialist taking point on projects nobody else had similar skills for. That is to say that if I got stuck (and everyone gets stuck), I had nobody to turn to.

This was not a good recipe for success, but I wasn’t aware enough of what was going on.

My mind would tell me that I wasn’t really a senior developer and these little unknowns and oddities proved it. I had nobody to talk to about the unknowns and it was a culture that valued confidence over all else, so I tried to focus on the problems and do the best that I could.

The result was humbling. I had gaps I didn’t realize I had and those issues caused all manor of havoc and humiliation in production.

I’ve written more on this matter as it was the worst bug I ever caused, but we won’t dwell much more on it here.

Years later, I think all involved (including me) realized that it was just a problem of isolation and trying new things without knowing the pitfalls or having a guide to help me, but that stigma and shame hurt for years and perpetuated my own mental lie that I wasn’t really senior.

Strategy : Isolate and try to ignore the self-doubts

Years later, after I had proven my aptitude time and time again and made some truly remarkable things (and overcome some very difficult obstacles), I realized that I was getting older and wanted to contribute more to an organization than just code.

I valued investing in the lives and careers of younger developers and so I set out to find my first management role. I found it, and immediately upon getting the job offer I was seized with the greatest degree of impostor syndrome I’ve ever felt.

Only this time I recognized it as impostor syndrome. I took a step back and looked at some key facts:

I really couldn’t have been more ready / qualified for that role on paper, yet my mind clung to “people don’t report to you, they’ll know you’re a fraud and nobody will listen to you”.

Even though I recognized impostor syndrome as laughable, the anxiety was still real and significant. I realized that my transition period between jobs could be full of anxiety or I could take that and do something with it.

And so I read roughly 20 used books on management and technical topics in 3 weeks. Additionally, I watched a number of online courses on leadership, management, and communication.

In other words, I took that fear that I wasn’t good enough or wasn’t qualified enough and I made it laughably absurd. True, I did it by taking some pretty extreme measures to study, but I enjoyed studying and I didn’t enjoy sitting and being anxious of failure.

By the time I walked in the door on my first day, I was ready to go and people recognized it in my demeanor and competencies.

Just two weeks ago, I gave my first talk at a technology conference. I’m not an extrovert, I don’t like crowds, and I don’t really like the spotlight or attention.

I was there because I had learned some technical and managerial things that I felt the community could benefit from and I saw that my experience level gave me things I could and should share with others. I also wanted to work on my verbal communication skills in case I may someday want to teach or lead at a higher level.

So I applied to a large regional technical conference. Typically I attend a smaller conference in my same town, but the request for speakers for that conference was a half a year away and I decided to try submitting to the larger one first.

As soon as I submitted, I felt that impostor syndrome again as my mind asked:

“They won’t know who you are. There’s no way you’ll get accepted. Do you really think you can speak to a group of people at a conference?”

There were some legitimate concerns in there. I was relatively unknown, and so I wrote an article a day while I was waiting to hear back on my submission.

I kept writing. I found my voice and I found my ability to communicate and share things with others.

I also found that my writing honed and focused the content of my talks and my talks gave my writing a purpose to be – research and preparation as well as sharing ideas and seeing what worked well with the community.

And so I wrote and prepared. I practiced my slide deck once every other week or so, then more frequently as the conference approached, until the night before the talk when I did my 15th practice run in 3 months.

I was ready, my talk was polished and practiced, and I was ready to share it with others. 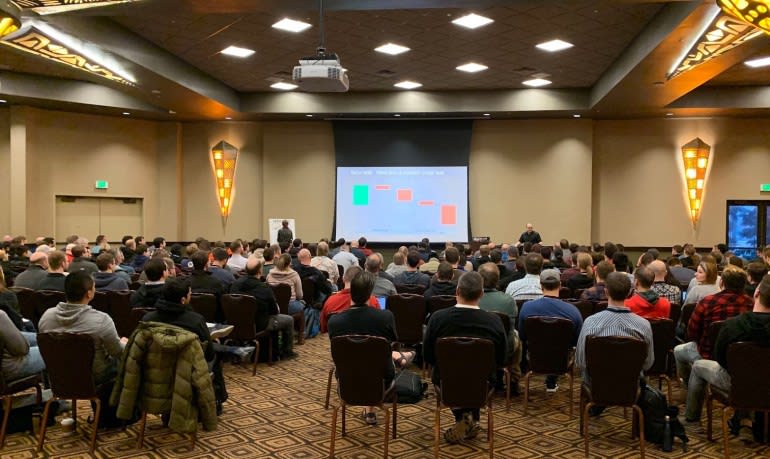 I gave the talk to a crowd of 310 people and it went fantstic despite some early glitches with my remote. I also really enjoyed preparing for the talk without exhausting myself.

Strategy: Address legitimate concerns in impostor syndrome, over prepare, but do so in a healthier manner

Result: High confidence in the talk, a successful and growing technical writing blog

TL;DR – How to Use Impostor Syndrome

My ultimate refrain here is to use principles of Judo and use the weight of impostor syndrome against it:

Go and do things big enough to make your mind doubt your ability to succeed.

The post How to Weaponize Impostor Syndrome appeared first on Kill All Defects.

What jobs did you have *before* software development?