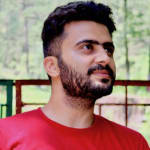 But I just couldn't help it. I had the opportunity, so I took it. Anyway, let me tell you about this new project first.

So here's the thing. Growing up in a typical Indian household, cricket had a huge impact in my life as a kid. 🏏 It was the go-to sport for me and all the other kids on the block, and whenever India played an international match, my dad and I would watch it together, almost religiously. 📺 It was bonding time for us, just like it must have been for millions of kids my age. 🙇🏻‍♂️

Last year, when I was feeling a bit nostalgic about cricket, I started working on CriCLI. My love for programming and cricket came together, and I made a cool little CLI app and left it there.

But then last week when I started XenoX Multiverse, things started getting busy here at XenoX HQ 🔥. We got a lot of new recruits wanting to join us. Exciting stuff. One might even say that we're on... fire. 😆

Around the same time, some of my fellow XenoX buddies had a bright idea and suggested we work on a cricket-related project since the ICC World Cup 2019 is going on right now.

"Well, guess what? I already have something like that!" I announced, grinning ear to ear.

I told them about my old CriCLI project, and so we spent the last few days refining it and adding more functionality. It looks much better now, and I thought a lot of my fellow programmers who also happen to be cricket nerds will appreciate this, so here it is.

CriCLI - get live cricket scores and commentary in your terminal

The installation is super easy. If you have node, just install it via npm:

You can get live cricket score, overs elapsed, current batsman, and other relevant data in your terminal.

To do this, simply run the command:

You can also get an extended summary by running this command:

And if you want to see a list of all commands, just run:

So check out CriCLI and let me know what other features you'd like to see! Or better yet, help me build the features yourself! 💪

Show CriCLI some love on ProductHunt as well. We just launched!

This time, we were having way too much fun with this. We decided to do a little experiment. Planned a little skit to go along with the release of CriCLI and quickly shot it in the office.
And since we wrote and acted out the whole thing in barely 20 minutes, you bet it was full of bloopers. 🤣

Big thanks for checking out CriCLI.

We had a superb week. And again thanks to all of you, Team XenoX is growing strong each day. If you like what we do and want to collaborate with us, you're most welcome to. Just add your name here and you're in!

We're making things official with the beginning of XenoX Multiverse. Team XenoX started as my dream, just a small team of devs working on open-source projects for the fun of it. But over the months, it has grown bigger and stronger. So with this, I want to formally announce the Team XenoX open source initiative. This is where the master list of all the projects and all the devs collaborating on XenoX will live.

If you want to be one of us, just write your name and you're in!

That's it. You're all set. Someone from the team will contact you and formally welcome you to the team. Cheers!

That's it for today, amigos! See you later!

Team XenoX
Come change the world with us. We aspire to be the biggest open-source initiative on the planet. Sponsored by Skynox Tech.

Flex items are not grid columns

There's a subtle but very important difference between how `flex-grow` and other growy-shrinky Flexbox rules behave and how the `fr` unit of CSS Grid works. Here we explore it using a practical example.

A guide to fully understanding Redis

Why didn't Microsoft use React or Angular to build Visual Studio Code?