A little over a year ago, Microsoft killed Wunderlist, the Internet's favorite to-do app created by a German startup 6Wunderkinder in 2009. In today's article, we take a look at the history of Wunderlist and the impact it made on the productivity space.

While Wunderlist servers shut down on May 6, 2020, many still feel disappointed by Microsoft's move. Sacrificing the well-polished Wunderlist to make place for To-Do was not something the app's fans had expected from the 2015 acquisition.

In this somewhat sentimental journey, we wind back the clock and revisit some of the pivotal moments in the history of Wunderlist. Here's an overview of the article. 👇

💡 Before you start... This article is part of our series where we discuss some of the most iconic productivity tools in history. Check other similar stories when you're done reading. 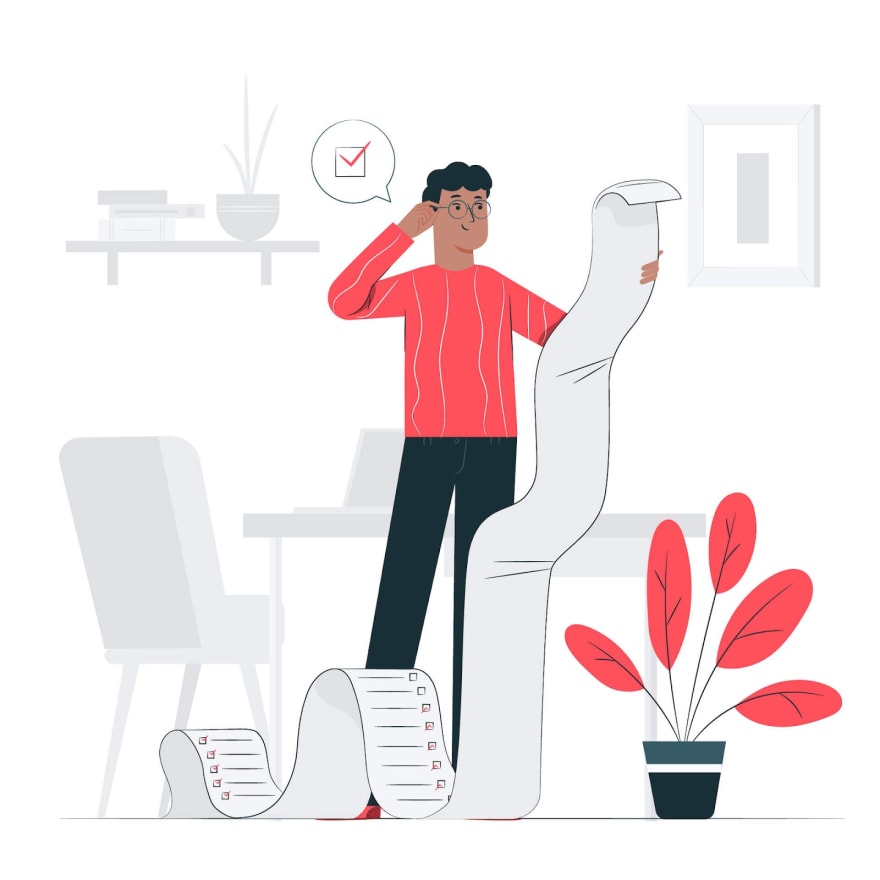 The Legacy and History of Wunderlist 🌟

Before Wunderlist, there was 6Wunderkinder, a Berlin-based startup founded by six friends, Charlette Prevot, Christian Reber, Daniel Marschner, Jan Martin, Robert Kock, and Sebastian Scheerer. Their mission? To revolutionize the world of productivity. 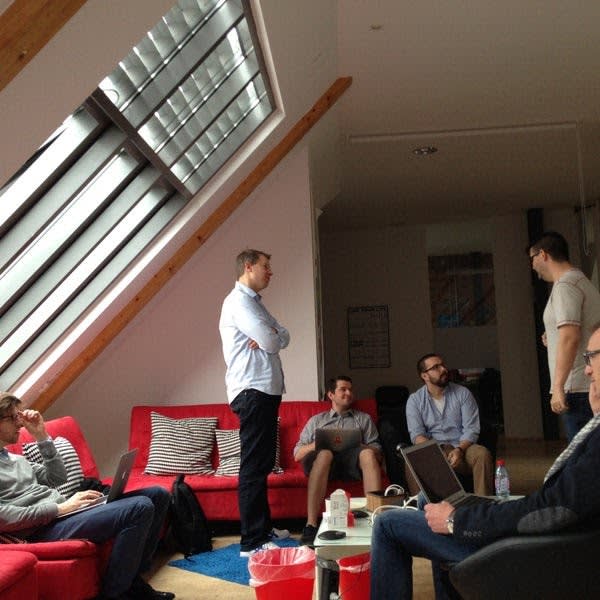 The dream of the 6 child prodigies---that's what the startup's name meant in German---soon became reality. With seed funding from High-Tech Gründerfonds and Frank Thelen's e42 GmbH, the team launched Wunderlist on November 9, 2010.

"When we started building Wunderlist, we've had a few key principles. We wanted to build a cross-platform product that works for individuals and teams. Whether you organize your personal shopping list or your house renovation or your student work, or if you run a big project and organize multiple companies, we wanted Wunderlist to work for everyone."

Christian Reber, "How to Build Great Software" by DRT(2)

While Wunderlist wasn't the first to-do and productivity tool around, it certainly did many things very well. The app boasted a simple and intuitive UI, excellent cross-platform experience, and a minimal learning curve. Plus, it was completely free. 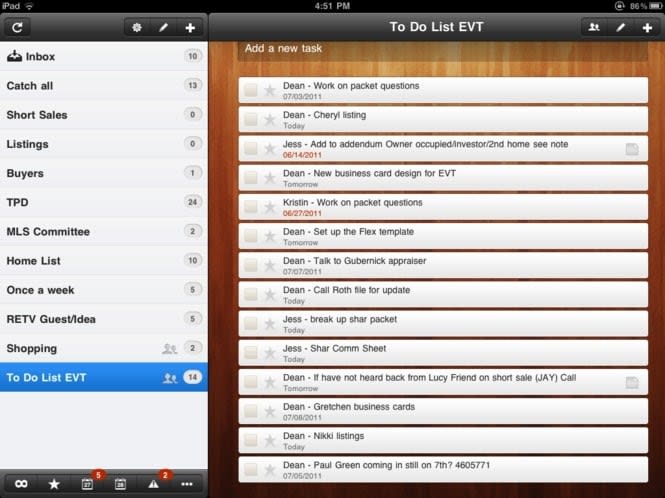 Despite modest expectations---the 6Wunderkinder team planned to score 15,000 registrations by the end of February 2011---Wunderlist managed to grab the hearts of 15,000 users by the end of November 2010, just one month since the launch.

Since Wunderlist was built using appcelerator Titanium, it was a matter of time before the developers expand its cross-platform potential. On December 10, 2011, the company released a Wunderlist app for the iPhone and announced another one for Android. 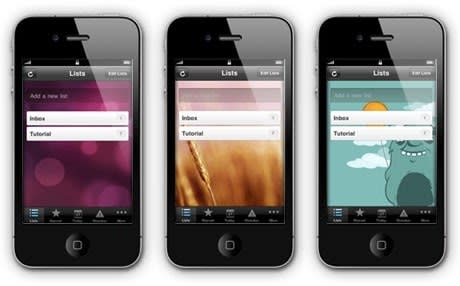 \
Wunderlist for iPhone by 6Wunderkinder(3)

By the end of December, the iPhone app had been download over 250,000 times and Wunderlist had grown to an impressive 110,000 active users.

At that point, 6Wunderkinder had already been working on a Wunderlist successor called Wunderkit. The team also announced plans to introduce a paid Wunderlist tier that would help scale the app's infrastructure. 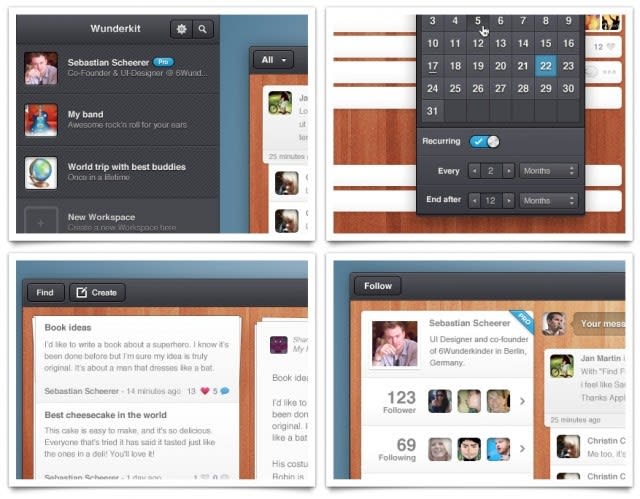 Wunderkit was meant to target both individual and enterprise clients and let users invite friends, family, and colleagues to collaborate on projects in one place.

By August 17, 2011, Wunderlist reached 1 million users (275 days since launch), which was a substantial success that surpassed the growth rate of services like Evernote and Twitter. 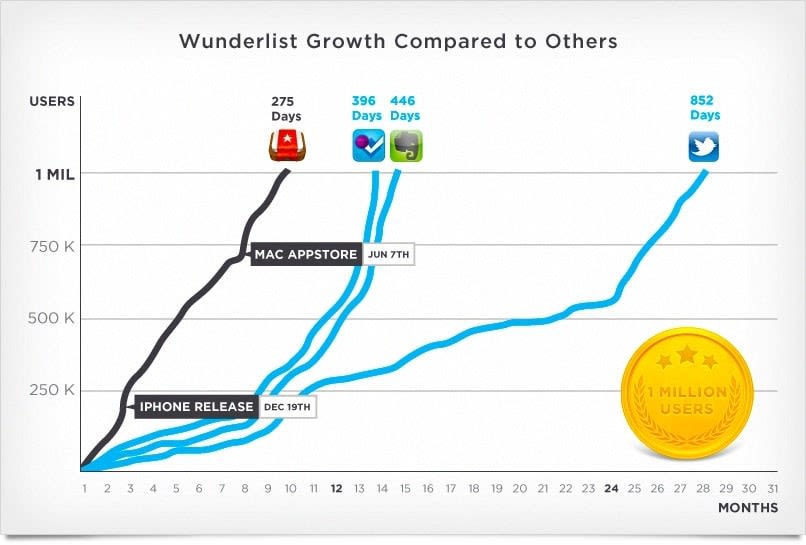 With 2.6 million downloads and 30 million tasks across 3.7 million lists, one thing was clear: Wunderlist was going places.

In September 2011, 6Wunderkinder expanded Wunderlist's reach with a native Linux app. Instead of running Wunderlist through a compatibility layer, Linux users could now enjoy the "sleekest task manager available for Linux" out of the box.

"Many of you have successfully got Wunderlist running on Linux via wine, and we were awestruck at the level of engagement and effort you went through. The demand was there, so we went ahead and built for Linux officially."(6) 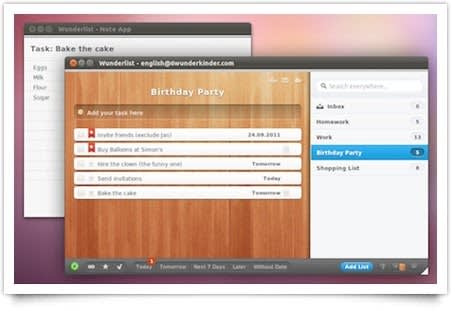 By that point, the app had been download over 5 million times and had close to three million users. Facing lower-than-expected signups and engagement, 6Wunderkinder decided to drop the Wunderkit project and refocus efforts on their first product.

"We simply weren't getting the traction we wanted. What's more you, our users, started to raise concerns. Concerns we were also faced with. Much like you we discovered bugs, scaling challenges and usability issues, which lead us to get frustrated with our own product. Not ideal. So we decided to rethink it."(7)

On September 6, 2012, the company announced a completely redesigned Wunderlist 2. The developers dropped the Titanium framework and rewrote the app from scratch. 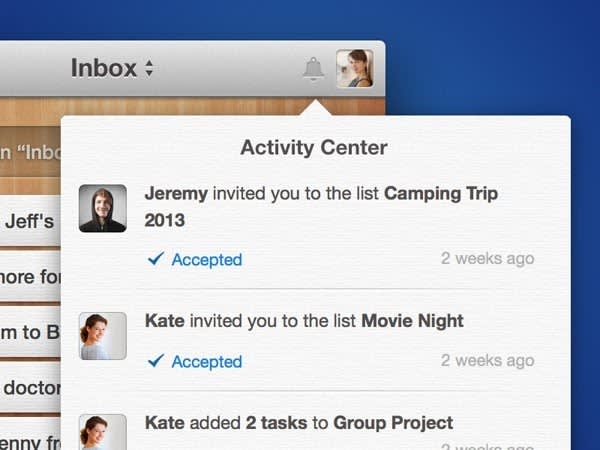 While the core Wunderlist experience did not change, the app was now split into five separate native apps with better performance and cross-platform synchronization.

"Wunderlist 2 has now been completely rebuilt with all new native apps, individually handcrafted for each platform [...]. Also, have we mentioned before that we have completely rewritten the API? Running 24/7 behind the scenes is now a brand new highly scalable and quickly extendible API, giving Wunderlist a whole lot more power under the hood."(9)

Wunderlist 2 was followed by Wunderlist Pro, a paid offshoot of the service. Pro introduced more collaboration features like assigning tasks and attachment support. 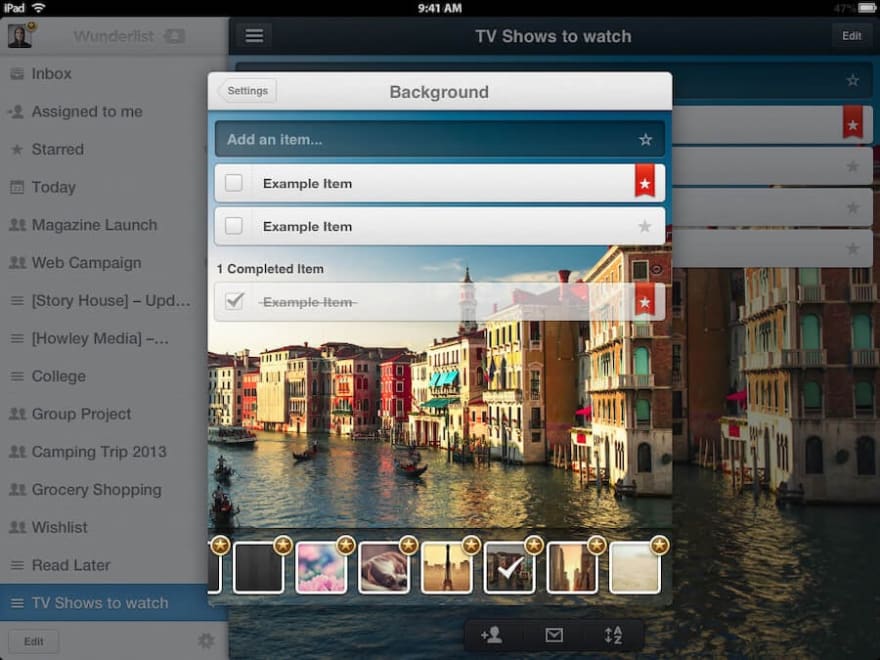 One year later, on July 31, 2014, 6Wunderkinder announced another revision of the app, Wunderlist 3. Among other things, the update introduced a redesigned interface, improved collaboration features, and real-time sync.

Everything seemed well on the Wunderlist front.

"So, What Went Wrong With Wunderlist?" 🧨

With a growing userbase and solid product at hand, 6Wunderkinder was on the right track to dominating the productivity space. But the history of Wunderlist is yet another example of an up-and-coming company that failed to reach its full potential. 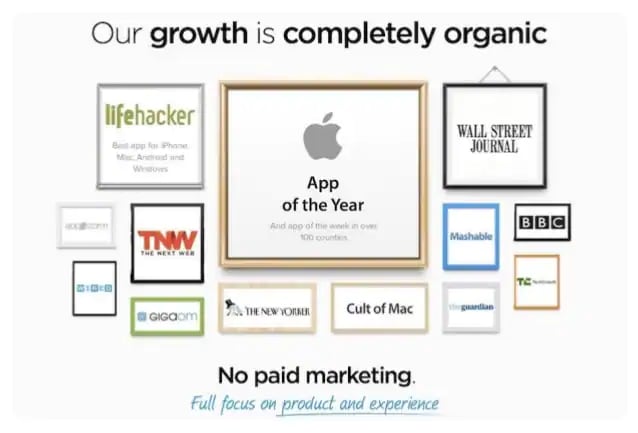 \
Wunderlist had the momentum to take over the productivity space

By dropping the business-oriented Wunderkit, the company was left with a devout group of personal users. While the cult-following could drive the Wunderlist brand and positive press, it wasn't enough for a sustainable business model. 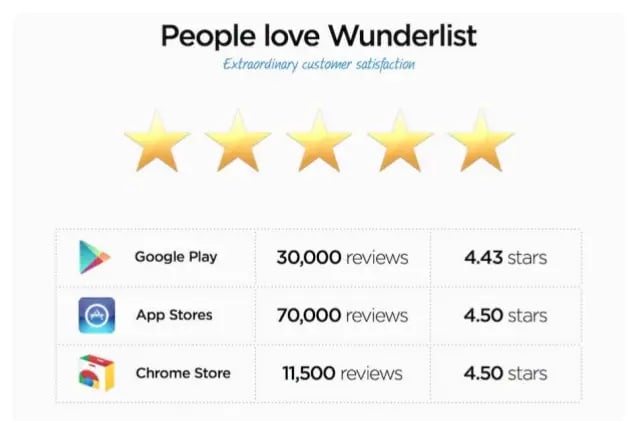 \
Users loved Wunderlist from day one

Wunderlist's rapid growth didn't escape the attention of Microsoft that had been trying to beef up its presence in the productivity space for quite some time. Lo and behold, on June 2, 2015, Microsoft announced the acquisition of 6Wunderkinder's talent and IP.

\
"The addition of Wunderlist to the Microsoft product portfolio fits squarely with our ambition to reinvent productivity for a mobile-first, cloud-first world."

At the time of the acquisition, Wunderlist 3 had over 13 million users and clocked more than 1 billion to-dos, so the new capital should've, in theory, given it a solid growth potential. 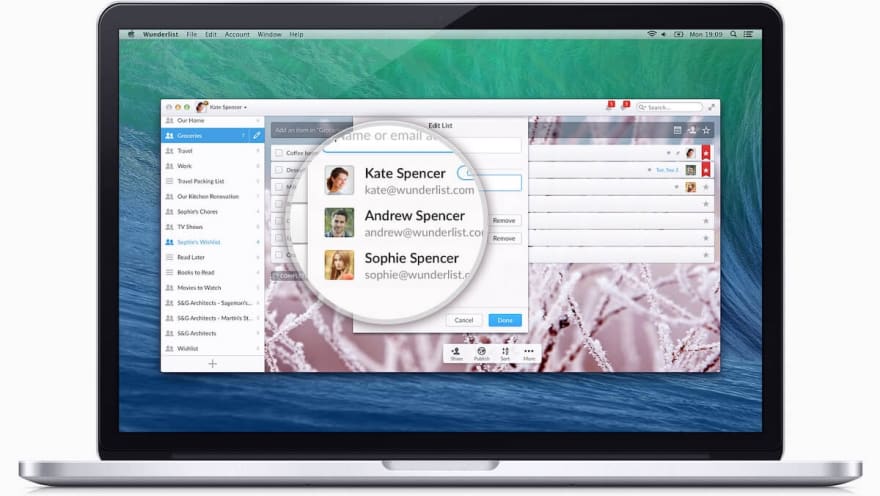 Unfortunately, the life of Wunderlist under Microsoft's wings didn't last long. A year after the acquisition, a replacement was already well on its way.

An early version of Microsoft's new to-do app dubbed Project Cheshire was spotted in June 2016. While the project was in its early stages and offered primitive functionality, it was obvious the company was planning to step up its productivity game, with or without Wunderlist. 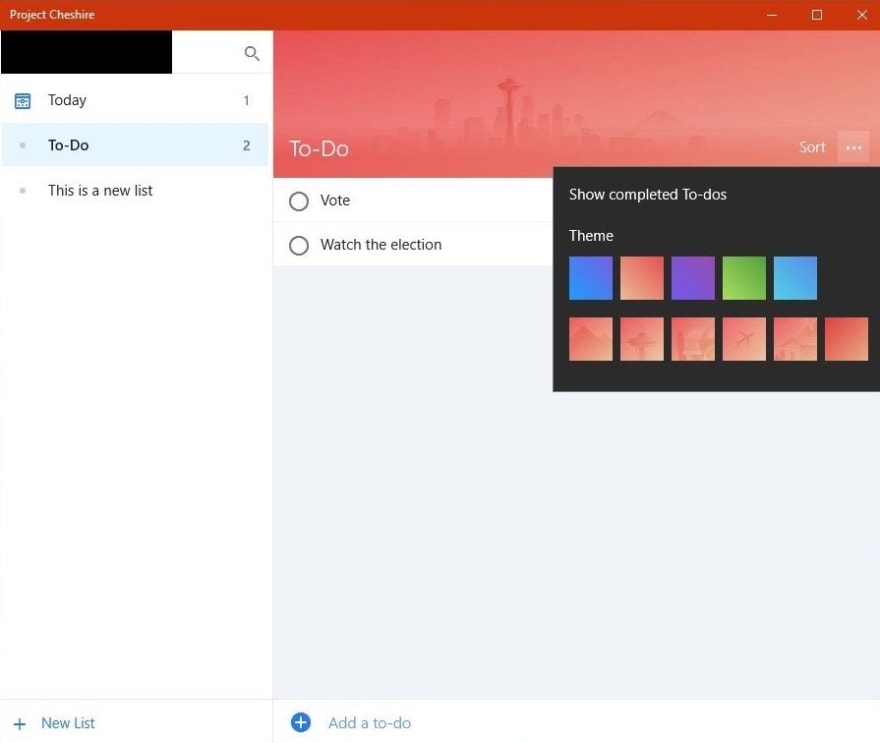 Wunderlist users didn't have to wait long for the inevitable. Microsoft introduced a preview version of To-Do in April 2017 and announced they'd eventually kill Wunderlist.

The irony of the whole takeover was that the 6Wunderkinder team acquired by Microsoft along with the IP was tasked with creating Wunderlist's successor.

"Once we are confident that we have incorporated the best of Wunderlist into Microsoft To-Do, we will retire Wunderlist. While the name and icon may change, the team that brought you Wunderlist continues on. We look forward to making Microsoft To-Do even more useful, intuitive and personal."

The Wunderlist situation saw one more plot twist when Christian Reber, one of the original 6Wunderkinder co-founders, offered to buy Wunderlist back from Microsoft. 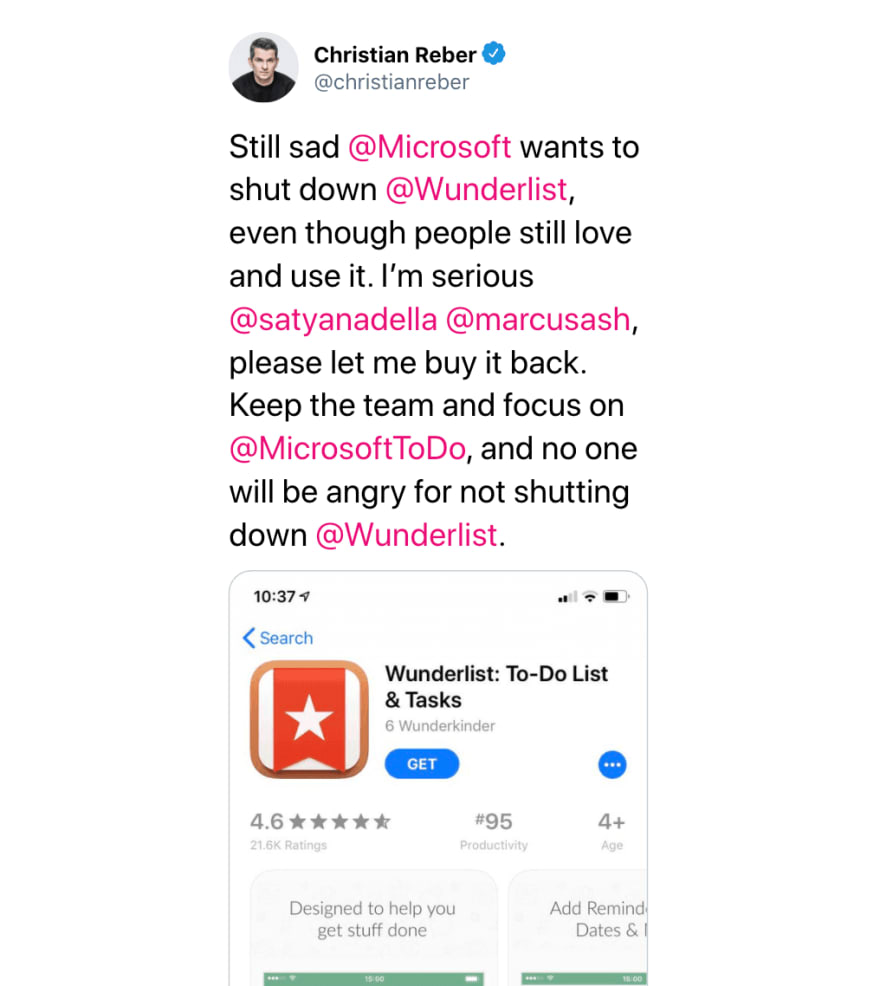 As expected, the deal didn't come through. Microsoft had already planted one foot in the door and wasn't going to release a strong competitor back into the wild. Finally, on May 6, 2020, the history of Wunderlist came to an end and the app joined its predecessors in the productivity Valhalla.

The Legacy: Why We Loved Wunderlist ❤️

Wunderlist wasn't the first productivity/to-do app in the wild. But it certainly was the first to strike a fine balance between utility and a user-friendly experience.

"Unless you need something endlessly customizable or can't bear to look at Wunderlist's interface (and I wouldn't blame you in either case), Wunderlist is a great way to stop messing with pen and paper, or a million different apps, and finally get your to-do list in order."

From day one, Wunderlist had the advantage of a cross-platform experience. Combined with a freemium model, cloud synchronization, and collaboration features, it offered a no-nonsense approach to productivity that was too good to pass up.

Wunderlist boasted a beautiful (at least at the time) UI and a degree of customization that was just enough to make it cozy without getting in the way. 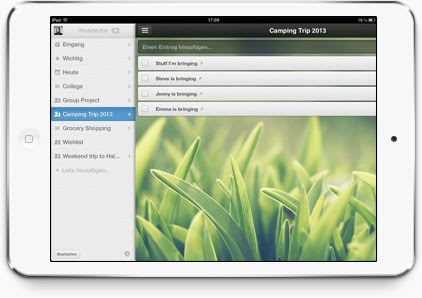 \
Wunderlist 2 for iPad by 6Wunderkinder(16)

Other notable Wunderlist features included push notifications, drag-and-drop interface, a line-up of solid mobile apps, and a Chrome extension. While these are all standard today, they made the app a strong all-rounder back in the day 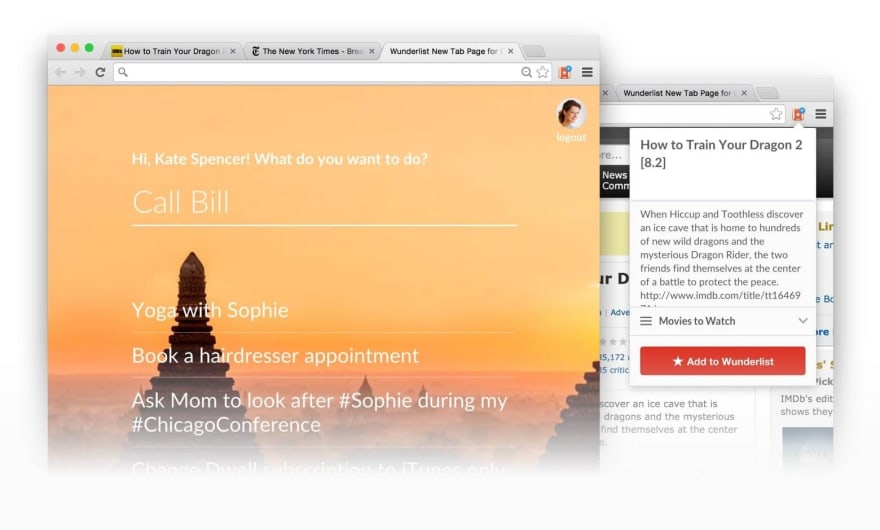 All that helped 6Wunderkinder's software achieve a cult-like status among knowledge workers and productivity enthusiasts. And love is still in the air. Although the app is dead, many users are still looking for a solid Wunderlist alternative.

Taskade is one simple tool (yes!) that allows teams to manage projects, brainstorm ideas, assign and track to-dos, and video-chat together seamlessly, with everything syncing in real-time across all devices. It's the best Wunderlist alternative in the wild. 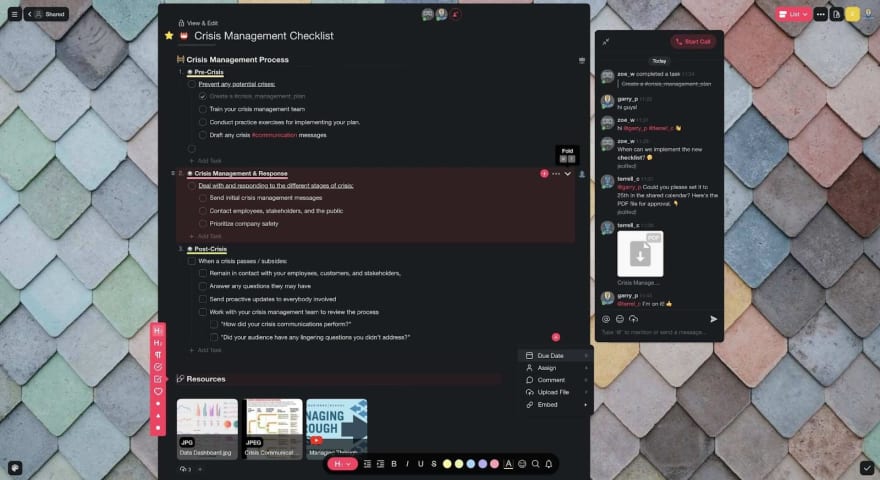 Taskade combines a user-friendly, intuitive interface with a fine selection of productivity and collaboration features designed for the modern knowledge worker.

And the best part? Taskade draws on the legacy and history of Wunderlist. It offers a gentle learning curve and plenty of headspace for advanced users. It's everything you need to get work done.

So, why wait any longer? Sign up for a free account today. You can also take us for a test ride by visiting the Live Demo page. Oh, and don't forget to visit our Compare page to learn why Taskade is the best Wunderlist alternative in 2021.

Our Favorite Dev Tools at Codesphere