1.Loops : Loop executes the sequence of statements many times until the stated condition becomes false. A loop consists of two parts, a body of a loop and a control statement. The control statement is a combination of some conditions that direct the body of the loop to execute until the specified condition becomes false. The purpose of the loop is to repeat the same code a number of times. 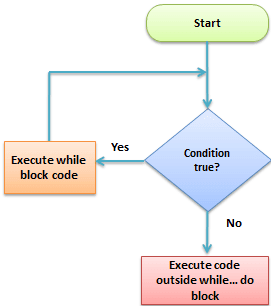 ->Thus, to avoid this situation the control conditions must be well defined and specified otherwise the loop will execute an infinite number of times.
->The for loop is traditionally used for this purpose. Since none of the three expressions that form the 'for' loop is required, you can make an endless loop by leaving the conditional expression empty.

5.For loop in more detail:
->for loop can have multiple expressions separated by commas in each part.

->we can skip the initial value expression, condition and/or increment by adding a semicolon.

6.Nested Loop:-using one loop inside another loop.
->nested for loop:

->nested do while loop:

->you can put any type of loop inside any other type of loop. For example, a 'while' loop can be inside a 'for' loop or vice versa.

NOTE : In some versions of 'C,' the nesting is limited up to 15 loops, but some provide more.

7.Loop Control Statements :change execution from its normal sequence. When execution leaves a scope, all automatic objects that were created in that scope are destroyed.

->The break statement is almost always used with if...else statement inside the loop.

8.2 Continue : The continue statement skips the current iteration of the loop and continues with the next iteration. Its syntax is:

->The continue statement is almost always used with the if...else statement.

8.3 Go to:
->Transfers control to the labeled statement.
->The label is an identifier. When the goto statement is encountered, the control of the program jumps to label: and starts executing the code.
->Here label can be any plain text except C keyword and it can be set anywhere in the C program above or below to goto statement.

NOTE : Use of the goto statement is highly discouraged in any programming language because it makes it difficult to trace the control flow of a program, making the program hard to understand and hard to modify. Any program that uses a goto can be rewritten to avoid them.

Your guide to REST API versioning in ASP.NET Core