MVC is an acronym that gets used a lot around the developer community especially with those who are full stack developers. By the end of this post you will be able to understand at a high level what an MVC is and why its so popular among developers.

So what exactly is an MVC?

Simply put, MVC is an acronym that stands for Model, View, Controller. It's a software architectural design pattern for organizing your code into three different sections or parts that work interdependently. 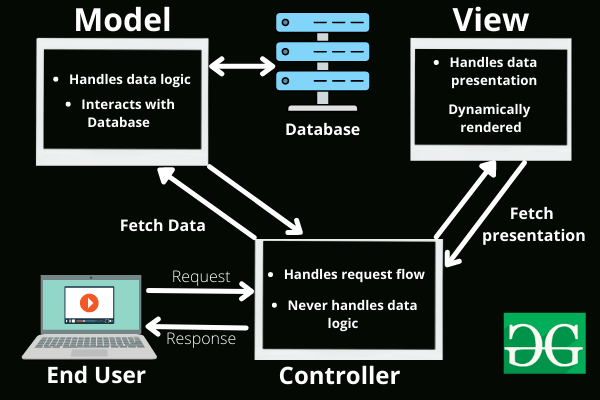 Model: The model purpose is to manage all the data for the application. It handles all business logic and notifies the view whenever something in the database was changed so it can render it for the client to see. The model works with Databases such as MongoDB or Postgresql.

View: The view purpose is to contain all the user interface logic for the application. It takes the data from the model and display it on the screen for users to see and interact with. The view usually contains code usually written in a frontend framework such as React, Vue, or Angular.

So now that you understand what the MVC model is lets take a look at why its so popular...

Why is the MVC model so popular?

One of the main reasons that the MVC pattern is so popular is because of its flexibility and organization. As I explained before, every component or piece of the MVC model is separated and work interpedently. The reason this matters is because this allows you to modify each part without effecting another. For example, if you decide to change the view in your application from Angular to React, you'll have a lot easier of a time doing so since the View piece is abstracted. Similarly, if you wanted to switch your database from MongoDB to MySQL, you can do this in the model without having to make huge changes across other pieces of your code. Another huge reason is because of the modularity the MVC pattern offers you can have more than one developer work on an application together. You could have someone working on the view while another developer could be working out the logic for the model.

How to hack simple smart contract in the TON blockchain

A hacker view of your github profile

Once suspended, ssaryonjr will not be able to comment or publish posts until their suspension is removed.

Once unsuspended, ssaryonjr will be able to comment and publish posts again.

Once unpublished, all posts by ssaryonjr will become hidden and only accessible to themselves.

If ssaryonjr is not suspended, they can still re-publish their posts from their dashboard.

Once unpublished, this post will become invisible to the public and only accessible to Sam Saryon.

Thanks for keeping DEV Community 👩‍💻👨‍💻 safe. Here is what you can do to flag ssaryonjr:

Unflagging ssaryonjr will restore default visibility to their posts.